Andrew Scheer, Elizabeth May and Jagmeet Singh challenged each other on big, powerful issues—and, of course, directed fire at the prime minister who wasn’t in the room 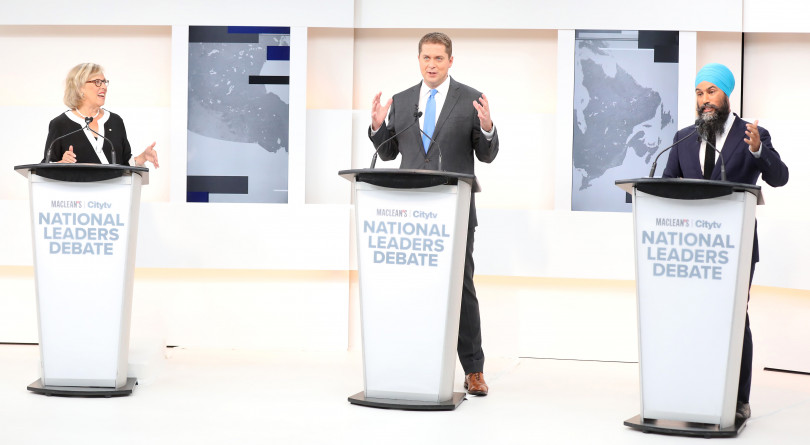 Three federal leaders split a four-pronged National Leaders Debate that covered a lot of ground: the economy; Indigenous issues; energy and the environment; and foreign policy. At times, they barely acknowledged each other, peering directly into the cameras and ignoring the sniping from across the stage. But they also challenged each other on big, weighty issues—and, of course, directed fire at the Prime Minister, who wasn’t in the room. We’ve found nine must-see moments that showcased the best hits and worst whiffs of the night for Andrew Scheer, Jagmeet Singh and Elizabeth May.

When she sat down with Paul Wells for a Maclean’s Live interview in the spring, May suggested a novel sentence for SNC-Lavalin should the engineering giant be convicted on fraud and corruption charges: force the company to ensure clean water is available to every First Nation in Canada that struggles with boil-water advisories. Singh came prepared to smack down the idea at his first opportunity. “To suggest that we should build public infrastructure through punishment of a multibillion-dollar corporation is a ludicrous idea,” he said. “We should be building public infrastructure through public dollars.” May insisted her proposal “took the profit out of” SNC’s hands, asking Singh who he thinks builds infrastructure on First Nations—and said the NDP released a statement falsely accusing the Greens of attempting to “privatize water.” That apparently didn’t bother Singh, whose final retort was blunt: “You can just accept it’s a bad idea.”

Asked about the UN Declaration on the Rights of Indigenous Peoples, Scheer called much of the document “laudable,” and said Tories would support many parts of an NDP private members bill meant to adopt UNDRIP. But he drew a hard line in the sand. “We cannot create a system in this country where one group of individuals, one Indigenous community, can hold hostage large projects that employ so many Indigenous Canadians,” he said, claiming the NDP bill would’ve made large resource projects impossible. He cited mining as a large employer of Indigenous people, and pointed to 37 contracts signed with Indigenous people along the route of the cancelled Northern Gateway pipeline. Soon after, Singh attacked Scheer’s use of language—particularly that bit about holding anything hostage—and said Indigenous people deserve more genuine consultation.

3. Singh dodges a question about a massive LNG investment

When Singh took over the federal NDP leadership, he inherited an internal party spat—not at the federal level, but between two provincial cousins. In Alberta, then-NDP premier Rachel Notley was pushing hard for pipelines that would pump Alberta bitumen to western ports. John Horgan, whose B.C. NDP won power in 2017, was dead-set against the Trans Mountain pipeline, the very project Notley was backing aggressively. Horgan did, however, support a $40-billion investment in liquefied natural gas in northern British Columbia. Where did Singh fall in the tussle? At a Maclean’s Live interview with Wells in 2018, Singh artfully dodged the question, praising Notley for sticking up for Albertans—and Horgan for sticking up for his constituents. Singh, like Horgan, opposes Trans Mountain. But pressed by Wells at the Maclean’s/Citytv debate on where he stands on the LNG project—which, May interjected, is foreign-owned, would ship jobs offshore and would also belch carbon emissions—Singh once again didn’t answer directly. “What I can tell you is we would end all fossil-fuel subsidies,” he said. “And we need to be investing in clean energy.”

4. May notes that the other leaders don’t understand climate science

In Elizabeth May’s impassioned take on energy and the environment, she stressed the importance of moving away from fossil fuels and asserted that the other leaders—including Justin Trudeau—don’t understand climate science at all, let alone have adequate plans to combat the challenge. If they understood “the peril we’re in right now as a human family on this planet,” she said, they’d know that proceeding with Trans Mountain is absolutely off-limits. She also outlined how the current government is subsidizing a project that will create 125 million extra tonnes of additional carbon emissions and the job-creating pipeline is owned by multinationals—including China, where she says that many of the jobs would actually be created.

5. May on what it would take for her to support a minority government

Moderator Wells started off recounting an earlier statement from May saying she would not support a minority government led by any of the other parties, which the Green Party leader said is not what she meant. She said the bottom line for Greens isn’t about power, it’s that whatever parliament is formed this fall must be committed to holding to a 1.5 C global warming limit. That feat would require a huge and drastic commitment, she added, that none of the parties are seemingly willing to make. Partisanship has stalled climate action, she said. “It’s time for some courage, it’s time for some bravery, it’s time for saying this is what we must do for our kids, so we will do it.”

6. Singh says only he would stand up to Trump

Singh occasionally tried to weave together a refrain from New Democrats going back decades that Liberals and Conservatives aren’t much different. One of his stronger moments saw him accuse both Trudeau and Scheer of failing to call out Donald Trump’s immigration policy. He didn’t mince words. “A massive failure of Mr. Trudeau is to not stand up to a leader of a country, Mr. Trump, who is stripping kids from the arms of their parents. To not call that out for the shameful act that it is shows weakness,” said Singh. “And the fact that Mr. Scheer stands here today and is not willing to condemn Mr. Trump for his horrible treatment of human beings…is another example of how he is no stronger than Mr. Trudeau.” For most of Singh’s answer, Scheer stared straight ahead—and didn’t manage to counter the claim before Wells cut off cross-talk between the three leaders.

7. Elizabeth May and Andrew Scheer face off on China

Andrew Scheer started off strong in his statements about what Canada should do about its China problem, speaking directly to the camera and throwing in some swipes at the PM, saying there are specific things governments can do to stand up for its country’s interests, “something Justin Trudeau has failed to do.” He didn’t elaborate on those “very specific things,” however. He also said that he’d take the steps necessary to show China that if they start blocking exports (as they have done already with meat), we as a country “will stand up for ourselves.” He again did not elaborate on what those steps would be. He was then interrupted by Elizabeth May who questioned whether he was really that well-versed on Canada’s economic understandings with China. “You’re misunderstanding what a foreign investment protection act means,” said Scheer, to which May retorted with an exasperated “Oh, really? I’m afraid you haven’t read the Canada-China investment treaty.” It was a restrained and polite, yet heated, exchange.

The Tory leader appeared to have a plan: spend as little time playing defence as possible and, looking directly at the camera, differentiate himself from the Prime Minister who wasn’t in the room. When Wells jabbed at Scheer’s claim in 2017 that he was pro-Brexit “before it was cool,” and asked if he still felt the same, Scheer was concise, and perhaps purposely bland. “I’m always in favour of countries being able to chart their own destiny and control their own internal affairs. It’s now up to British lawmakers and the British people to determine what happens next,” he said. Then he set his sights on Trudeau, reviving some of the PM’s foreign policy nightmares of the last several years. “My focus is on restoring Canada’s place in the world,” said Scheer. “We just talked about difficulties we’re having with China. It’s no wonder that the Chinese government doesn’t take Justin Trudeau seriously, after he clowned around in India, and after he accepted concession after concession after concession to Donald Trump without getting any wins back for Canada.”

Among federal party leaders, only Maxime Bernier opposes Canada’s current immigration levels vehemently. But that hasn’t stopped Scheer’s opponents from attacking his position, particularly given the Tories’ opposition to the UN Global Compact on Migration. Scheer attempted to make his case. “I will continue to ensure that Canada has an immigration system that welcomes people from all around the world,” he said, citing three pillars: fairness, order and compassion. May interjected, accusing Scheer of treating asylum claimants as “illegals” at the Canada-U.S. border. He responded to the Green leader in no uncertain terms. “There’s nothing compassionate about forcing people to wait longer who are in refugee camps, in places where there is civil war, where they will be killed if they leave those camps—where they have to wait longer because some people are skipping the line and jumping the queue.” No doubt that statement will have much of his conservative base nodding and many of his opponents shaking their heads. Singh and May both piled on before Wells ended things and moved on.