Paul Wells: Who knows what Trudeau and a President Biden could do together? The potential is real—not just for lowered tensions across our border, but for the two countries to work together around the world. 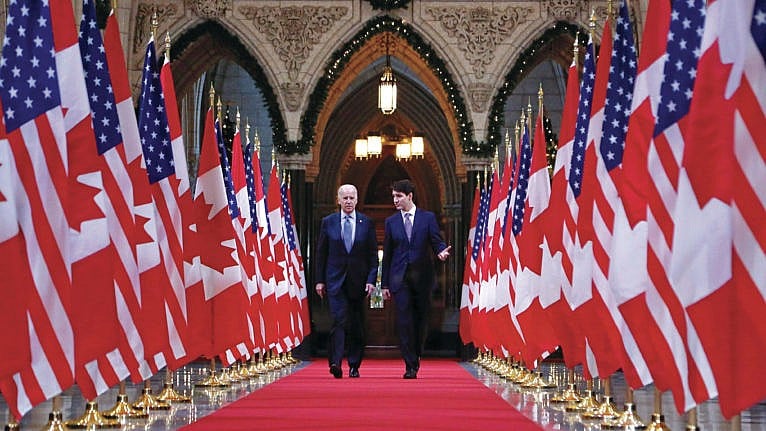 Will Biden and Trudeau have a longer stint of both being in power than they did in 2016? (Patrick Doyle/CP)

Don’t bank on this, but there’s a chance that the big political story of 2021 will be a return to co-operation and trust at the executive level of the Canada-U.S. political relationship.

Donald Trump’s presidency was so strange and unprecedented that it ends, for Canada, with a sense of relief. He came to office calling NAFTA “the worst deal ever” and threatening to close America’s borders against any number of perceived or imagined menaces. Before Trump’s inauguration, the television huckster and erstwhile Conservative leadership candidate Kevin O’Leary liked to say negotiations between the Park Avenue business titan and the schoolteacher prime minister would be like “Bambi vs. Godzilla.”

In the end, much of Godzilla’s radioactive fire-breath simply blew back on him. Bambi, meanwhile, turned out to have some chops, salvaging NAFTA and keeping the border open until COVID-19 turned closing the border into an eminently sensible mutual decision. Now along comes Joe Biden, who knows Ottawa, likes Justin Trudeau, and brought no conspicuous anti-Canadian grievance with him onto the campaign trail. This simplifies life.

READ: President Biden and a world of trouble

But 2021 holds more potential than that. As a rule of thumb, Canadian prime ministers and American presidents get along better when both come from similar political families: Democrats work better with Liberals, Republicans with Conservatives. It’s always a lopsided partnership, with the southern partner wielding most of the clout and the shortest attention span, but often it’s greatly helpful to the Canadian leader. Bill Clinton and Jean Chrétien, a Democrat and a Liberal, had a real partnership, not just on cross-border issues but global ones. So did Brian Mulroney and Ronald Reagan, a Progressive Conservative and a Republican. Franklin Roosevelt and Mackenzie King, same deal. John Diefenbaker and John Kennedy didn’t get along at all, in contrast, and Kennedy has long been suspected of actively working to get Lester Pearson’s Liberals elected in 1963. Similarly, both Reagan and Richard Nixon had tense relations, at best, with Justin Trudeau’s father.

Now here’s the thing. It’s nobody’s fault, but Canada and the U.S. have spent most of the last two decades in an extended series of bad matches at the head-of-government level—George W. Bush and Chrétien, Bush and Paul Martin, Stephen Harper and Barack Obama, Trudeau and Trump. That’s not the whole story, but for much of that time, the occupants of the White House and 24 Sussex Drive regarded each other more as problems than as potential solutions.

There were actually high hopes in Chrétien’s Prime Minister’s Office when Bush became president after the 2000 election. Bush’s vice-president, Dick Cheney, was an oil man with a mandate to secure energy supplies. Chrétien had oil-sands oil to sell, and fewer compunctions than some of his successors about selling it. But 9/11 derailed all that, and Chrétien’s decision to sit out the Iraq war put the end to cordial relations. Martin continued Chrétien’s standoffish approach, declining to participate in U.S. missile defence. Harper fell out with Obama over the Keystone XL pipeline. Trudeau did everything to get on Trump’s good side, but even on their good days the two got on like snakes in a jar.

Harper did overlap with Bush for three years, but Bush and his Iraq war were desperately unpopular with Canadians when that period began in 2006. Harper kept his distance. Bush noticed and resented the impression that he had a fair-weather friend on his hands. And Justin Trudeau was Prime Minister for Barack Obama’s last year in office, but that wasn’t enough time for a lasting thaw.

Now, who knows what Trudeau and a President Biden could do together? In foreign affairs, on issues such as rehabilitating NATO, consolidating continental trade and aspects of a common environmental agenda especially, the potential is real—not just for lowered tensions across our still-closed border, but for the two countries to work together around the world.

Realizing the potential would require real work. To a greater extent than the Trudeau crew would like to admit, Trump’s presidency gave them a handy excuse to limit Canada’s global ambitions. Trudeau’s early dream of renewed Canadian ambition on peacekeeping sputtered to a near halt with a late, limited airlift deployment to Mali. Holding the line on global trade seemed like virtue next to Trumpian protectionism. “We were busy saving NAFTA” became the Trudeau team’s excuse for everything they missed in 2018.

It’s safe to assume a Biden White House won’t be impressed with the kind of Canadian contribution that world-weary Washingtonians have summed up with a familiar shorthand: “All assistance short of help.” Reagan and Mulroney ended a century-long deadlock over bilateral free trade. Chrétien and Clinton worked hard to extend that project into hemispheric free trade, and backed each other up in multilateral forums. A Biden-Trudeau partnership, if it’s to be memorable, would need to accomplish more than a few amiable Zoom calls.

For that to happen, structural change in the Trudeau government will be needed, including undoing most of what Trudeau implemented to respond to Trump’s election. The unquantifiable Trump threat required Ottawa to go into a huge institutional defensive crouch. Chrystia Freeland, probably the Trudeau minister best known in Washington, replaced Stéphane Dion as global affairs minister. Senior Liberal staffers were assigned full-time to monitoring Canada-U.S. relations, including the addled president’s Twitter account. Trudeau’s closest advisers, Gerald Butts and Katie Telford, were in Washington as often as in Ottawa. Harjit Sajjan, the defence minister, became incapable of making a decision without testing the Pentagon’s response. (As often as not, the answer was that the Trump administration was so far from having plans that nothing Canada did could upset them. But by then the habits of learned helplessness were well entrenched.)

Even after Freeland stopped being the global affairs minister for most of the globe, she retained responsibility for the Canada-U.S. relationship. That sort of made sense—well, at least a bit—while the U.S. remained a unique and unpredictable menace. During a Biden administration, it will make less sense to keep the U.S. and the rest of the world in separate conceptual and operational silos. Decisions made in Washington, or with it, will need implementing elsewhere. François-Philippe Champagne, who studied law in Cleveland, has earned the right to be a global affairs minister in full.

There will still be irritants. Biden opposes the Keystone XL pipeline, and seems set, inevitably, on calling the bluff of Trudeau, who asserts his support for the Canadian pipeline into U.S. territory without ever doing much to advance its prospects. If a post-COVID skepticism about the reliability of global supply chains translates into new protectionist impulses in the U.S., Canada will need to work to stay inside a continental North American supply fence, rather than stuck outside.

And of course, all of this presumes the Liberals’ parliamentary minority holds beyond the first few months of 2021. Erin O’Toole will be hard at work ensuring it works out differently. Then a Canadian prime minister and American president from different political currents would have to figure out how, or whether, to get along. Of course, both countries have had a lot of practice lately at doing just that.

This article appears in print in the January 2021 issue of Maclean’s magazine with the headline, “Relationship advice.” Subscribe to the monthly print magazine here.