A fiery segment on identity spices up a cordial debate

Politics Insider for Sept. 9, 2021: An intense Trudeau; some questions about the Tory platform; and a very tight poll 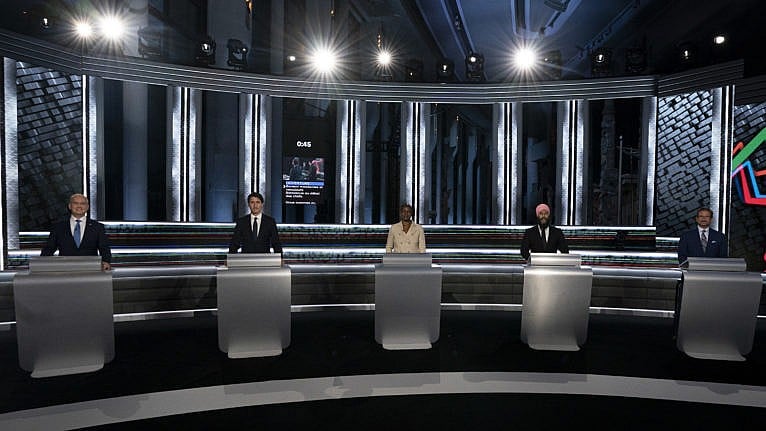 According to La Presse’s lead story, (translation) the most interesting moment of Wednesday night’s French language debate was an exchange between Justin Trudeau and Yves-François Blanchet, with Trudeau asserting his status as a Quebecer.

The most animated portion of the exercise will undoubtedly have been the one between Justin Trudeau and Yves-François Blanchet on the question of Quebec identity. The leader of the Liberal Party was stung by a remark from his Bloc opponent, who wanted to pick up on part of the Prime Minister’s response concerning aboriginal identity. “I am proud Quebecer, I have always been Quebecer, I will always be Quebecer, and I am here with my say. You don’t have (a monopoly) on Quebec. There are several of us representing Quebec in the House of Commons,” Justin Trudeau ignited. “When you say you don’t want federal interference in Quebec, and then you take the government’s record as your own, that’s a deep contradiction. No, you will not accuse me of not being a Quebecker, Mr. Blanchet,” he thundered again, which earned him a “Decompress there, decompress there, relax, relax, relax” on the part of Yves-François Blanchet.

The Globe story focuses on another attack launched by Trudeau, this one on Erin O’Toole, whose plan to kill the Liberals’ child-care deal with the Quebec government came under pressure.

Justin Ling writes in Maclean’s that O’Toole found himself in trouble because there’s a big hole in his costed platform.

And at an over-produced, stilted all-leaders French-language debate on Wednesday night, O’Toole found himself pitching things that were nowhere to be found in his five-year spending document, which he released earlier in the day. What’s more, he found himself taking flack for it. Liberal leader Justin Trudeau said the Conservative’s spending engagements are proof that O’Toole is “not delivering on any of the things that Canadians need.” Bloc leader Yves-François Blanchet chided the Conservatives for “dropping your platform two weeks late, and to changing it the next day.”

Althia Raj, who is newly at the Toronto Star, writes in an inaugural column that Trudeau’s attacks on O’Toole failed to connect, highlighting some attacks by Jagmeet Singh.

But perhaps Singh’s most devastating line of attack was one that has taken a toll on Trudeau over the first three weeks of the campaign: the timing of the election call. “It was a bad decision,” Singh told the audience. “It was for an egotistical reason. It is not the right thing to do,” he said, referring to the Liberals’ desire for a majority government. If the Liberals want another mandate, Trudeau must convince voters that the ballot question shouldn’t be a referendum on him — whether voters like him or support this election — but rather on O’Toole and whether they like the policy agenda the Conservatives propose.

Your correspondent thought Trudeau’s emotional attack on Blanchet might help polarize the battle for Quebec votes between Liberals and the Bloc, squeezing out the Tories and NDP, but only the polls will tell us that, in the days ahead.

Tory plans: On the day of the French debate, the Conservatives revealed the costing details of their platform, promising lower deficits by spending less on child care and boosting payments through the low-income workers’ benefit, the Globe reports. The plan is more than $51-billion in net new spending (including tax credits, and some cancelled Liberal programs) over five years, compared to the $78-billion in new spending promised by the Liberals.

One of the biggest differences between the Conservative and Liberal platforms is how much the parties would spend on child care. The Liberals propose spending $29.8-billion over five years to launch a national, $10-a-day child-care program. The Conservatives would scrap that program and instead, commit to a tax credit to help cover child-care costs that is estimated to cost the treasury $2.6-billion over five years. Until now, Mr. O’Toole has avoided saying what a Conservative government would do with the child-care deals that the Liberals signed with some provinces while in government. At the Wednesday technical briefing, the officials said the provinces would be allowed to keep the money that was expected this year, but the deals would be scrapped after that.

Neck and neck: Leger, the Canadian pollster most highly rated for accuracy by Maclean’s poll prognosticator Philippe J. Fournier, has a new poll out in the Post and it shows a tight race: CPC 33, LPC 33, NDP 21, BQ 6, GPC 3, PPC 3. The poll — of 3,000 Canadians via an online panel Sept. 3-Sept. 6 — shows the Tory lead gone, likely because of the debate over gun control, says Andrew Enns: “The O’Toole campaign got caught up in the gun control debate and that wasn’t as cleanly handled. I think that maybe ultimately took the momentum away from the Conservatives and gave a little bit of air and oxygen to the Liberals.”

Protests working: Pollster Nick Nanos says the protesters following Justin Trudeau around are succeeding in disrupting his campaign messaging, CTV reports: “I think it’s had an impact on the Liberal campaign and the Liberal messaging for sure. These folks are basically on a mission to defeat Justin Trudeau and to disrupt his campaign and, at least in terms of disrupting the campaign, they’re doing a pretty good job because he’s talking about them.”

Saini process to be probed: House of Commons clerk Charles Robert, the senior parliamentary official, has agreed to a request to investigate the handling of former Liberal candidate Raj Saini’s case, CBC reports. Conservative MP Michelle Rempel Garner wrote to Robert last week to ask whether that process was conducted properly, since the complainant who triggered a 2020 workplace assessment of Saini’s office said she was not interviewed. The CBC also has comments from Liberal whip Mark Holland, who discusses some details from the case and urges caution. Saini ended his bid for re-election after a series of allegations were made public. He denies the allegations.

Gun accusation: Liberal MP Mark Gerretsen has written to commissioner of Canada Elections to ask for an investigation of whether the Conservative Party of Canada is colluding with the National Firearms Association, CBC reports. Gerretsen suggests CPC campaign director Fred DeLorey, a former lobbyist for the NFA, has been co-ordinating campaign activities with the association.

Debating debates: National Post contrarian Colby Cosh has an amusing column questioning the point of having TV debates at all, with an interesting thought about Canadian political culture:

Britain, the original model for our form of democracy, manages to get by with almost no use of them, and this is largely uncontroversial there. Here, we’re too close to the Americans: their political habits rub off on us without notice. Explicitly, we make a political fetish of our differences from them. Implicitly we are constantly making the assumption that if we don’t mimic them in some humiliating or self-destructive way, we may be suspected of being second class.

No more book burning: A French language Ontario school board has stopped its planned book burning after it was discovered that the Indigenous “knowledge keeper” at the heart of the process may not actually be Indigenous, Radio Canada reports. (Translation.) La Presse columnist Isabelle Hachey had a good column about the whole thing on Wednesday. (translation.)