A judge asks for busywork amid a Duffy trial standstill

And so Courtroom 33 hears from a remorseful, 53-year-old landscaper 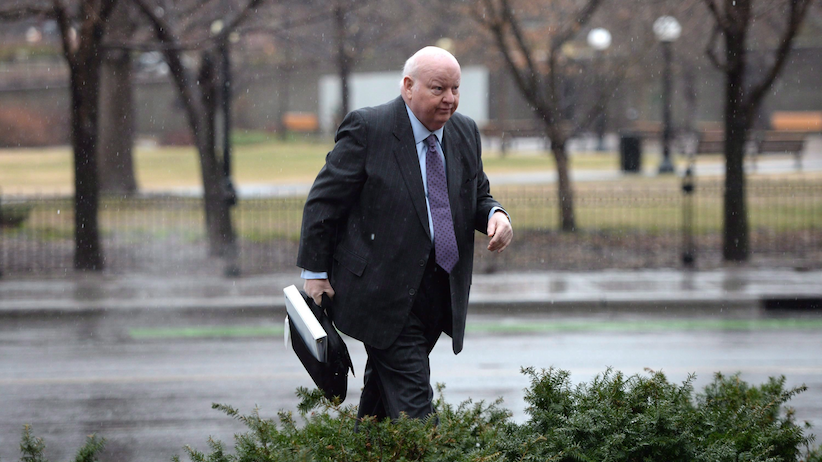 Mike Duffy exited Courtroom 33 early today—the arrival of a lawyer representing, among other media outlets, his old employer, CTV, had halted his trial’s progress—and in his place came a 53-year-old landscaper, here to plead guilty to a charge of impaired driving. The gallery was empty, without the press and representatives of the Senate of Canada, like a chessboard cleared of its pieces. It was an eerie scene, this empty room—one in which justice, for a moment, actually appeared in motion.

What a difference a Duffy makes.

The suspended senator’s early leave-taking, on the very day his trial had been meant to resume after a three-week adjournment, and then his replacement with a clearly remorseful man arrested after having driven his Ford F-150 into a ditch in March, demonstrated how limping, how directionless, how occasionally farcical the Duffy trial has become. Watching a courtroom work: well, it was surreal. It reminded a court reporter what it’s like to watch something with a point that’s worth writing about.

And it all unfolded against the backdrop of machinations beyond the room: the anticipation of an auditor general report this week into senators’ spending, and the emerging likelihood that the Duffy trial will continue in August, raising the spectre of a Nigel Wright appearance in the witness box just prior to the coming federal election.

But, this morning, in the wake of the Duffy departure, Justice Charles Vaillancourt, the very man presiding over the suspended senator’s trial, remained: He’d asked that the Crown’s office send a little work his way, given the state of rickety standstill in the Duffy trial he’s here from his home in Toronto to adjudicate.

And so the landscaper appeared. Vaillancourt attacked the problem of his plea with the same unfussy attention to detail he’s shown since arriving in Ottawa in April.

The landscaper was stocky, with salt-and-pepper hair. He sat upright in the first pew on the judge’s far right, a man apparently resigned to a duty imposed upon him by his own bonehead past.

Representing the landscaper was, funnily enough, Solomon Friedman, a criminal defence lawyer frequently called into service on TV news programs to comment on the Duffy trial that normally occupies Courtroom 33. At the prosecutor’s lectern was Mark Holmes, the Crown handling, along with Jason Neubauer, that very matter.

The landscaper was travelling southbound on Dwyer Hill Road at around 9 p.m. when he ran his pickup into a ditch, nearly flipping it. When a man stopped to help, he smelled alcohol on the driver’s breath, then witnessed him stumbling as he walked. Ottawa police arrived and, in the field and later, after his arrest at the station, administered a series of tests. An hour after the accident, the man’s blood alcohol measured 150 mg per 100 ml.

Friedman agreed to these facts.

“Is there any pretrial custody in this matter?” inquired Vaillancourt.

Friedman explained that the landscaper—actually, the general manager of a landscaping business at the time of his arrest—had lost his job because he could not drive in the wake of the charge. He had no criminal record and was “polite, calm, co-operative” in his dealings with police. He was taking this early opportunity to plead guilty.

“I just wish to apologize for what’s happened here today,” the man said after Vaillancourt asked whether he had anything to say.

He said a few more words. Altogether, it was more than Duffy, who’s facing 31 charges of fraud, breach of trust and bribery, has said in or out of court in 23 days of trial.

Friedman asked that his client be levied the minimum fine. Holmes agreed that was appropriate.

Vaillancourt gave the man six months to pay $1,000, plus the victim fine surcharge. He won’t be able to drive for a year. And that was that.

It was all so simple. Perhaps it was, because the courtroom was empty. Minutes earlier, it had been the scene of a sort of lawyers-only stampede: They’d spread through the aisles of the place with their rolling briefcases in tow, like a great herd of buffalo ranging across the tabletop of this country’s great western prairies.

Listen to their names, all those who stood before Vaillancourt as members of the Law Society of Upper Canada: It is a roll call so general in its breadth that it recalls the closing minutes of Romper Room, that children’s show with the infernal bee creature, in which members of the audience were addressed at home through the aid of an allegedly magic mirror.

That number of wheelie briefcases is never good for the Crown.

It took Holmes and Neubauer about three whole minutes in front of Vaillancourt this morning to learn that the judge was ruling against them in two matters.

First, a sheaf of paper that Mark Bourrie, an Ottawa freelance journalist, waved around while in the witness box weeks ago, containing Wikipedia entries and discussion threads he said were disparaging of Duffy, won’t be admitted as evidence despite the Crown’s arguments they should be.

Neubauer argued last month that the court required the Wiki papers to ensure the integrity of the record, and he suggested also that their contents weren’t nearly as rotten to Duffy as Bayne had claimed. But, in his ruling, Vaillancourt said Bayne referred to the contents only “marginally,” adding: “I consider them, at best, theatrical props.”

Next, Vaillancourt said he’d admit a Senate report responding to a series of Ernst & Young audits that suggest Senate officials were aware they had expense-claim troubles on their hands, going beyond any single senator. The Crown had called the report inadmissible hearsay. This is good news for Bayne’s defence, and for Duffy.

Then a legal set-to over another Senate report, which Senate lawyers are claiming is covered by parliamentary privilege, was put over until next week, because Vaillancourt granted Tae Mee Park, a lawyer representing a number of media organizations, intervenor status. That’s delayed the preparation of arguments on all sides.

It was a hell of a way to come back to l’affaire Duffy after three weeks away, and it’s fair to say the morning they all spent in Courtroom 33, at Ottawa’s Elgin Street courthouse, stamped itself upon the faces of both Holmes and Neubauer in the form of hangdog expressions.

When Vaillancourt asked whether Crown prosecutors, who’d expected today to get taken up with all those highfalutin arguments over Senate privilege, had any witnesses to call, Holmes shot Neubauer a look that would melt flowers. The Crown didn’t. And so, Vaillancourt called to be given some busywork. Then the landscaper came.