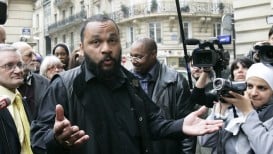 The Canadian singer-songwriter’s Honour the Treaties tour kicked off in Toronto Jan. 12 with a bang—one aimed squarely at the Harper government and oil-sands development. Taking the stage at Massey Hall with representatives of the Athabasca Chipewyan First Nation, the rocker compared the industrial area around Fort McMurray, Alta., to the devastation of Hiroshima, calling it “a disaster to anyone with an environmental conscience.” The Conservative government, he added, is an “embarrassment.”

Just a few months ago, the New Jersey governor was being touted as a front-runner for the 2016 Republican presidential nomination. Now, he’s at the lowest point in his career, enmeshed in an ugly scandal that saw top staffers orchestrate traffic jams to allegedly punish a Democratic mayor. As “Bridgegate” continued to swirl, Christie’s week went from bad to worse: Federal auditors are investigating whether he mishandled $25 million in hurricane Sandy relief funds for a tourism campaign. Not unlike a traffic jam, Christie’s once-unstoppable momentum has slowed.

Just hours before the comic was to take the stage in the French city of Nantes, a top court upheld a ban on his show—pitting free-speech advocates against those who believe he incites anti-Semitism. Dieudonné, as he’s known, has been repeatedly fined for hate speech for shows in which he made light of the Holocaust; critics call the “quenelle,” a gesture he’s popularized, an “inverted Nazi salute.” Dieudonné denies his act is anti-Semitic, and has pledged to fight bans. As ticket-holders booed the cancellation, the comic’s Facebook page urged fans to go home “singing the Marseillaise.”

It doesn’t take much to spark a CanLit uproar. In an interview with New York magazine, the American novelist let it spill that he doesn’t feel Canadian authors are risk-takers. “Maybe they want to please the Ontario Arts Council, or whatever it is,” quipped Shteyngart, who was a judge for the 2012 Scotiabank Giller Prize. Shteyngart later pulled a page from Rob Ford’s playbook, blaming his comments on a “drunken stupor.” As the dust settled, he tweeted: “Canadian day of contrition. Listening to Glenn Gould while eating poutine.”

Awards season in Hollywood is typically filled with grateful speeches, not insults aimed at legendary studio heads. Yet not everyone is Meryl Streep, who used a presenting opportunity at the National Board of Review’s gala to slam the “gender bigot” Walt Disney, played by Tom Hanks in the new film Saving Mr. Banks. Streep was ostensibly honouring Mr. Banks co-star Emma Thompson for her portrayal of Mary Poppins author P.L. Travers. Imagining Disney’s long pursuit of Travers’s work, Streep said, “It must have killed him to encounter in a woman a?.?.?.?superior creature.”