Politics Insider for Nov. 25, 2021: Freeland has a new book; Erin O'Toole gives a 'fiery' speech; and some inflation talk 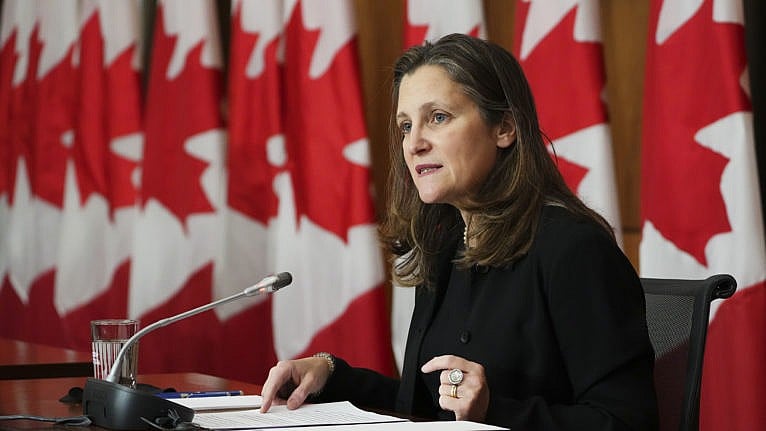 Next Up? The Globe and Mail notes that a new Chrystia Freeland biography in the works “will feed into a growing perception” that the finance minister will gun for the top job whenever Justin Trudeau steps aside. Myriad unnamed sources cite other possible cues in the form of Freeland’s greater responsiveness to backbenchers and a letter she wrote scolding the CEO of Air Canada for crowing that he’d lived in Montreal 14 years without managing to learn French. Other leadership possibilities trotted out include Foreign Affairs Minister Melanie Joly, Innovation Minister Francois-Philippe Champagne and, of course, Mark Carney.

Kids without enough: A new report from the national coalition Campaign 2000 warns that the battle against child poverty in Canada stalled during the pandemic, and the poverty rate of Canadian kids is likely to be even worse now than the latest available tax data shows. As of 2019, 1.3 million Canadian children, or 17.7 percent, were living below the poverty line. “That’s a pretty significant number of kids who are suffering from the harms and the effects of missing meals, not having the right kinds of clothes and parents working really long hours,” Leila Sarangi, the Campaign 2000 national director, told CBC news. Progress on child poverty was one of the big accomplishments of the Trudeau government’s first term, with Statistics Canada estimating that the Canada Child Benefit lifted 278,000 kids above the poverty line in the first full year of the program. But Campaign 2000 is calling on the government to significantly increase the CCB, warning that at the current pace, it will take 54 years to raise all Canadian kids above that bar.

Help wanted: Following through on one of their Throne Speech priorities, the Liberals introduced a bill in the House of Commons on Wednesday that would target specific industries and workers with more precise financial support coming out of the pandemic. The hard-hit tourism and hospitality sectors will get a boost if this measure goes through, and it is one of four pieces of legislation the government hopes to pass in a hurry, before MPs head out on their winter break in mid-December.

Enough is enough: British Columbians have barely caught their breath from the flooding that devastated their homes, infrastructure and lives, and now more severe weather is predicted over the next several days that could make things even worse. Up to 80 mm of rain was forecast for certain areas, along with high winds, snow and fluctuating temperatures that have officials worried about river levels and further flooding. Some highways remain closed, clean water supplies have been interrupted and residents have been warned against non-essential travel as the province braces for more punishing conditions.

Thumbs Down: Conservative Leader Erin O’Toole, unsurprisingly, was not a fan of the government’s Throne Speech delivered on Tuesday. In a “fiery speech” to caucus on Wednesday morning, O’Toole vowed to fight what he portrayed as Trudeau’s assault on prosperity, national unity and the oil and gas industry. O’Toole accused the Liberals of being in cahoots with NDP Leader Jagmeet Singh on a left-wing coalition, and, in keeping with Tory messaging over the last few months, took aim at inflation and the rising cost of living, which he and his MPs have blamed on Trudeau’s pandemic spending.

“What is Justin Trudeau’s response? Instead of standing up for Canadians, we have a prime minister who always puts his own needs ahead of yours,” he said, as CBC reported.

Cost of isolation: A new analysis from the parliamentary budget officer estimates the cost of keeping federal prisoners away from the general population in “structured intervention units” that are supposed to mitigate some of the worst effects of solitary confinement. The PBO says that with the 15 units that already exist, the annual cost of operation will be $42 million in five years, but with up to 32 units needed, the price tag could rise to $91 million a year.

In other PBO news, former PBO Kevin Page, now CEO of the Institute of Fiscal Studies and Democracy at the University of Ottawa, talked to Power & Politics about the factors driving inflation in Canada. In his estimation, high energy costs driven by supply and demand issues, low housing stock and heightened demand as a result of the fiscal supports pumped into the economy during the pandemic are what’s behind Canada’s inflation rate, which is “on the high side” among G7 nations but dwarfed by that of the U.S. Page is sanguine about the potential for things to smooth out if the government winds down pandemic supports soon in order to avoid over-stimulating the economy. “The market is going to have to adjust from a 100-year shock from the pandemic,” he said.