What maternity wear? A look back at the ever-fashionable duchess of Cambridge's pregnancy style

In what would be a picture-perfect pregnancy, Catherine, duchess of Cambridge, effortlessly transitioned the tailored polish for which she’s known into the maternity realm. Very few post-conception tweaks were made to the royal’s sartorial formula as she carried on her public duties—not her preference for high heels or British designers, not her habit of mixing high-street with high-end, not her willingness to repurpose items by moving buttons or removing belts. The message was clear: She was a modern, working woman who happened to be having a baby; she wasn’t reinventing the wheel.

There was one notable change in the duchess’s style as the pregnancy evolved: a subtle raising of the royal hemline that shifted focus to the duchess’s legs and away from her expanding girth. It echoed her tendency to pose for photographs with her hands clasped protectively over her stomach, often with a clutch as barrier. That message, too, was clear: This may be the future monarch, but some lines won’t be crossed. 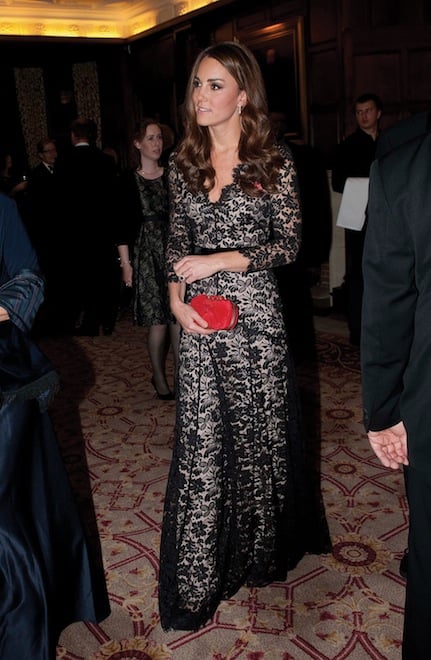 Kate, the Duchess of Cambridge

November 8, 2012: Pregnant but far from showing, in Scotland in an Alice by Temperley black lace gown (Eddie Mulholland/WPA Pool/Getty Images)