A toast to power

Some bars and eateries are famous for the elite customers who broker deals over drinks or who go to be seen. Other spots are less obvious haunts for the well-connected to sip cocktails and hold private meetings in quiet corners of the room. Either way, business moguls and political leaders can alter a watering hole’s fortunes overnight.

Or over 30 years, as the case may be. In Vancouver, the Yew Restaurant at the Four Seasons Hotel is famous for its connection to businessman and philanthropist Joe Segal, who has held a table in the same spot there for three decades. His table inspired a book, Lunch with Joe, by Peter Legge, released in June and based on interviews with 90 of Segal’s lunch guests over the years—a who’s who of the business world, from bank executives to Lululemon founder Chip Wilson. Perhaps it’s hereditary. Segal’s son, Gary, has his own table nearby. Yew, says one Vancouver local, is where the “look at me” crowd goes. The Vancouver Club, a 100-year-old institution, is an exclusive club where the power crowd meets over Scotch, while politicians favour Herons West Coast Kitchen and Bar across from Canada Place–it’s where Premier Christy Clark is known to hang out.

Across the Georgia Straight in Victoria, the Bard & Banker downtown is the place to be seen. Last year it attracted widespread media attention after an incident involving Ken Boessenkool, a former adviser to Stephen Harper who’d become Clark’s chief of staff, and a woman other than his wife.

At the October Conservative convention, the Ottawa press and lobbyists gathered at Calgary’s James Joyce Irish Pub, a popular political hangout where Finance Minister Jim Flaherty is known to frequent whenever he’s in town, and talk at length with regular patrons over drinks. Edmonton MP James Rajotte and cabinet minister Jason Kenney have also been known to sip Guinness at the unassuming pub. “The bar has lots of nooks and crannies to hide in if you don’t want to be seen,” says one informed lobbyist. The Calgary Petroleum Club is another popular spot for the city’s elite.

A toast to power 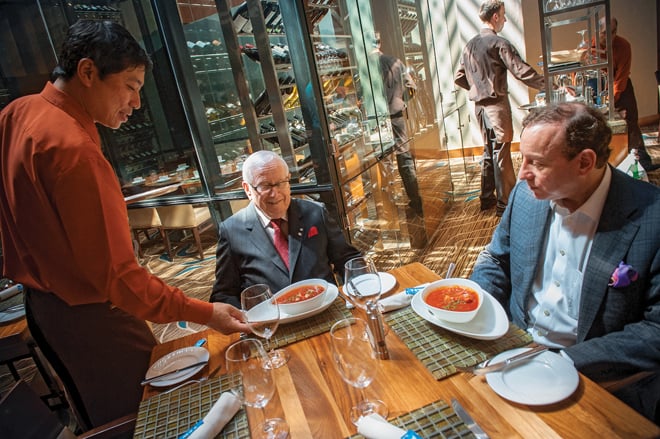 Joe Segal, left and his son Lorne Segal, right at have a bowl of clam chowder at Joe's regular lunch spot, the Yew Restaurant inside the Four Seasons Hotel on Georgia Street in Vancouver, B.C. (Ric Ernst/PNG)

Ottawa has no shortage of watering holes for the power crowd—some fade in and out as governments change but spots like Hy’s Steakhouse remain the go-to places for MPs, senior journalists, and hangers-on around Parliament Hill. Mamma Teresa Ristorante has famously been the Liberal hangout for years, discovered by a senior Liberal adviser who went in one night on his way home from work and was smitten by a dish of cannelloni. John Turner, Brian Mulroney and Pierre Trudeau all ate there while in power.

Other places have taken prominence under the Conservatives, namely Play and Metropolitan, both on Sussex Drive and frequented by many MPs, cabinet ministers, lobbyists and Hill scribes. Brixton’s British Pub downtown is where the NDP crowd hangs out.

The Parliamentary Restaurant, reserved for those who work on the Hill—MPs, senators, reporters—and their guests, is also a famous power spot located an elevator ride up from the House of Commons chamber. Political parties hold court in alcoves off to the side when discussing private business over lunch. It’s known for its so-called “voices” because sound bounces off the glass domes on the ceiling of the sixth-floor room and conversations can be heard at other tables, making it a good place to pick up gossip or insider information.

Book launches at various bars in Ottawa and Toronto have become increasingly popular venues for the A-list crowds.

In Toronto, the Albany Club is popular with the political crowd and the Chase, a swanky place in the financial district, is the in spot if you have power or want to be around it. The Chase is the “hot expense-account place,” says Shinan Govani, who wrote a social diary for the National Post. He also includes Toronto’s exclusive club Soho House on the list. “It’s the kind of place where I’ve seen everyone from Mark Carney to Justin Trudeau to Drake. It’s a broader scope than the old-school watering holes, but that’s the nature of power these days.”

In St. John’s, Danny Williams and Mark Critch can be spotted in Blue on Water, while the Duke of Duckworth is another place to find prominent local media. Deals are often struck at Raymonds.

In Quebec, Holder in Old Montreal is a favoured lunch and dinner place for politicians and bankers and other movers and shakers, while the showbiz crowd goes to Leméac. Those who want to be seen gravitate towards Buonanotte, Santos and Cavalli, a downtown restaurant and nightclub where the former minister of foreign affairs Maxime Bernier first met his ex-girlfriend, Julie Couillard.

After the Nova Scotia election, both the provincial Liberal and Conservative caucuses held dinners at the local Bâton Rouge (it has another political connection as federal Liberal MP Scott Brison’s husband is an investor). The restaurant, along with Bicycle Thief and Chives are magnets for big decision makers, be they political or business leaders in Halifax. Off the beaten path in Nova Scotia, former Canadian ambassador to the United States Frank McKenna hosts an annual networking event at Fox Harb’r golf and spa resort, an 1,100-acre property owned by Ron Joyce, co-founder of Tim Hortons. Former American president Bill Clinton and hockey legend Wayne Gretzky have attended in past years. This upscale locale not only serves nice drinks and attracts the movers and shakers, it also has its own private airstrip, making it, perhaps, the ultimate power location.