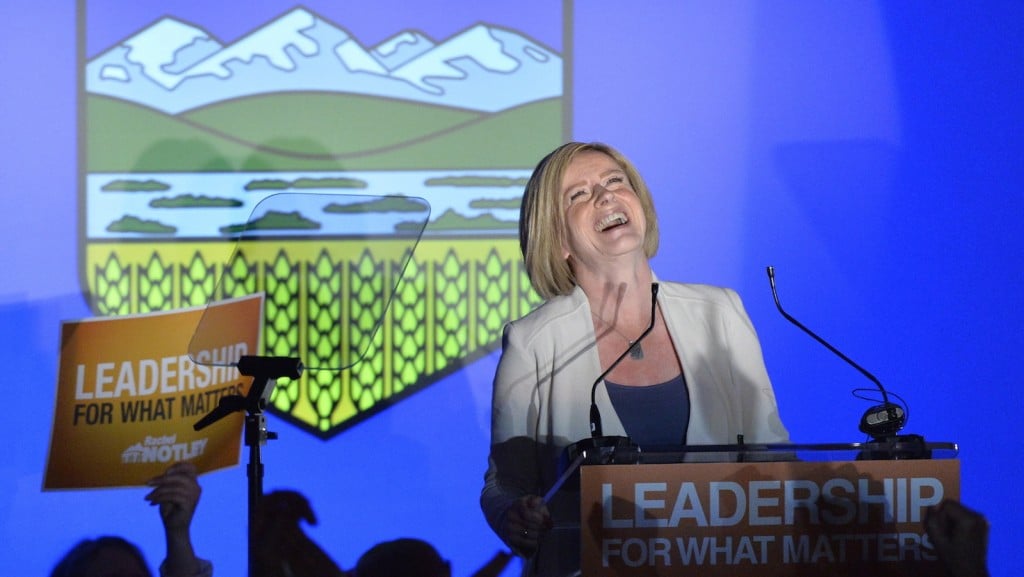 EDMONTON – Rachel Notley knew a week before voting day that she was going to shatter the Progressive Conservative dynasty and become Alberta’s 17th premier — and it hit her like a punch in the stomach.

She was in a hotel room that night on the campaign trail in Calgary or Lethbridge — she doesn’t remember where — when she saw a new poll that put her NDP team well out in front.

It wasn’t one of those angry-person punch-button polls, but one that was expansive and credible.

Her advisers had handed it to her hours earlier, but only now did she have time to analyse it.

And there it was, shining through lines of impersonal data.

She was going to win.

“I suddenly realize that this could happen,” said Notley in an interview with The Canadian Press.

“My stomach gets very sore and suddenly I go, ‘Oh my Lord. We have so much to do.’ ”

She remembers pacing in the empty suite. What to do? What to do? She dialled up her husband, Lou, and started talking.

The plan had been to run 18 hours a day in the last week of the campaign, then collapse in exhaustion on polling day.

At this rate, Notley feared, the day after the vote Canada would wake up to a frazzled hollow-eyed husk of a new Alberta leader nodding off at the podium.

“You’ve got to talk to your people,” she remembers Lou telling her.

Notley phoned up her campaign director Gerry Scott and told him, “We need to pull out of a bunch of different events and start planning transition.”

It was an election campaign that saw Notley, 51, lead the NDP to a 53-seat majority after the party had only nibbled at the fringes of power for almost its entire history.

The NDP had polled strongly from the beginning, running a family-focused campaign of hiking taxes on the corporations and the wealthy while reinvesting in education and health care.

Premier Jim Prentice and the PCs ran on his budget of across-the-board tax hikes and user fees except on corporations and oil companies. There were cuts to health care and no money for thousands of new grade school students.

Political analysts said the mid-campaign leaders debate galvanized and crystallized support for Notley. She bested Prentice with one-liners, hammering home key points while rebuffing his attempts to foster fear of the NDP as architects of an economic apocalypse.

Related: Paul Wells on how Rachel Notley monopolized a moment

It was a bravura performance considering how downright petrified Notley admitted she had been — the glaring spotlight, hundreds of thousands of viewers watching her every move.

In the hours before the debate, she drank tea in a friend’s garden to help calm her nerves, but at the studio her stomach was still a stiff knot.

In the days prior, Prentice had focused on trying to blow holes in the opposition Wildrose budget plan. So Notley’s team realized if they were going to score points, Notley was going to have to fight to be heard.

In the debate run-throughs, key adviser Brian Topp subbed in for Prentice. And as Prentice, he literally turned his back to Notley for long stretches as they rehearsed ways for her to break though.

But on debate night, as the cameras zoomed in, Prentice literally turned his back on Wildrose Leader Brian Jean and attacked Notley instead.

“I’m thinking: ‘Way to go, Topp. No one planned for this eventuality? Nice,'” Notley laughed.

Four days before the vote, five business leaders with Tory ties whom Notley nicknamed “The Monopoly Men,” held a news conference in Edmonton to warn against the NDP and generally bemoan the plight of corporations forever getting the short end of the tax stick.

Notley said she remembered watching the Monopoly Men and thinking, this is it? She said she then realized how profoundly the Tories had misread the electorate.

On election night, Notley, her family, and her advisers were in an Edmonton hotel room while supporters, clad in orange, assembled in the party room below.

Notley practised going through the last few paragraphs of her victory speech, recognizing the contributions of her now-departed parents. Her father Grant Notley was a one-man Alberta NDP team in the 1970s, keeping the movement alive only to die in a plane crash before the party broke through with 16 seats and official opposition status in 1986.

“We decided to move (the parents’ tribute) to the very end, so if I did choke up, (the speech) was over,” she said.

Her new security team had called ahead and when she opened the hotel room door there they were, two sentries in suits and ties, symbols of the new life awaiting just across the threshold.

Rachel Notley stepped through and they all headed down to the victory party below.