A word of caution for Justin Trudeau at the UN

Once we break it, we've bought it, argues Evan Solomon 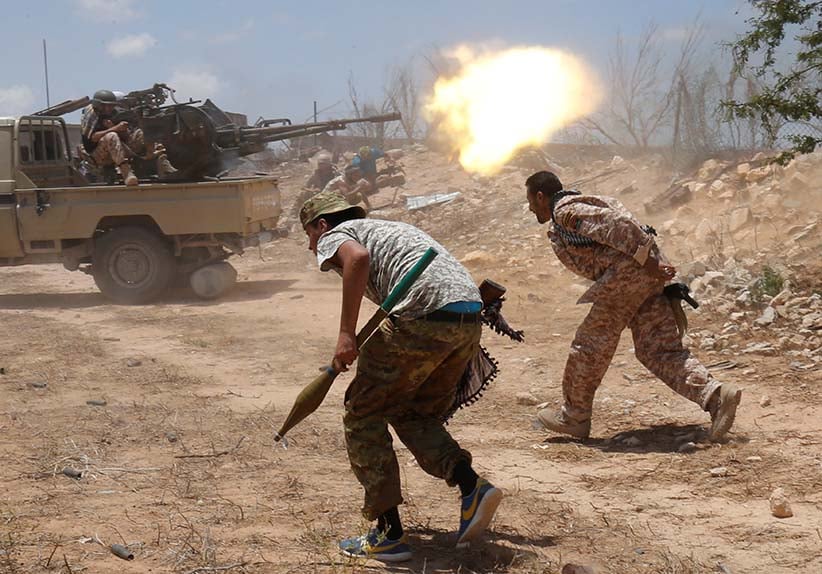 Libyan forces allied with the U.N.-backed government fire weapons during a battle with IS fighters in Sirte, Libya, July 21, 2016. (Goran Tomasevic/Reuters)

It wasn’t on the same asinine level of George W. Bush’s “Mission Accomplished” photo op, the infamous premature victory shot that came to define Bush’s Middle East mess, but when Canada’s then-foreign affairs minister John Baird blazed into Benghazi, Libya, in 2011 and signed a bomb with “Free Libya, Democracy,” it came awfully close. NATO forces had been told not to sign ordinances because it was viewed as arrogant and crass. “Politicians should sign peace treaties, not bombs,” one senior NATO officer on the mission told me recently. Baird didn’t care. This was his first war as foreign affairs minister and he was literally going to put his signature on it. A Canadian general, Charlie Bouchard, led the NATO mission. Canada was at the sharp end and Baird was all in. “The one thing we can say categorically is that they [the rebels] wouldn’t be any worse than Col. Gadhafi,” Baird declared, as if the number of dead civilians was a legitimate way to judge the success of a new government, just as long as it wasn’t “worse than Gadhafi.” Even by that chilling standard, Baird was epically wrong.

It got worse. The gory civil war that followed the NATO mission fertilized the country with an infestation of jihadists, including ISIS. The U.S. and the U.K. are back at it, running hundreds of bombing sorties to contain them. This week the severely crippled UN-backed Libyan government in Tripoli lost control of virtually all key oil terminals to the forces of Gen. Khalifa Haftar. Oil production is down to 200,000 barrels a day, from 1.6 million before 2011. The UN head of the support mission in Libya, Martin Kobler, did what the UN usually does when it is powerless. He expressed “grave concern over the fighting.” In five years, NATO bombs have transformed into UN blanks. To use a non-technical phrase, Libya is now a yard sale of horrors.

Related: Canada steps up with a new NATO commitment

I bring all this up because the lessons of Libya are relevant as Prime Minister Justin Trudeau goes to the United Nations this week, where he may announce long-awaited details of Canada’s new UN peacekeeping operation. Up to now it’s been a mystery mission and there’s concern that any new operation will fall into the same traps NATO fell into in Libya. Canada has promised 600 troops and 150 police officers to some UN mission, likely in Africa, but no one knows where or when they will go. I asked the Global Affairs department for details and they responded like students working on a class project. “The Government of Canada is doing its homework to see how and where Canada can responsibly contribute to ongoing peace and security in the world.” The defence minister, a former solider, candidly admits the mission will likely require the use of deadly force. In UN parlance, that’s called a Chapter 7 mission, but any Canadian who remembers Rwanda or Bosnia knows what that means in plain talk: a dangerous combat mission.

You could fill one of Canada’s giant Globemaster airlift planes with speculation as to where Canada will send its troops. Mali, a desperately unstable place where offshoots of al-Qaeda are based, is frequently mentioned; 68 peacekeepers have been killed there since 2013. According to one source, this would be too dangerous. Another real possibility is Central African Republic, which has been plagued by a three-year civil war. The UN mission there is treacherous and seemingly without end, but there is room to reinforce the existing team. It’s not hard to find conflicts in Africa that need help. On a purely humanitarian basis, it’s a noble impulse. That doesn’t mean it’s strategic, winnable, or even practical. Sectarian violence, greed for resources and ethnic war don’t function according to neat grids and clean lines. That can’t paralyze Canada from acting, but it can’t be dismissed either. In the business of combat there is an old saying: “easy in, hard out”—it’s always simple to justify sending troops into a situation, but almost impossible to have them leave. It’s better known as the “Pottery Barn rule,” a phrase connected to former U.S. general Colin Powell. Once you break it, you bought it.“You are going to be the proud owner of 25 million people,” Powell told Bush before the invasion of Iraq. “You will own all their hopes, aspirations, and problems. You’ll own it all.”

In Libya, NATO forces broke it, but didn’t buy it. They bolted. “NATO did what the mission asked us to do,” says Charlie Bouchard, now retired. “When it came to pass the puck back to the UN, there was no one to pass the puck to.” He’s right. “Canada, alongside its partners, failed to properly plan for the day after the 2011 intervention in Libya,” says Alex Wilner, at Carleton University’s Norman Paterson School of International Affairs. “While some of our allies—the U.S., Britain, Italy and France, chief among them—have seen fit to militarily re-engage in hope of primarily beating back ISIS, Canada has played a different hand, focusing on political stability and global security.”

Earlier this month, Stéphane Dion announced the last of Libya’s chemical weapons have been removed from the country, to be destroyed. Canada contributed $22 million to the Organisation for the Prohibition of Chemical Weapons to achieve that goal over the last four years. Is that enough, given the role we played in destabilizing Libya? Hardly. Still, there is little chance Canada’s new UN mission will include boots on the ground in Libya.

Back in August of 2011 I interviewed John Baird and he assured me then that the conflict was “quickly coming to an end.” He looked so certain, but clearly he had no idea what he was talking about. Soldiers don’t lose wars. Politicians do. You never see them bleed, though—they go on to take jobs at law firms and banks—but years later the stains spread. This next mission in Africa will follow the failures in Libya, Rwanda and Somalia. Whatever we break, this time, we will have to buy.