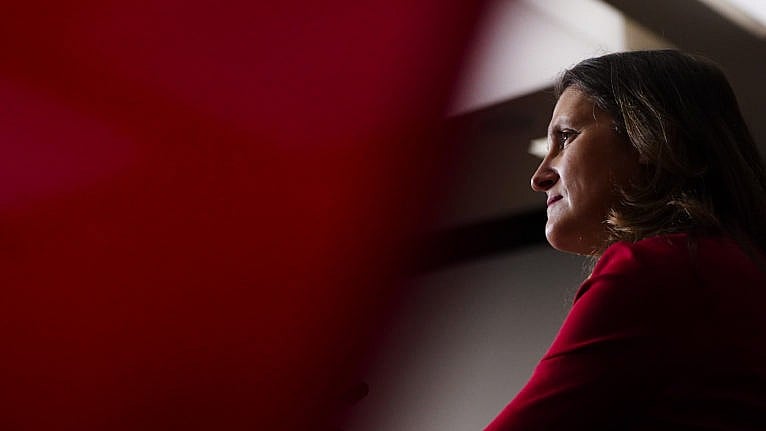 The Globe has an eye-opening story about Chrystia Freeland’s youth, how she flummoxed the KGB while she was a student in Ukraine in the 1980s. Drawing on documents from the Soviet archives, Simon Miles shows that Soviet spies were impressed by Freeland — codename Frida — even as they tried to prevent her from linking Ukrainian activists with foreign journalists.

Ms. Freeland, and her ilk, were a threat to the Soviet Union – but one which had to be handled delicately: treating her too harshly could give credence to the “libellous” stories told in Ukrainian émigré communities about how the KGB treated national minorities in the Soviet Union. According to the KGB, Ms. Freeland was more than just an agitator for, as Col. Stroi derisively put it, “the liberation of Ukraine” who coerced Soviet citizens into staging marches and rallies to attract Western support. She delivered cash, video- and audio-recording equipment, and even a personal computer to her contacts in Ukraine. All of this took place under the watchful eye of the KGB, which surveilled Ms. Freeland. Its officers tailed her wherever she went, tapped her phone calls to Ukrainians abroad, bugged her accommodation, read her mail, and had an informer, codenamed Slav, insert himself into Ms. Freeland’s circle and gain the young Canadian’s trust.

New faces needed: Speaking of Freeland, Trudeau said after the election that she will continue as deputy PM and finance minister in his next cabinet, which seems, to the Globe’s Campbell Clark, a “signal that the rest of the team doesn’t matter as much.” Clark thinks some changes are in order.

First and foremost, he needs a defence minister who actually thinks they are responsible for the conduct of the military, unlike Mr. Sajjan, who repeatedly sloughed off responsibility for the military’s repeated mishandling of sexual harassment. Ms. Freeland said last week that the brass still don’t get it, so Mr. Trudeau needs an experienced minister, preferably a woman, who will make them get it. Perhaps Ms. Anand. He also needs a pandemic health minister who can be the clear spokesperson and forceful negotiator with provinces that Ms. Hajdu hasn’t been.

Going negative: The Star’s Althia Raj has a revealing long read with insight into some of the behind-the-scenes calculations that took place during the recent election. For instance, in late August, rattled Liberals decided they had to go negative because they were on track to lose to Erin O’Toole.

Dan Arnold, the Liberals’ director of research, was concerned by the way support for O’Toole was trending. “If you looked at his momentum and (Trudeau’s) momentum … it certainly was not looking like it was heading into a good outcome,” he told the Star. “I was pretty candid to people … that the way the trajectory was going, we were going to lose the campaign.” Arnold started the meeting with that overview. But he wasn’t the only voice to raise concerns. The campaign team was getting missives — some solicited advice, others panicked and unsolicited — urging it to go negative to change the tide.

Tofino fallout: Trudeau’s decision to travel to makes him look “disconnected” and “tone deaf,” political analysts tell the Hill Times, but most of them think he will outlast this controversy like others before it because of his durable brand, reports Abbas Ranna in the Hill Times.

Needs advice: Speaking of Tofino, in the Hill Times Rose LeMay has a thoughtful column suggesting that the prime minister should get advice from an Indigenous Elders’ Circle.

Enough Huawei: More than 75 per cent of Canadians think Ottawa should ban Huawei Technologies from this country’s 5G telecommunications, the Globe reports.

Somewhat tougher: The Trudeau government appears to be subtly changing its tone on China, Mike Blanchfield writes for the Canadian Press.

Analysts saw hints of a potentially tougher approach in what appeared to be a throwaway line in a congratulatory note that Prime Minister Justin Trudeau sent to his new Japanese counterpart, Fumio Kishida, this past week. Trudeau twice used the label “Indo-Pacific” to stress the importance of co-operating with Japan on shared regional interests. For some observers, that was a signal that Canada was moving toward a tougher posture toward future relations with China.

Blanchfield is the co-author of a new book about the ordeal of the two Michaels.
Legault dominates: In Maclean’s, Philippe J. Fournier has a look at a new Leger poll that finds François Legault with “47 per cent of voting intentions in Quebec, a monstrous 27-point lead over its closest rival, the Quebec Liberal Party.” Legault is so popular that even supporters of other parties want him to be premier.

Bad news for the Liberal Party: when asked which party leader would make the best premier, only 45 per cent of Liberal voters pick QLP leader Dominique Anglade. Even worse news for PQ leader Paul St-Pierre-Plamondon: only 25 per cent of PQ voters believe that he is the best candidate for premier. In fact, PQ voters even prefer François Legault (38 per cent) to the current PQ leader (25 per cent). I am scouring my memory and cannot recall a recent occasion when voters of a major party in Quebec preferred the leader of another party to their own. In fact, Paul St-Pierre-Plamondon (3 per cent) is even behind neophyte Éric Duhaime (6 per cent) in this survey.

Pondering Legault: In the Star, Chantal Hebert takes the measure of Legault’s dominance and points out that many Quebecers are starting to wonder what he plans to do with all his political capital.

It is not uncommon these days to hear speculation that the only person who could lead Quebec back to the independence battlefield would be Legault himself. There are those who fear or hope that engineering such a return is the grand scheme behind his fighting words directed at Trudeau and his ruling federal party. No one can claim to read the premier’s mind.

We’re Number 1! A new report by a Finnish telecom analyst shows that Canadians pay more for cellphone service than anyone else on the planet, the Post reports.