Aaron Wherry on the week ahead 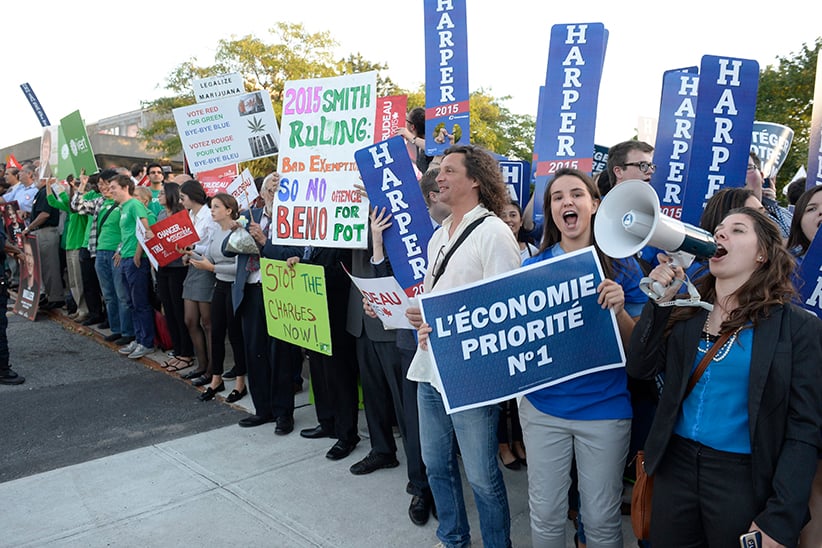 Supporters of the Conservative Party assemble outside the French-language leaders’ debate in Montreal on Thursday, September 24, 2015. THE (Ryan Remiorz/CP)

How will the party leaders handle the world?

Monday night brings the last English-language debate of the campaign, this one hosted by the Munk School of Global Affairs in Toronto and focused on international issues.The subject matter might not be the sort of stuff that would normally be thought to swing an election result, but a debate always holds the possibility of something significant or disastrous occurring. In this case, it might be most important for Justin Trudeau. The Liberal leader has struggled with the question of whether to commit the Canadian military to fighting Islamic State—his comment about the Harper government’s desire to “whip out” our CF-18s was not his finest moment—and a debate about serious matters of war, diplomacy and the globe will likely be considered another test of Trudeau’s seriousness, that which has generally been the central question of his candidacy.

Is it possible we weren’t in a recession?

On Wednesday, Statistics Canada will release new GDP data for the year. It’s entirely possible that the agency will revise its earlier data. That could, conceivably, include adjusting the numbers that previously showed a contraction in the national economy over the first two quarters of the year. Two consecutive quarters of so-called “negative growth” meet the definition of a recession and the New Democrats and Liberals were quick to assail the government when StatsCan showed as much earlier this month. But what if it turns out we weren’t in a recession after all? Tom Mulcair and Justin Trudeau probably won’t congratulate Stephen Harper on such news, but the Conservative case might be slightly bolstered for Canada having officially avoided another recession.

How many more candidate scandals?

Every other day (or maybe it just seems that frequent) has brought some new report of some unfortunate thing some party’s candidate has said or done in the past. One might presume that these discoveries would eventually be exhausted, that whatever could be dug up would eventually all be revealed. But that would presume that party campaigns aren’t holding back some dirt to be thrown at the most inconvenient moment. In that regard, it might be useful to note that all nominations become official on Sept. 28. After that point, a candidate can’t be replaced on the ballot, meaning a party can’t simply dump anyone who has been tied to some embarrassing tweet or Facebook photo.