After a major cabinet shuffle, Justin Trudeau's Liberal government has a new look

Politics Insider for Oct. 27, 2021: Major changes and new faces in cabinet; an unimpressed Erin O'Toole; and a worried Alberta 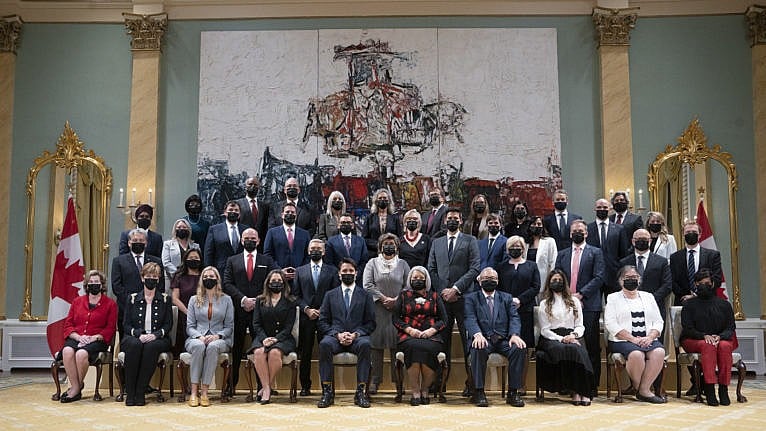 Justin Trudeau’s post-election shuffle looks like a big deal, with Chrystia Freeland remaining, as expected, in place, but other key players getting new gigs. The Globe leads with the big moves.

Prime Minister Justin Trudeau unveiled a major cabinet shuffle Tuesday that appoints Mélanie Joly as the new Foreign Affairs Minister, puts Anita Anand in charge of the problem-plagued Defence portfolio, makes environmental activist Steven Guilbeault the Minister of Environment and Climate Change and moves Patty Hajdu from Health to Indigenous Services. Three former ministers did not land a seat in this cabinet: Marc Garneau, who had held the Foreign Affairs portfolio; Bardish Chagger, who was the minister of Diversity, Inclusion and Youth; and Jim Carr, the former special representative for the Prairies.

CBC leads with Anand, pointing out she is only the second woman to run DND.

She inherits a tough job as the Canadian Armed Forces continues to battle a sexual misconduct crisis. Multiple high-ranking military officers have been moved out of their jobs while facing allegations. Anand said the fact she’s a woman was part of the “calculation.”

“But there are other areas of expertise I will also be imparting to my role, including my expertise in governance and my knowledge of law and process,” she told reporters Tuesday afternoon. “I will say that my top priority is to make sure that everyone in the armed forces feels safe and protected and they have the supports that they need, when they need them, and the structures in place to ensure that justice is served.”

Not so sunny: Here’s how it looked, in our image of the day.

Serious people: In Maclean’s Shannon Proudfoot likes what she sees — an impressive group with big jobs to tackle, which could augur well, if they are given the space to do those jobs.

He has built what looks like a grown-up cabinet, with smart and substantial people plugged into big and difficult roles—Anand, Guilbeault and Duclos being the most vivid examples, with the most relevant files for the moment—for which their skills and strengths are well-suited. The best legacy move at this point might be the one most difficult to execute because of how it contradicts all the demonstrable tendencies of this government to have everything orbit the political centre like a solar system: just give these smart people you picked the space to do their jobs. Having government ministers who can think and do, and talk (more or less) freely about that thinking and doing is good for everyone.

Hurtin: Alberta got a minister — Randy Boissonnnault — but if you think that means Alberta will be happy, you should read Jason Markusoff’s piece, anticipating the strained dynamic now that Guilbault is in Environment.

Alberta tends to get tetchier over rhetoric than it does over actual policy—witness the long memories of a 2017 town-hall remark by Trudeau that he’d “phase out” the oil sands—and this is where Guilbeault’s appointment may remain as incendiary as it seemed Tuesday. Environment and Climate Change can require a diplomat’s deft touch with affected industry leaders, and there’s little to inspire confidence on this front, both because of Guilbeault’s “tar sands campaign” history and his struggles to communicate whatever it was Bill C-10 would actually change. Expect Wilkinson and Trudeau to have to do a fair bit of mop-up, and for Kenney to be summoned regularly to thunder with great, great umbrage.

Post-pandemical: Marie-Danielle Smith gives us five key takeaways from the shuffle, including the good news that the government seems ready to move past the pandemic.

Some speculated that a 2021 cabinet would feature a new ministry in charge of public health. Not so. Instead we have new portfolios focused on other crises. This is a government that is ready to move on. That’s despite the strangeness of a cabinet swearing-in ceremony where everyone is masked at all times, where oaths are slightly muffled, where smiles are obscured and elbow-bumps (in some cases, forearm caresses) have replaced handshakes. The shadow still hangs over.

Smith also has some light-hearted suggestions for portfolios the government could add.

Wise words: And here’s a timeless read (from Maclean’s in 2019): Jane Philpott’s advice to new cab mins: Get ready to read, a lot. And prepare to embrace a huge responsibility. “Every minister receives a mandate letter, but you breathe life into that document.”

Ontario MP Patty Hajdu was appointed as Minister of Indigenous Services, which is responsible for the delivery of services to communities. Quebec MP Marc Miller, who previously had Ms. Hajdu’s job, will now take over Crown-Indigenous Relations from veteran Liberal Carolyn Bennett.

Turnover: Global notes that Joly will be Canada’s fifth top diplomat in six years, which is perhaps a sign this government isn’t focused on foreign affairs.

Trudeau said after his meteoric 2015 majority win that when it came to global affairs, “Canada is back.” Since then, it’s been back-to-back ministers responsible for Canada’s role on the world stage. “There is an issue with the remarkable turnover in the role, and it’s an issue because it’s a position … that has a steep learning curve,” said Roland Paris, a University of Ottawa professor who previously advised the Trudeau government on foreign affairs.

Unhappy about Guilbeault: Two National Post columnists are concerned with the appointment of Guilbeault, who in 2011 scaled the CN Tower to protest climate change. Jesse Kline writes that he hasn’t changed in the years since.

But don’t think for a second that this means Guilbeault has matured since he pulled his illegal CN Tower stunt two decades ago at the (relatively young?) age of 31.

John Ivison writes that Guilbeault’s appointment is dangerous. The Liberals may have bought a pipeline, but that could be just for show.

Enter into this fray, a lifelong opponent of fossil fuels and pipelines as environment minister. The Liberals have in the past been accused of trying to be all things to everyone – both for the climate and pipelines. No longer. Many people in Alberta believe the Trudeau government is deliberately trying to sink the energy industry and that TMX is a smokescreen. Former finance minister Bill Morneau dismissed that idea as “an absurd proposition”. But Morneau is long-gone, shown the door when his views on massive deficits were deemed “too orthodox.” The idea doesn’t seem so absurd anymore.

“Today’s changes to the cabinet represent just another example of the prime minister continuing to reward ministers who have consistently demonstrated incompetence and a lack of accountability,” O’Toole said. Before today’s swearing-in ceremony, O’Toole called for Harjit Sajjan to be dumped as defence minister over his “track record of failure” on the sexual misconduct file in the Canadian Armed Forces. “Canada’s Conservatives are calling on Justin Trudeau to finally do the right thing, and fire Minister Sajjan from cabinet,” O’Toole said in a Monday statement.

Against equalization: Nearly 62 per cent of Albertans who voted in last week’s municipal elections want Canada to remove the equalization section from the Constitution, CBC reports.

The different political cultures of Alberta’s two largest cities were reflected in the results. In Edmonton 51.9 per cent voted “no” and 48.1 per cent “yes,” while in Calgary,  41.8 voted “no” and 58.2 per cent were in favour.

Green mischief: Global’s Emerald Bensadoun and David Akin have a deep dive on the behind-the-scenes nastiness that brought Green leader Annamie Paul low, including details of a report that seems to back up Paul’s version of events.

The report takes aim at the party’s internal culture, but also names several Greens in senior leadership positions it says perpetuated racism and discrimination from inside the party. The report claims the Green’s interim Executive Director, Dana Taylor, had instructed members to assert that systemic racism does not exist within the party. It also found Taylor over-stepped his mandate on several occasions, muting Paul’s mic during a staff meeting and ignoring concerns raised by staff members — particularly those from “equity-seeking communities.” The report also accused Taylor of a failure “to promptly defend staff who faced abuse from members, or to implement procedures to deal with online abuse of staff, despite repeated requests.”

Lewis takes a stand: New Conservative MP Leslyn Lewis says she won’t back down on defending the rights of those, including MPs, who do not declare their vaccination status, the Globe reports.

In tweets over the past few days, the MP for the Ontario riding of Haldimand-Norfolk and one of the few Black members of Parliament, also says she will not allow the media and power structure to compel her to “sit in the back of the bus” or “lynch me into silence.” Instead, Ms. Lewis said, “I will always tell Canadians the truth & no bully or threats will succeed against us.”

Turkish blunder: Canada’s made a mistake when it joined with nine other countries in calling for the release of a jailed Turkish philanthropist, writes Adnan R. Khan in Maclean’s.

But the rightness of the diplomats’ move does not mean it was strategically advisable, especially at a time when Turkey is already being considered for suspension from the Council of Europe—in part because of the Kavala case—and has been grey-listed by the Financial Action Task Force for not doing enough to counter money laundering and terrorist financing. Those moves will hurt the Turkish economy, which will inevitably make Erdogan’s re-election prospects dimmer than they already are. A symbolic statement from a group of diplomats was never going to have much of an impact.