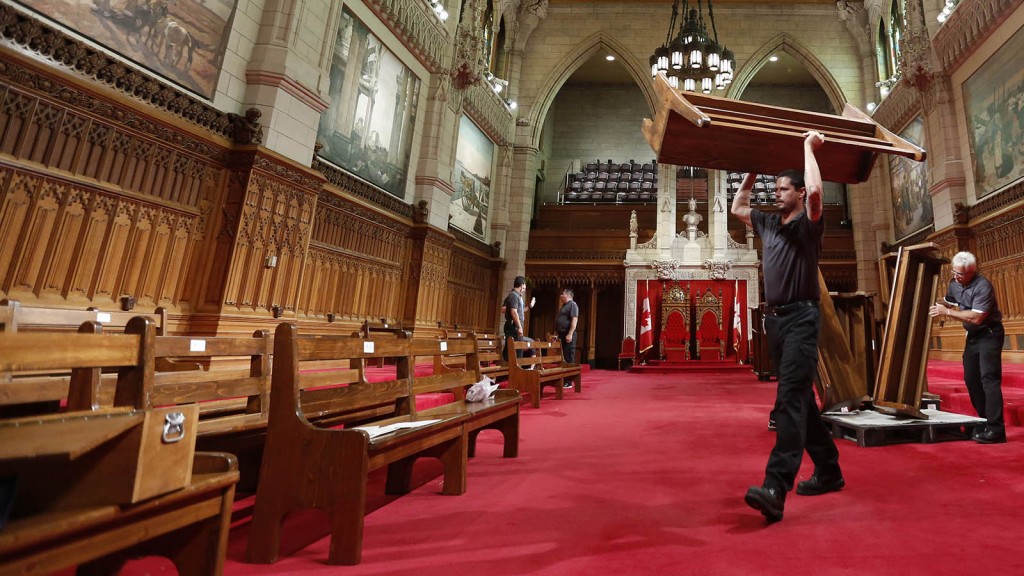 After nine years, 59 appointments to the upper chamber, one ruling of the Supreme Court, one cheque for $90,000 and 31 charges against Mike Duffy, Prime Minister Stephen Harper has now vowed to fold his arms, hold his breath and wait until the premiers are ready and able to present him with an agreement to reform or abolish the Senate.

So either the premiers—taken somehow by a desire to commit energy to addressing the form and function of the federal legislature—will band together to solve this conundrum and relieve this Prime Minister and all future prime ministers of ever having to nominate another unelected appointee, or we will, eventually, have ourselves a constitutional crisis.

Or perhaps, before then, we will have a different prime minister.

The Senate is not merely a quirk of our history or a blight upon our democracy. It is the law. Its existence is part of the constitutional basis for this country’s existence.

As drafted, the foundational text was the British North America Act, “an Act for the Union of Canada, Nova Scotia, and New Brunswick, and the Government thereof; and for Purposes connected therewith,” dated March 29, 1867. It is now known as the Constitution Act, 1867.

At section 17 it is written that, “There shall be One Parliament for Canada, consisting of the Queen, an Upper House styled the Senate, and the House of Commons.”

At section 22 it is decreed that, “The Senate shall, subject to the Provisions of this Act, consist of One Hundred and five Members, who shall be styled Senators.”

Section 23 allots these 105 senators to the provinces: 24 each for Ontario and Quebec, 10 each for Nova Scotia and New Brunswick, six each for British Columbia, Alberta, Saskatchewan, Manitoba and Newfoundland, four for Prince Edward Island, one each for the Northwest and Yukon territories.

Section 32 sets out that, “When a Vacancy happens in the Senate by Resignation, Death, or otherwise, the Governor General shall by Summons to a fit and qualified Person fill the Vacancy.”

And section 35 dictates quorum: “Until the Parliament of Canada otherwise provides, the Presence of at least Fifteen Senators, including the Speaker, shall be necessary to constitute a Meeting of the Senate for the Exercise of its Powers.”

To change or ignore constitutional provisions should be considered no small thing.

At present, the Senate is 22 senators short of its constitutional allotment. And already it could be argued that the Constitution is being betrayed—that provinces are being deprived their rightful representation and that Parliament is not in its proper form. In fact, Harper’s reluctance to nominate anyone for the Senate is already being challenged at the Federal Court.

Even if that particular challenge fails, it will still not be possible to merely ignore the Senate away. Without at least 15 senators, the Senate would be unable to function. And unless passed by the Senate, legislation cannot be made law. Thus, as currently set out, there is no functioning Parliament without a functioning Senate.

As the Supreme Court ruled that any “fundamental” change to the form or mandate of the Senate would require provincial consent, it’s possible that a refusal to appoint senators would be ruled unconstitutional long before the Senate’s population fell below 15. What then? Would Harper ignore a court ruling? Shall we start speculating now about when a governor general would be compelled to intervene? Would it be too early to start manufacturing constitutional-crisis tchotchkes to sell to the tourists?

That the provinces have a role here is indisputable, but to suggest that they would sort it out themselves seems at least to absolve the federal government of its responsibility to join (convene, even) those discussions and to ignore the fact that the Senate is a federal institution.

Though his declaration today was more unequivocal, that the Prime Minister isn’t willing to fill those vacancies is not a new development; it has been more than two years since he recommended anyone to the Governor General. As rival partisans quickly pointed out, going back 11 years, this is not even the first time Harper has vowed not to make Senate appointments.

And so Harper wants nothing to do with the Senate now. Which is, given all of the above, perfectly understandable.

It’s just that this “moratorium” comes rather late. It was seven years before Harper referred the matter of Senate reform to the Supreme Court; even after gaining a majority in the House, the Conservatives sat on their own reform legislation. And now, nine-and-a-half years and 58 more senators after he recommended his first nominee, the Prime Minister has declared a moratorium. (In fairness, three of those nominees had gone through elections in Alberta.)

In addition to speculating about where things go from here, we might wonder how differently history would have unfolded if this moratorium and that reference had been initiated in February 2006.

(Earlier in the day, it had been speculated that the Prime Minister was about to announce his support for abolition, a position that could have at least been presented as his plan all along—the culmination of a decade-long play, brilliant in hindsight, to destroy the upper chamber.)

More currently, we might ask about the precise utility of the 83 senators that remain.

It was the Prime Minister’s estimation today that the 22 senators we don’t have are not missed. “There are 22 vacancies now,” he said. “How many people are noticing?” For that matter, he celebrated the budgetary savings that resulted from not having those senators. Later, he dismissed the notion that provinces gain meaningful representation from their current senators. “The number of senators you have today, in the current institution, gives no real weight in Parliament,” he said. “Decisions are made, for all practical purposes, in the House of Commons.”

It was previously the Prime Minister’s suggestion, mind you, that the Senate was fulfilling its functions, as long as the Senate was passing the government’s legislation.

All things considered, then, the Prime Minister should be looking to save more money. At present, and even if every independent senator votes against the government, the Conservatives have a majority of 11. Even allowing for the Conservatives to maintain a healthy majority still leaves a surplus of senators, and so, surely, at least five or six Conservatives should quit. And perhaps the rest can agree to a sizable pay cut. In the meantime, Harper’s senators might explain what it is they do that we should consider to be of any value.

(Harper’s principle of “How many people are noticing?” might next be applied to reducing his ministry by a third and seeing if the public complains.)

There is at least here some kind of discussion about the upper chamber’s precise utility.

Is democratic legitimacy required to provide sobriety and voice? If so, how would an elected Senate interact with the House of Commons? How more likely would it be that we’d have the sort of gridlock that has paralyzed the U.S. Congress? And why wouldn’t an elected Senate merely behave as unsoberly as our elected House?

As lucrative as it might be to convert the Senate into lofts, would it be all the more dangerous, given the House’s drunken weakness, to abolish the Senate, as the New Democrats propose, and remove one more check on power, even if that check seems more theoretical than real at present?

Or is it possible that the Fathers of Confederation were onto something when they established an appointed chamber of second thought, even if we’ve maybe never had a Senate that lived up to its notional ideal? Could a new appointment process and a break from caucus allegiance, as the Liberals propose, achieve that utility? Or is that even merely just the most practical solution?

(If Trudeau hadn’t proposed it already, would that have been an option for the Prime Minister now? Or would he rather not have dealt with senators who couldn’t be counted on to advance his government’s agenda relatively unimpeded?)

Those questions would form the basis of a decent debate about the Senate. And maybe that debate will be had now—or be had more loudly and decisively than it was already being had.

For the moment, we have a Prime Minister asking the provinces to sort things out amongst themselves while he uses an ultimately unconstitutional moratorium to hide from an upper chamber already stacked with appointees of questionable utility. It is probably enough of a position to get him through the election—or, at least, it is surely a better option than appointing 22 senators this summer. But, nine years after he mused to senators about the “rite of passage for aspiring leaders and prime ministers to promise Senate reform on their way to the top,” only for their governments to lose interest and for the “status quo” to prevail, the Prime Minister is left with something worse than the status quo, as he attempts to redirect responsibility.