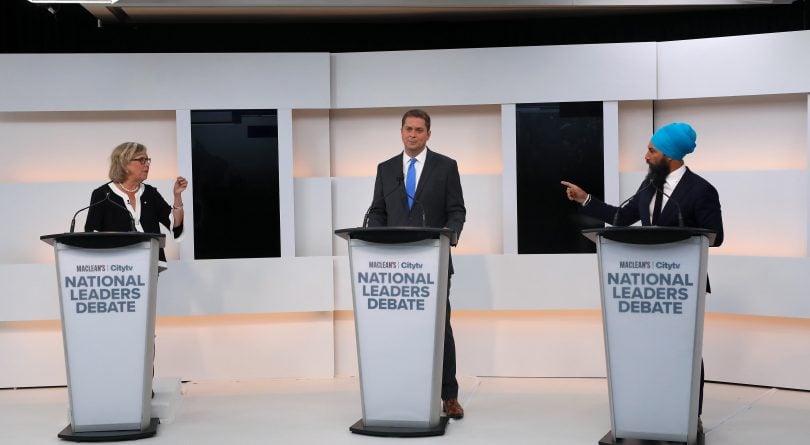 After just one debate, plenty of Canadians appear to be thinking twice about who they’ll vote for in the upcoming federal election.

One out of 10 people said they changed the party for which they planned to vote after the Maclean’s/Citytv National Leaders Debate on Thursday night, according to a Maclean’s Facebook poll.

Though the poll is unscientific, the responses of more than 3,200 people indicate how the debate, which took place less than 48 hours after the federal election campaign officially launched, could shift the momentum for the parties and their leaders—even for those who didn’t partake.

Conservative Leader Andrew Scheer, the NDP’s Jagmeet Singh and Elizabeth May of the Green Party took the stage to answer questions on four major issues: the economy, foreign policy, Indigenous affairs and the environment.

Prime Minister Justin Trudeau was notably absent—an empty podium left on stage indicating that the invitation remained open until the moment the debate began. “Why have a debate without him?” asked moderator Paul Wells. “Because in Canada we elect Parliaments, not presidents. Every party can influence the next four years and every party has a case to make and to defend. And in Canada the right to ask questions is never bestowed by some authority. It belongs to everybody.”

In various Twitter polls posted by Maclean’s and Citytv, about 60 per cent who clicked as of late Friday said that the economy is the most important issue in this election.

What matters most to you in this election?

When it came to the economy and manufacturing jobs, Scheer and Singh sparred over support for steel workers.

Andrew Scheer clashed with Jagmeet Singh on steel jobs in tonight’s National Leaders Debate. Who do you think came out on top? #firstdebate #cdnpoli #elxn43

Regarding Indigenous issues, Singh and May clashed over how to fix the problem of a lack of clean drinking water on First Nations reserves—including May’s unique idea of a seeking a sentence for SNC-Lavalin if the company is convicted on fraud and corruption charges that would force the engineering to help provide drinking water systems to Indigenous communities.

Jagmeet Singh and Elizabeth May argue about a Green proposal to force SNC-Lavalin to clean water on First Nations across Canada #cdnpoli #elxn43 #firstdebate pic.twitter.com/nvEE5vfwGR

Elizabeth May clashed with Jagmeet Singh on SNC-Lavalin in tonight’s National Leaders Debate. Who do you think came out on top? #firstdebate #cdnpoli #elxn43

On foreign policy, there was a heated exchange between Scheer and May over how to manage Canada-China trade relations.

Andrew Scheer clashed with Elizabeth May on China in tonight’s debate. Who do you think came out on top? #firstdebate #cdnpoli #elxn43

Meanwhile, when it comes to tackling climate change, the most popular option presented appeared to be taxing big emitters.

What is the best policy to tackle climate change? (Watch the #firstdebate: https://t.co/Dls4hIVByu)

With one debate down, there are still four more to come—two in French and two in English. However, Trudeau hasn’t confirmed his attendance for the planned Munk Debate on foreign policy.

Considering that two-thirds of respondents to a Citytv Facebook poll said a leader’s debate performance affects how they will vote, Trudeau’s absence for a second straight debate would clearly be a gamble: to the Liberals’ detriment or advantage, it could affect the intentions of the many Canadians second-guessing who should win their vote.