After five debates, some lessons about Justin Trudeau

The Liberal leader's opponents wanted lots of debates to increase the odds of him messing up. That gambit didn't work out so well. 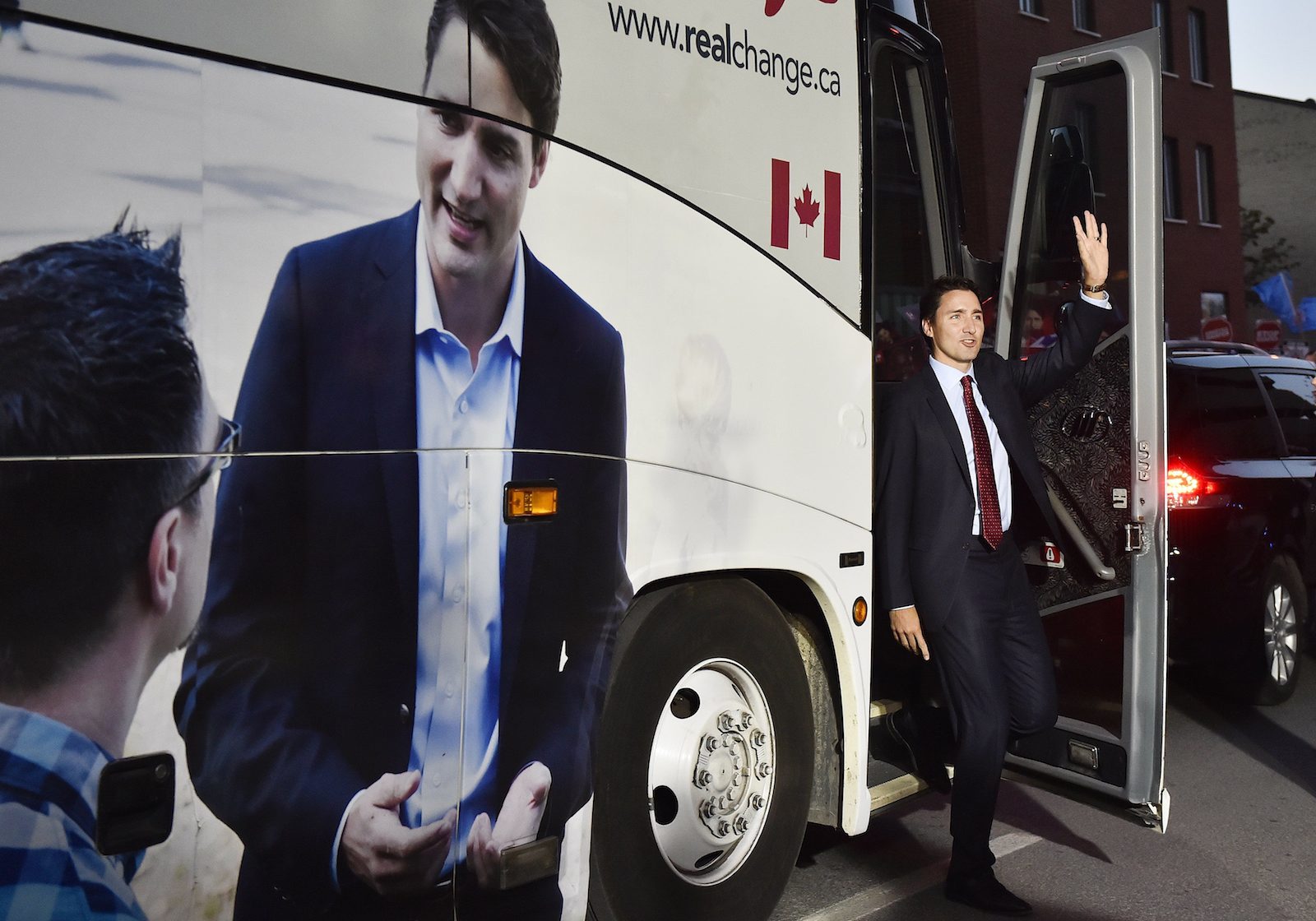 I like Greg Lyle, a Toronto pollster whose Innovative Research Group is not one of the firms Ottawa listens to most attentively, but who finds interesting connections in the data he collects. On Friday he released a new report that showed a rough three-way tie among the big national parties, but that also suggested Canadians have grown so heartily sick of this campaign they are having a hard time taking in new information.

“As the election nears, it appears Canadians are paying less attention to the election, not more,” he wrote. “Roughly four in 10 Canadians heard something about or saw at least some of the Maclean’s and The Globe and Mail debates. That dropped to one in four for the French debate and the Munk debate. In a similar development, all three main parties registered their lowest level of awareness so far in this campaign in response to our ‘read, seen or heard anything about that party’ question. It looks like Canadians are tiring of campaign rhetoric.”

So the first thing to say about Friday’s TVA debate is that one shouldn’t presume it had an attentive audience. And that even to the extent people were paying attention—I listened pretty closely, being as how it’s my job and all—it’s not clear, even then, how much new information they would have received. We’ve heard much of it so many times that we could sing along. Tom Mulcair has a line about how the Liberals were so insincere about the Kyoto Accord that Jean Chrétien’s right-hand man, Eddie Goldenberg, later admitted there was no plan for implementing the thing. It’s not a memorable line. And yet I’ve heard it more often than I’ve heard most Beatles songs.

So the TVA debate, widely advertised as a key moment because the network’s “face to face” confrontations have been ratings hits during the last two Quebec provincial elections, felt more like a reunion tour by a particularly grumpy old-timers’ band. They played all the hits. Even if you were desperate for them to stop. And they weren’t always really happy to be back together. “Mr. Mulcair, you’ve made the wrong choices,” Justin Trudeau told the NDP leader by way of greeting. Mulcair replied: “You want to talk about choices? You supported a string of Conservative budgets (that is, in the minority-government years, when opposing the government meant risking an election) and you supported Bill C-51,” the Conservative anti-terrorism bill. And that was just how they said hello.

Harper accused the Chrétien-Martin Liberals of having “the worst record in history” on carbon emissions, which is pretty close to being accurate. Duceppe mocked the serpentine path Mulcair has trod on the simple question of whether he supports the Energy East pipeline project, popular in the prairie West, less so in Quebec. “Win-win-win,” Duceppe said, quoting Mulcair, as Mulcair tried to talk. “Win-win-win.” Mulcair tried again to get a word in. “Win. Win. Win.” It was juvenile, but you say juvenile like it’s a bad thing.

Mulcair needed to perform very well to arrest an alarming slide in the polls, and he did, especially on the issue that seems to have done him the most damage, the vexing, if almost unbelievably narrow, question of niqab in citizenship ceremonies. Mulcair started with a narrow attack on Harper—denying Harper the right to claim feminist motivation, given the rest of his record on women’s issues—then broadening it into a general question of rights. It was a principled stand on treacherous ground, and I think it honoured Mulcair.

Harper had little trouble rebutting. “you can’t even persuade your own candidates of your position,” he said, which in several instances is true. And: “You talk about divisions. Just about the only division is between Liberals and New Democrats and the rest of the population.”

If the lines were mostly familiar, the general tone and attitude behind them was perhaps all the more important. Mulcair did himself some good, reining in his tendency to patronize listeners, restraining his temper better than in previous encounters. But I think it was Trudeau who cut the most impressive figure. He gave a sense of poise, policy ambition and cocksure readiness to spar with any of the other leaders. Once again I was reminded that one reason there have been so many debates in this odd campaign season was because Trudeau’s opponents wanted to multiply his opportunities to screw up. He’s now put the last debate behind him, and to some extent their gambit has backfired. Marc Garneau, who failed to stop Trudeau during the Liberal leadership race two years ago, could perhaps have warned the other parties about their likelihood of succeeding.

I always remind myself that voters are less interested in voting for a debate winner than they are in selecting a head of government. Maybe Harper’s low-key but effective rebuttals will impress more viewers of Friday’s debate, or maybe the spectre of Gilles Duceppe will remind them that voting for the Bloc Québécois is still an option. And it may well be that Trudeau’s spirited advocacy of policies that are simply unpopular in Quebec, like veiled voting, will not get him far at all. Or even make him a target of voter wrath.

But this election is turning, as it always seemed it might, into a referendum on change vs. more of the same. Change may yet lose, as it has lost ground, a little more each time, in every election Harper has fought as an incumbent. Nothing is guaranteed. But at long last this whole campaign feels like it is heading into the home stretch.