It wasn't quite a revolution. After months of speculation, Alberta’s NDP government outlines its not-so-original economic plan 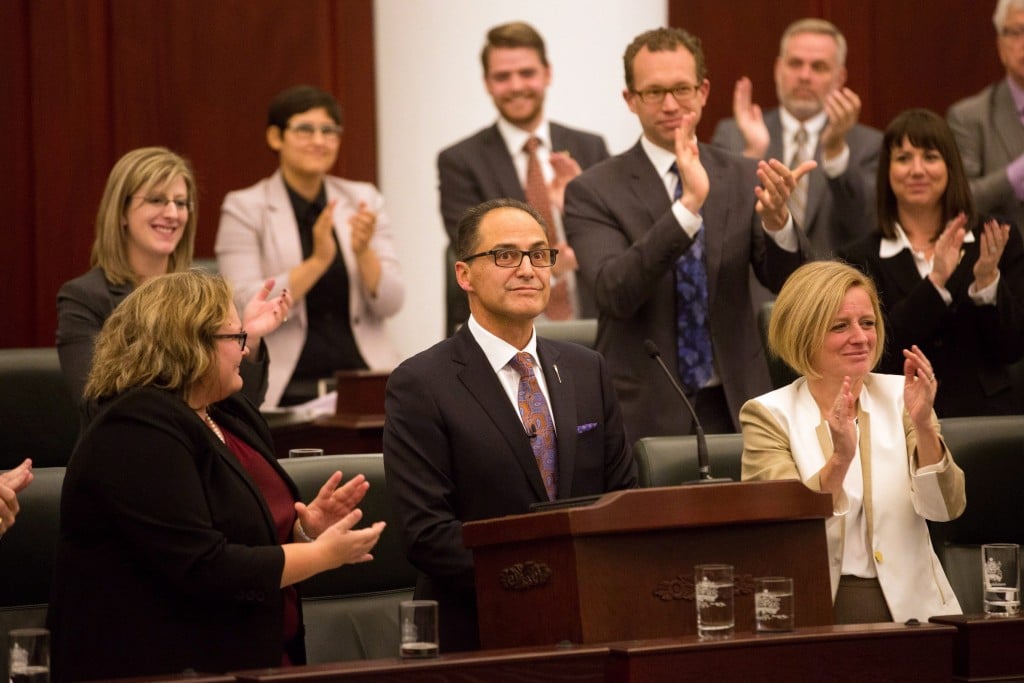 The finance minister, younger and with darker hair than his predecessor from the old regime, rose in the Alberta legislature to proclaim new directions and new priorities—at long last, with a new party enjoying majority rule.

The province needed “economic stimulus” to stoke a flagging labour market, the minister said. The province’s future growth would depend on a more diversified economy, he said, a transition away from overreliance on natural resources. And while much was changing, one thing would not: Alberta would remain the province without a sales tax.

So it was when Gordon Miniely delivered his budget in March 1972, a few months after Peter Lougheed’s Progressive Conservatives swept away nearly four decades of Social Credit rule.

And on Tuesday came NDP Finance Minister Joe Ceci, nearly 44 years later, with a new-era budget of stimulus spending and measures to usher in a healthier, multi-industry economy—the first big test since May’s election of how the NDP can adjust the levers of Canada’s most dynamic economy.

Related: The summer’s over. Is the honeymoon over too, for Alberta’s NDP?

Rachel Notley’s newbie government is trying to accomplish what every Tory premier either attempted earnestly or mused about blithely: to rescue Alberta from the oil sector that brings it joy, then breaks its heart, and may one day leave forever. Other Alberta leaders tried purchasing an airline, backed a meatpacker and pulp mill, but enjoyed their best investment successes in—where else—petroleum extraction. Notley isn’t going there, at least not yet. But her predecessors have given her unusual tools that perhaps only a social democratic government can harness to its true, big-state potential. Ceci and Notley are empowering ATB Financial, the state-owned banking institution the Social Credit hatched, to lend up to $1.5 billion more to “our province’s entrepreneurs and job creators.” AIMCo, the Tory-created wealth manager, will remain a freewheeling investor, except for the new government’s mandate to invest a $540-million slice of the province’s rainy-day Heritage Fund into “growth-oriented companies” in Alberta.

In a Justin Trudeau-like flourish, there’s more infrastructure spending, though a 15 per cent increase only gets the province back to 2009’s pace. And in a nod to its election platform, which the NDP maintains as its guiding light, the 2015 budget contains cash incentives for new private-sector and not-for-profit jobs. The maximum number of new jobs to “support”—up to 27,000—is actually fewer than Alberta’s private sector yielded in its last robust month, October 2014.

This all amounted to relative tinkering, not the revolution some may have expected or dreaded. In between now and next spring’s first full-year NDP budget will come bigger measures: oil royalty changes and an environmental plan that likely includes new carbon pricing.

The provincial forecast beyond 2015 is gloomy: rising unemployment amid slow GDP recovery, an oil price that will only creep up to US$61 per barrel next year, and a once-stout contingency account that will be fully depleted next fiscal year, forcing Alberta to borrow to fund its operations for the first time in more than two decades. Alberta’s deficit this year hits a record $6.1 billion. Balanced books won’t come again for another four years, two years later than the NDP originally predicted (though one of those adjustments was because of a mid-campaign calculation error, the sort of proto-rookie mistake Alberta used to be able to shrug off when it came from this perennially minor party).

The opposition Wildrose wants to constrain spending more swiftly, casting itself in the cloth of deficit-slayer Ralph Klein—a chief villain of NDP mythology. Though an election isn’t until 2019, New Democrats are swinging mightily against the return to Alberta conservatism, warning throughout Ceci’s budget speech against straw-man alternatives that would lay off thousands of nurses and teachers, and decrying “a great deal of nonsense” in criticism of the corporate tax hike announced in the spring throne speech.

The new budget contains only modest tax hikes for liquor and tobacco, after the NDP had scrapped the health levies and most user fees from the Tories’ electorally toxic March budget. But the NDP declares it will have the chutzpah to do what successive centre-right premiers never could: tighten the growth in health spending to only two per cent by 2018, instead of the typical six. The budget also includes $450 million of “re-allocations” from that vague realm called “lower priority programs”—the type of future cuts the former NDP opposition and its union allies would have screamed about from rooftops.

But this is a new regime, of course. It’s time for new direction, new priorities and a new plan to make Alberta even greater.