The New Democrats need to make Albertans fall in love with them all over again. Notley's tentative new budget seems unlikely to re-light the flame. 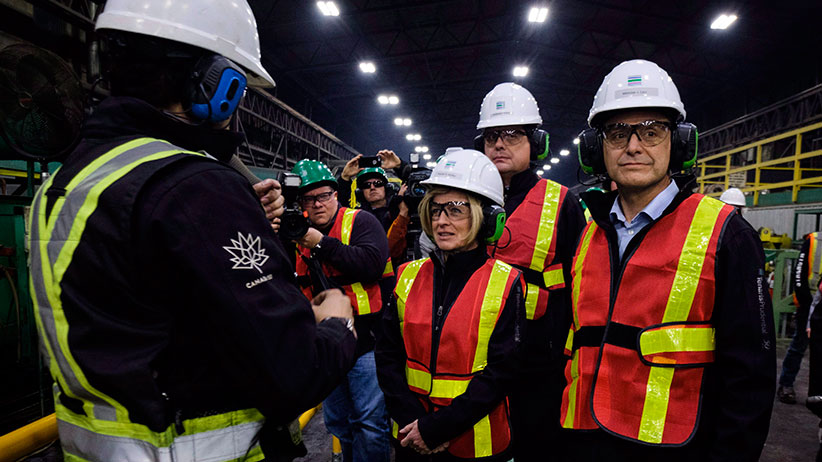 A few months ago, when Alberta Finance Minister Joe Ceci revised the 2017-2018 provincial deficit down to $9.1 billion from a previously forecast $10.5 billion, he declared it one of his best days on the job. The economic recovery was well under way, Premier Rachel Notley’s treasurer said with his gap-toothed grin—and soon, he added, Alberta would come out with a budget that showed the NDP government’s restraint and point the way back to the balanced budgets that soaring oil prices used to make so easy.

Lo, Alberta’s budget showed that Ceci and Notley managed to shrink a $9.1-billion deficit all the way down a mere $8.8 billion this fiscal year. It would be erased in 2023-2024, under their forecasts, by which point the accumulated debt reaches $96 billion—just below the level at which Austin Powers’s nemesis Dr. Evil would touch his evil pinky to his mouth.

Alberta’s 2018 budget is titled “A recovery built to last;” a catchier subtitle could have been “In the shadow of the enemy.” Former federal minister Jason Kenney is newly installed in the legislature as United Conservative opposition leader, and should he win, as widely expected, he says he would set the province on a more aggressive fiscal reordering, eliminating deficits one year more quickly. Ceci’s budget speech makes repeated references to past Tory governments’ boom-bust budgeting, while previewing 2019’s major election theme that a more conservative regime will bring sinister slashing. “Had another government been in place, they would have drastically and extremely slashed the necessary supports Albertans need in health care and education and social services, and we would have all been a lot worse off,” Ceci told reporters Thursday.

RELATED: Alberta needs to be honest with itself about the budget

His NDP budget keeps a lid on spending in some areas, stretches out infrastructure plans an extra year or two, yet keeps the scalpel off any programs in a way that would have helped wrestle down the deficit further than the $300 million Ceci’s budget proposes. It signals that the NDP may be easing itself back to its familiar role in opposition, where it depicts any trims or cancelled programs as cold-blooded murder of the public trust. Leaving initiatives like the Major Fairs Program (a $15-million yearly subsidy for the Calgary Stampede and Edmonton’s summer K-Days) wholly intact leaves plenty for Kenney to slice if he wins next year.

The NDP won’t satisfy fiscal hawks, or those accustomed to Alberta’s deficit-averse culture with this budget. And there’s no marquee program or spending increase to delight a particular segment of the electorate. But at the very least Ceci and Notley hope the credit agencies might skip the annual whacking they’ve given the province in recent years; they may fall short in that regard, too.

Credit raters, well aware that Alberta’s energy-royalty days are on indefinite hold, have urged balance through spending cuts or revenue hikes, noting the province’s high per-capita expenses and low tax burden make a dangerous combination, yet offer ample room to act. The 2018 budget largely evades both options in a chapter entitled Path to Balance: it’s 15 pages thick with handy-dandy charts, economic assumptions of modest growth, and holds out the expectation that the Trans Mountain pipeline expansion will go ahead and bring further prosperity to Alberta. The budget documents don’t mention what happens if the B.C. government and activist forces besieging the pipeline project succeed—though there seems to be some hints laid on Budget Annex C, Page 382, which is nothing but fire and poop emojis. (I kid, I kid.)

Alberta has also laid further waste to its previous claims its carbon tax will be revenue neutral, or even that the proceeds will all be recycled into climate-friendly programs. When the federal government mandates the levy rises to $40 per tonne in 2021 (up from $30 in Alberta currently), the NDP would stuff the extra funds into general revenue. That will mean around $1 billion per year from Albertans’ higher fuel and heating bills going toward schools, health and debt servicing/deficit limiting. While it backtracks on a key tenet of Alberta’s much-maligned carbon tax, a province stubbornly opposed to bringing in a sales tax eventually has to diversify its revenue mix, one way or another.

Like their Ottawa counterparts in the latest federal budget, Ceci and Notley have issued a plan that’s big on nice themes—there’s even a short section on gender-based initiatives—but is lacking in bold, centrepiece spending programs. The Wynne government in Ontario, hanging on by a wing and a prayer (that Doug Ford faceplants), at least fought impending political doom by offering voters greatly expanded prescription drug coverage, dental care, home care and child care in this week’s Throne Speech, as a prelude to next week’s budget. But Kathleen Wynne’s spending binge next week will press the deficit back up to $8 billion dollars from the previous balanced budget—Notley, governing a province three times less populous, has had to (gently) scrape its way to an $8.8-billion shortfall.

RELATED: GST on carbon taxes in Alberta, B.C. worth millions in federal revenue

Before next spring’s election, the Alberta New Democrats will likely have time for one last budget. But with this year’s plan, they’ve set themselves on such a modest, middling, excite-nobody path that it would look ungainly and erratic (mind you, consistency was no concern of the Ontario Liberals, who last year forecast a healthy string of surpluses). Notley has set herself on a path of blandness, aspiring to be seen merely as competent and reasonable, in a province that has been skeptical of the NDP’s abilities on either score.

But with polls showing Kenney’s United Conservatives on the path toward landslide victory in 2019, the NDP needs some massive changes in the next 12 months to make Albertans fall in love with them all over again. This budget can’t change much.