Across Alberta, frayed town councils are cracking down and giving the Rob-Ford treatment to cantankerous mayors 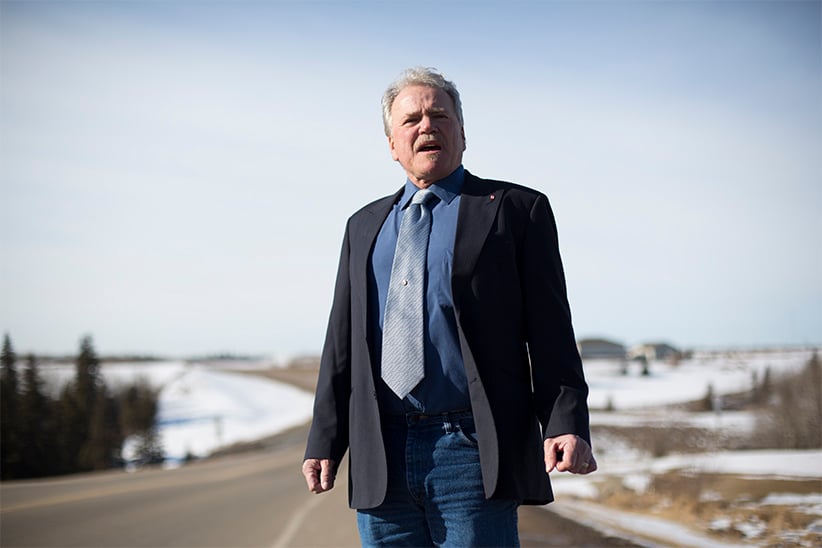 Anti-bullying day fell on council-meeting day in Gibbons, Alta., and Mayor Doug Horner was happy to join in. He wore a bright-pink T-shirt over jeans and brown cowboy boots. All the councillors and municipal staff came in pink ties emblazoned with the Alberta town’s logo. Horner stood at the far edge of the group photo, the one of these things that’s not like the others. “Well, I mean, it’s Pink Shirt Day,” Horner explains later, with a smirk. Colleagues gave him a pink tie, but he complained it had wrinkles and a coffee stain.

Though voters of the town of 3,000 elected Horner in October 2013 to bang the gavel as council chair, sign bylaws and act as chief spokesman, he’s done none of that since July 2014. The six councillors voted unanimously then to strip him of those mayoral powers for six months—then cut his pay and took back his cellphone. They’ve kept renewing the sanctions ever since. Deputy Mayor Louise Bauder now runs the show; Horner retains the ceremonial title and little else.

It’s like what Toronto city council did to Rob Ford, though Horner never smoked crack. Rather, Gibbons council punished him for the kinds of things Ford was less internationally notorious for: there were claims of bullying and berating staff and colleagues, hot-tempered antics and doing end runs around council to pursue his agenda. (Plus, in Horner’s case, allegations of a tussle at a local pub.)

Cantankerousness is a chronic malady in politics at various levels, but some Alberta town councils have opted to crack down on it. Mayors have also been Rob-Forded in Fort Macleod, where the diminished chief magistrate sued the town and lost; and most recently in Manning, where Mayor Sunni-Jeanne Walker’s alleged transgressions were never made public. Municipal leaders say frayed councils are considering similar actions in more than a dozen other communities unless the Alberta government enacts new rules to head off or limit such powers to disempower. Even popular mayors like Calgary’s Naheed Nenshi and Edmonton’s Don Iveson should be wary, Walker says. “You’d better watch out, buddy boys. Your council can go after you.”

To seek glimpses of why council wanted to “go after” Horner, Maclean’s visited the bi-weekly council meeting in the first town on the long drive north from Edmonton to Fort McMurray. Horner sits at the end of council’s table and blurts out questions or comments. Others raise their hand and wait Bauder’s call. At one point, he brings up a colleague’s past comment regarding something glib-seeming Horner had said on Facebook, about buying land in another Alberta county. “What have you invested in your community in the 30 years you’ve been here?” the mayor asks, gruff yet soft-spoken. “I don’t think that’s any concern of yours,” Councillor Jean Woodger replies curtly. He challenges again. Woodger pauses, looks down. “I don’t think it’s worth the effort,” she says.

A spectator, asked if Horner is hamming it up because media’s watching, replies: “Actually, this is kind of low-key.”

Councillors agree. They say the troubles and hotheadedness began shortly after Horner’s election as first-time mayor. They privately discussed the mayor’s conduct with him for months before applying sanctions. As in Toronto and Ontario, council can’t legally remove a mayor unless there’s a criminal offence, but Alberta law lets a council majority rein in some leadership roles.

When they’re at conferences and council goes out for dinner together, he won’t join, Bauder says. “We don’t all need to be friends. We need to work together.” Darren McCann, another councillor, says Horner lacks necessary leadership skills in the Canadian “weak mayor” system. “People are really confused about what a mayor is because we watch American TV, where the mayor is the boss,” McCann says. “The mayor really has no more power than the average councillor, anyway.”

Gibbons sought mediation early on to defuse the conflict. A mediators’ report said the retired businessman’s approach was the “trigger” for wide-ranging tensions: “The mayor’s leadership style has been described as being dictatorial, abrasive and confrontational.” With this indictment in hand, council decided Horner could have mayoral powers again if he apologized extensively, signed a code of conduct, got remedial training and—given a past stroke he had—underwent assessments for mental and physical health, plus hearing.

The mayor dismisses it all. “Apologize for what? I didn’t call them lazy or anything,” Horner tells Maclean’s. (Minutes earlier, he said, obliquely: “If I’m guilty of one thing, it’s that sometimes I call lazy people lazy.”) He says much of council’s claims of his misbehaviour are hearsay, and produces documents and letters aimed at clearing him of accusations of rogue talks with businesses and other organizations. The alleged fight with a local at Jingler’s Pub made headlines when his sanctions were announced in Ford’s wake—though councillors say that wasn’t the key offence—and he has variously called that a “non-event,” merely a scuffle, and, in an interview: “I just grabbed him. I thought he was going to hit me. We remain friends.”

Horner insists council cannot prove his misdeeds. In reality, a council never needs proof and clear evidence of something before making political decisions, be they property taxes or road projects or council procedure. Just as there is no threshold for obstinacy fellow politicians shall tolerate. 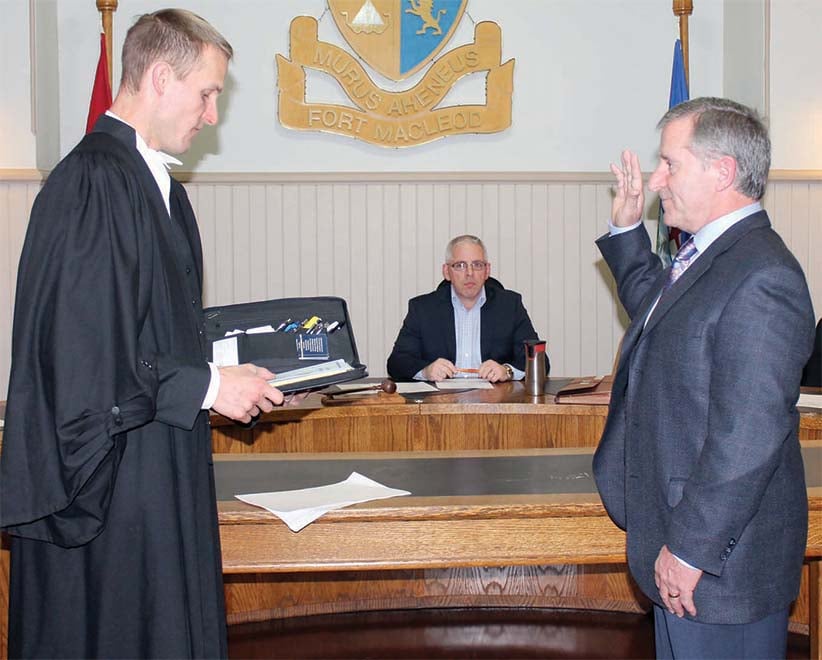 Last October, a judge ruled council’s punishment wasn’t unreasonable, given the efforts to forge co-operation with Gendre. “Notably absent from the mayor’s submission to the court was any recognition of his role in the conflict, the acceptance of any responsibility or any proposed solution to the conflict,” the judge wrote. Gendre was ordered to pay more than $125,000 in town legal fees but will wind up paying far less, says Deputy Mayor Brent Feyter, the new gavel-holder.

It would have been an intolerable four-year term of run-on meetings and hectoring with Gendre at the helm, Feyter says. Legal research into Alberta’s Municipal Government Act inspired the sanctions, not Toronto’s move on Ford. “It didn’t specify that the mayor had to be mayor. It says ‘unless council decides otherwise,’ and council decided otherwise,” Feyter says.

“I’ve worked for seven companies and cleaned them up,” Gendre says in his defence. “So I’ve gone through this before and it’s always the unspoken bullies who try to rule.” Locals petitioned for a municipal review, due back within weeks—this leaves matters in the hands of the province, which does have the power to force resignations.

In Manning, a frontier town six hours northwest of Edmonton, council has used confidentiality rules to shield its rationale for punishing Walker, who unlike the rookie mayors in Fort Macleod and Gibbons was sanctioned in her third term. Manning council cited “extreme conflict” with the 69-year-old mayor in its September announcement by a news release, and revealed the town had urged her to “not express your personal opinion publicly or privately,” a request Walker argued violates her free-speech rights.

Many residents urged councillors to reverse themselves or resign. After two new councillors were added via by-election, council voted to lift sanctions at another acrimonious meeting. “I don’t have a problem with you as mayor doing your job, but there are some instances that just got out of control,” Vicky Smith said, according to the Manning newspaper. Walker remains bitter: “This was absolutely a mean, vicious vendetta.” (Maclean’s was unable to reach councillors for comment.)

Helen Rice, a councillor since 1979 in the northwest city of Grande Prairie, Alta., is familiar with mayors who were council pariahs. Being outvoted normally takes care of the rogues, she says, worried that what Manning and Gibbons did will become a trend. “It seems to me to be almost overkill. How do you strip somebody of powers who’s been elected by the people?” says Rice, past president of the Alberta Urban Municipalities Association.

Recently passed Alberta legislation will eventually require all councillors and mayors to sign codes of conduct, which would more clearly lay out expectations and punishments (but still no turfing). Rice believes that if everyone knows what they’re getting into, it will help prevent further flare-ups. The NDP government’s further review of the municipal law will consider “additional tools to enhance municipal accountability,” the municipal affairs minister’s spokeswoman says in an email.

Gibbons proposed scrapping mayoral elections, letting seven elected councillors instead nominate a leader. Locals persuaded them to abandon that idea, including Horner’s 10-term predecessor, who is disappointed at the stubborn conflict. “It belies the principles of a small town. You tend to think of a small town as a friendly atmosphere; people help each other,” Bill Nimmo says.

The next local elections are in October 2017, and there’s no sign sanctions will end in Gibbons or Fort Macleod by then. These three chastened politicians haven’t said whether they’ll run again to let the voters gauge whether they’re suitable mayors.