Drever was expelled from caucus after inappropriate social media posts 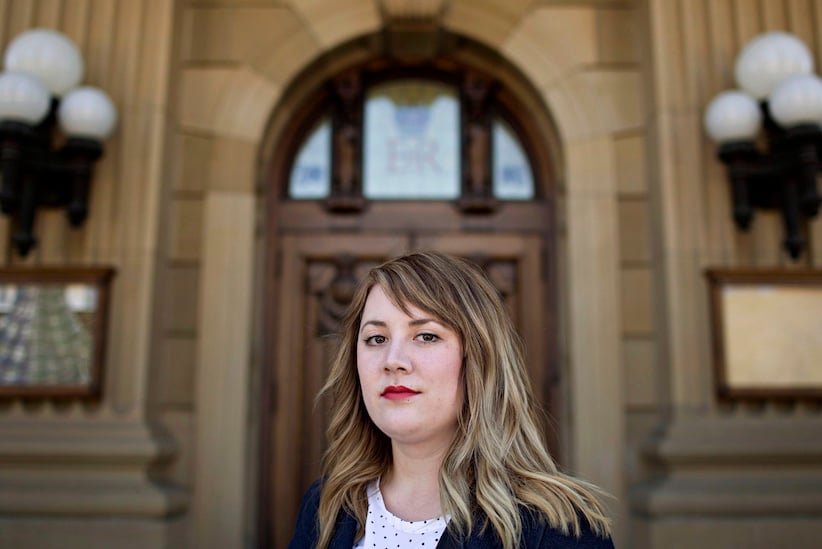 Notley’s office has confirmed that Drever will be welcomed back into the fold.

Drever, 27, has been sitting by herself across from her NDP colleagues for more than 200 days as the legislature’s lone Independent.

In that time she became a lightning rod for fevered — and at times vicious — political and social media debate over public accountability, criticism of public figures and the double standard of hate directed toward men versus women.

She also became a cautionary tale for youth sowing their wild oats on a cyber-medium that distributes images and comments around the world in a heartbeat.

Drever was a third-year sociology student when she ran and won in Calgary-Bow in the May 5 election.

In the days that followed, several questionable online photos from her past surfaced and sparked petitions demanding she quit or be removed.

One Facebook photo was of Drever at age 19 in dark glasses hamming it up beside a marijuana T-shirt. Another showed a disembodied hand giving the middle finger to the Canadian flag.

The major focus of concern was an album cover photo for a garage band. It depicted Drever, at age 23, on her back, legs apart on the concrete against a chain-link fence, and restrained by one of four men while another stands over her with a bottle.

Her story on why she posed for the album, titled “Fear of Attack,” has changed over time.

In an interview with The Canadian Press last May, she said she was in the dark about the shoot.

“I wasn’t aware of the premise of the photo beforehand and I was just asked to do this, and I did it,” she said.

However, earlier this week, in an interview with the Calgary Herald, she said she was aware of the photo’s nature, but had been intentionally misled by band members, who told her the photo was not about a woman being attacked but about a woman, in fact, being saved from attack.

The indiscretions prompted Premier Rachel Notley to keep Drever in the government caucus on the proviso she develop a plan to heighten awareness of violence against women.

But Notley expelled her from caucus on May 22, just over two weeks after the election, when homophobic online Drever comments, written months earlier, about the Progressive Conservatives surfaced.

Notley said she would review Drever’s status within a year.

In the house Drever has performed as a de facto member of the NDP caucus. She has voted with her erstwhile colleagues on bills and asked what are derisively known as “puffballs” — questions intended to hold the government to account but are launch pads for cabinet ministers to expound on government achievements.

Drever’s single accomplishment was shepherding through a private member’s bill in December that makes it easier for spouses to break their leases without penalty to flee violent situations.

The bill passed with unanimous support and dovetailed with Drever’s personal experience.

She has said she was abused as a child and was in and out of foster care well into her teens.