Alberta Party: stuck in the middle with few 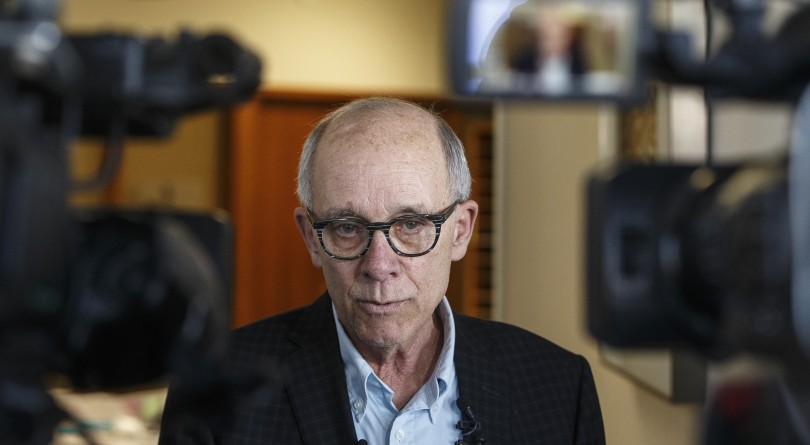 The Alberta Party vies to be the province’s political Goldilocks. Take their corporate tax plan—not too hot like the NDP’s current 12 per cent, but not too cold like the United Conservatives’ proposed eight. Alberta Party thinks 10 per cent is just right.

With the left-wing New Democrats and consolidated right-wing UCP slugging it out, you might believe that there’s never been so much room for a centrist option in Alberta politics, in the broadly vague ideological space the Progressive Conservatives used to occupy for much of their four decades in power. And that belief would be wrong, thus far. The party that elected its first MLA in 2015 has never cracked double-digit support in a poll. The Alberta Party has taken in some prominent old Red Tories disillusioned by Jason Kenney, including leader Stephen Mandel, a former Edmonton mayor and Alberta Tory health minister, but Rachel Notley’s party has been chasing many of those moderates with more apparent success. With little money in the bank—not enough for billboards or broadcast ads—the third horse in Alberta’s two-horse race must scrap to make any gains, and seriously risks losing the seat it won last time, as well as the ones it gained in Calgary from a couple floor-crossers.

In the Alberta Party’s third election since forming as a very Twitter-savvy group of forward-looking pragmatists remain the Party of Perpetual Tomorrow. They still struggle to define themselves to the public—it takes half of the pamphlet that came to my house to merely describe what the party is (“a fresh, positive and creative approach to getting things done,” among other platitudes.) “If you say you’re of the right or of the left, they know what you mean by that,” Mandel says over coffee in Calgary. “When you say you’re of the middle, they say ‘oh what’s that?’”

How’s the trail going? Some days are good and some are bad, Mandel replies. It’s hard to break through the UCP-NDP binary and the deep enmity Albertans feel for one side or the other, he concedes. “They’ve created a huge polarized atmosphere where (it’s) ‘I cannot vote for anybody else but A or B because I can’t think of the other guy getting in, and you guys aren’t strong enough yet. If you were doing better, we’d think about you more.’”

The party has drawn some attention with provocative ideas like requiring all schoolchildren be vaccinated, and finally modernizing Alberta’s archaic heath ID cards of paper and dot-matrix print. Kenney’s platform adopted the latter idea. Respect for ideas help, Mandel says, but he needs seats (the party’s best shot is the one Greg Clark won last time in Calgary, not Mandel’s in suburban Edmonton). The Alberta Party needs momentum, and there’s no sign it has caught any yet.

Mandel gets a lectern at the leader’s debate this week, but so does David Khan of the similarly centrist (and rapidly fading from relevance) Liberals. That’s one more voice the Alberta Party will have to scream to be heard over, in an already incredibly noisy campaign.

The saga of the United Conservatives’ “kamikaze candidate” took its latest weird steps Monday, when the lawyer for Jeff Callaway, relatives and the man alleged to be his chief campaign bankroller pleaded in court  to halt the Alberta election commissioner’s investigation into their financial dealings—at least until after the election. Jason Kenney’s team heavily orchestrated Callaway’s recruitment, UCP leadership campaign and its premature end. Yet Kenney has maintained he knows nothing of the lawyer’s bid for an emergency injunction to stop this drama from making election headlines and headaches for the party.

With this court appearance, longtime conservative organizer and lawyer Ivan Bernardo may have created more mid-campaign public attention. He claimed risk of “irreparable harm” to his clients, accused commissioner Lorne Gibson of bias, and suggested he “should be entirely focused on the election prescribed by our constitution and they should pause any investigation related to an 18-month-old internal party contest.” The judge will issue her decision Wednesday, and Bernardo declared in court his clients won’t sit for commission interviews scheduled Tuesday. Gibson has levied $35,000 in fines to Callaway aides and donors in the last month, and has continued to issue penalties during the campaign—as the wheels of justice traditionally don’t grind to a halt for the sake of political contests. (CBC)

Jason Kenney may call the NDP government’s plan to buy rail cars for oil shipments a $3.7-billion “boondoggle” and vow to shred the contracts. But further signals emerged Monday that the program, announced a month before the election call, is too far down the track for him to do anything. Reuters reports:

Two sources at midstream (energy transport and/or marketing) companies that have already signed three-year contracts with the Notley government said the plan is moving ahead regardless of who wins the election. “They can tear (the contract) up all they want, but I still have an email copy,” one source said. “Anybody on a platform in front of 1,000 people can say what he wants…that’s not going to affect how the real world works.”

Notley touts the plan as one that will ease the oil supply glut while the Alberta awaits pipelines, and it’s become more necessary amid recent news Enbridge’s Line 3 to the U.S. will be delayed to late 2020, instead of moving oil this year. She also predicts the government’s stint as an oil shipper will net the province $2.2 billion over three years—an interventionist’s dream outcome. In fact, her promise to balance Alberta’s budget by 2023 appears partly based on that windfall, which makes you wonder if a re-elected NDP may get used to that sort of business role.

Don Braid on Notley’s play for Calgary: “Notley hasn’t been speaking directly and emotionally to the deep anger many Calgarians feel. Her habitual tone of steady competence seemed a bit distant. She didn’t appear to be taking Calgary’s troubles personally. That changed Monday when she talked about the city and the Trans Mountain pipeline.” (Calgary Herald)

Colby Cosh on how election results could get weird: “For now it seems like a safe assumption that this is an ordinary two-party election. Which leaves us with a different question: if the election is close in the overall number of votes, which party’s votes will translate to seats more efficiently? Alberta has never held a close election, either vote-wise or seat-wise, at all. But other provinces, most memorably B.C., have encountered the scenario in which a party ‘loses’ in the popular vote count and wins a majority anyway.” (National Post)

Rob Breakenridge on the “silly” equalization referendum idea: “But why this obsession with equalization? What is the point of a costly referendum that has virtually zero chance of accomplishing much of anything, let alone anything that could benefit Alberta? Equalization has come to symbolize Alberta’s disproportionate contribution to Confederation, but it is a federal program and as a former federal cabinet minister UCP Leader Jason Kenney knows full well how it works.” (Calgary Herald)

CLARIFICATION: Yesterday’s newsletter incorrectly stated that the Ekos poll conducted for Unifor did not use a randomized sample. In fact, part of the survey respondents came from a previously randomized sample of Albertans.