Rachel Notley holds a slight edge as Albertans' preferred premier, but the UCP has greater traction on dominant issues like the economy and pipelines 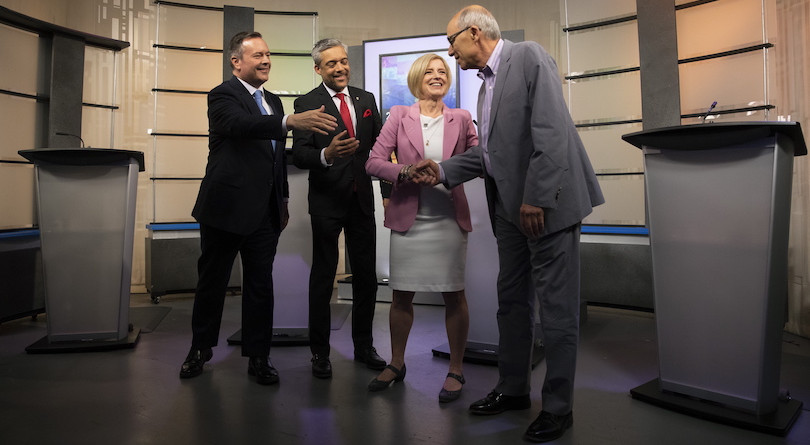 Jason Kenney’s UCP has seen its lead over the NDP slip to six points in the campaign’s final weekend, but it remains headed to form majority government thanks to strong support outside Alberta’s capital city, according to a new Pollara-Maclean’s poll.

Province-wide, the United Conservatives were the choice of 45 per cent of respondents surveyed from Friday to Sunday—a standing unchanged from one a few days earlier. The NDP is now at 39, up a single percentage point—well within the margin of error for a typical sample of 1,005 Albertans. Rachel Notley’s party had widened its lead in Edmonton, and is now at 61 to 24; but trails by a large margin in Calgary, 51 to 33, and by even more in the rest of Alberta. Alberta’s 87 constituencies are roughly carved into three components: Calgary, the Edmonton region, and the rest of the Alberta’s smaller cities and rural areas. To win the province, a party traditionally must claim two of the three. 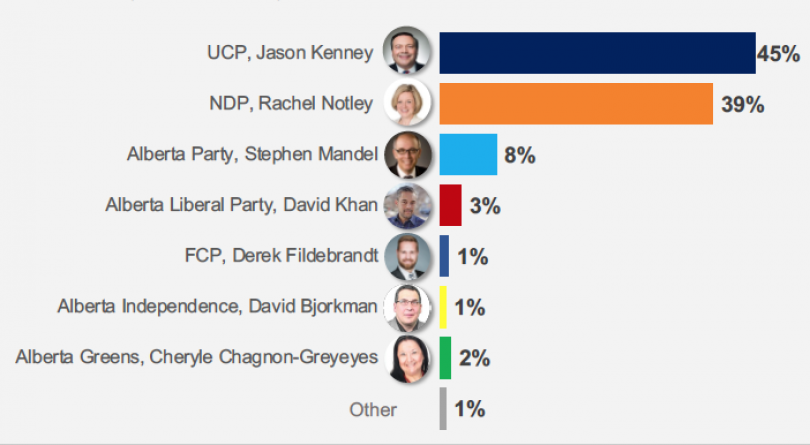 A deeper breakdown of Pollara’s survey results suggests the UCP leads in the clutch of seats surrounding Edmonton (46 points to 33), which the NDP swept in its 2015 majority victory; but the race is close in the rural north (47-44), where NDP is defending several seats; and in the rural south (45-42), where the NDP holds seats in Lethbridge amid a sea of Conservative blue. UCP dominates in rural central Alberta (58-21) and the ridings outside Calgary (55-24). But these finer regional breakdowns, with small sample sizes, are harder to gauge with precision.

Pollara Strategic Insights conducted an online survey among a randomly-selected sample of 1,005 Albertans, statistically weighted according to gender and regional proportions of the population. As online surveys are not based on probability samples, a margin of error cannot be applied. A probability sample of this size would carry a margin of error of +3.1 percentage points, 19 times out of 20.

Behind the NDP and UCP, other parties lag far behind and will scrape to win any seats. Stephen Mandel’s Alberta Party has province-wide support of eight per cent of respondents, while the Liberals sit at three points; other parties have two points or fewer.

Notley holds a narrow edge as Albertans’ preferred premier, leading Kenney 38 per cent to 35. Unsurprisingly, that splits up largely along party lines, with Notley being the best premier in the view of 95 per cent of NDP supporters; Kenney’s popularity among his UCP supporters is less iron-clad, with 83 per cent of them saying he’d be the best premier.

The stark ideological differences between parties also drives highly divergent motivations for NDP and UCP supporters. Pollara asked voters for three main reasons to back each main party. Voters are drawn to the NDP because they’re seen as the best party to represent Albertans of all backgrounds and to provide ethical, accountable government. Notley has spent much of the campaign drawing attention to controversies and investigations into the conduct of United Conservatives in the 2017 party leadership Kenney won, a series of intolerant comments his candidates have made, and his plans to ease protections for school gay-straight alliances. Those top two reasons are followed by a desire to not let other parties form government, and belief the NDP is the better party for Alberta’s economy and getting pipelines built.

UCP voters are overwhelmingly driven to back them because of the economy and pipelines, which repeated surveys have shown are the dominant issues among Albertans. The other key motivator for UCP supporters is their belief Kenney will be strongest on relations with Ottawa. “If this election is about equity and ethics, then you’re voting NDP,” says Craig Worden, president of Pollara. “But, if you’re casting your ballot based on pipelines and getting tough with the feds, you’re far more likely to be voting UCP.” 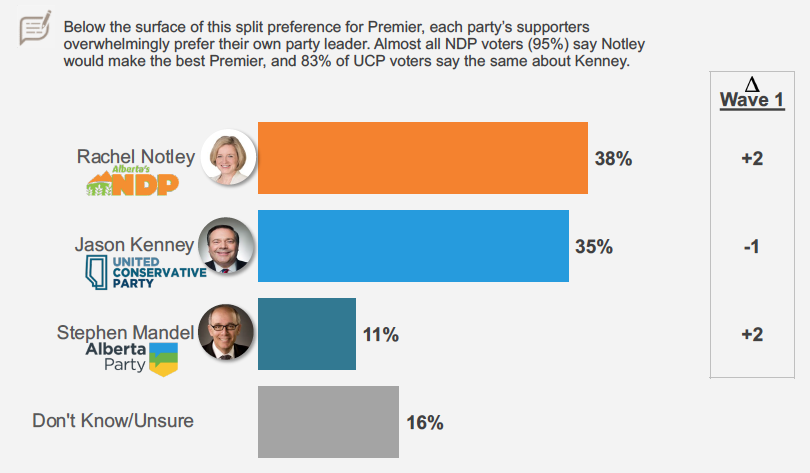 The election verdict or margin of victory could depend heavily on which Albertans show up to vote. While Kenney’s party leads Notley’s comfortably among men (48-36), the NDP is ahead among women (42-41). UCP runs on grey power, leading (53-35) among Albertans aged 55 and up, while New Democrats hold the edge among the voters aged 34 and younger (43-34).

In this polarizing election, both sides appear willing to jog across lava fields to cast their ballots. Eight-six per cent of UCP supporters say they are absolutely certain to vote or have voted in advance, compared to 85 per cent of NDP voters. When intent is equally strong among the leading parties, the question comes down to which party has the best get-out-the-vote effort, Worden says.