All the obstacles standing between Jagmeet Singh and a revived NDP 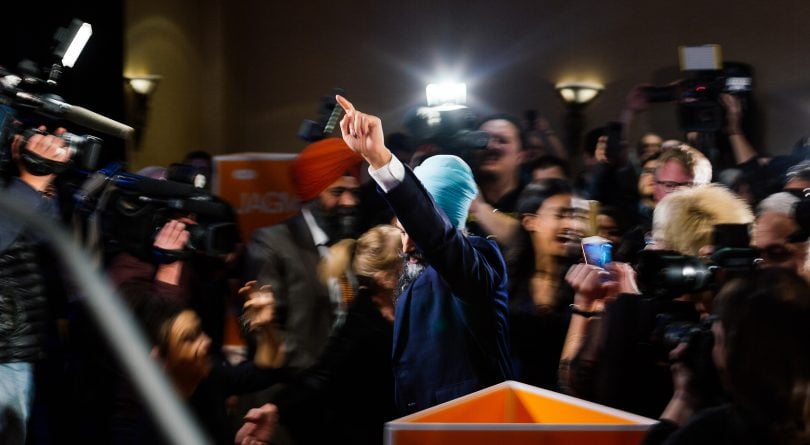 The facts of the matter don’t wholly warrant the New Democratic Party’s outward appearances of jubilation now that their leader, Jagmeet Singh, is finally assuming his place in the House of Commons and, at last, the national spotlight. But it is what it is.

While Singh easily trounced his rivals in the Feb. 25 Burnaby South by-election, he did so by winning only 39 per cent of the ballots cast by the 30 per cent of voters who bothered to show up. More precisely, he’s off to Ottawa thanks to only 8,848 of the 76,204 people on the riding’s voter registry.

This is not what you’d call the most glorious beginning of the NDP’s long march to the federal polls in October. Nine out of 10 NDP riding associations across the country don’t even have a declared candidate yet. Of the 338 MPs in the House, only 41 are New Democrats and 13 of them have already announced they won’t be running again. More dropouts are expected. Meanwhile, the party’s finances are a shambles—the NDP pulled in $1.97 million in the fourth quarter of 2018, the poorest haul since 2011.

So it will be a while yet before we know what Singh’s version of the NDP will look like, and what it will be about exactly, beyond the broad policy strokes that tend to situate the party quite reliably between Justin Trudeau’s Liberals and Elizabeth May’s Greens.

Further than that, all that can be said is that it’s Singh’s party now. And Singh might just have what it takes to make life miserable for Trudeau’s battered Liberals, especially now, on account of a stunning stroke of luck in Singh’s favour. While Singh was campaigning in Burnaby South, the SNC-Lavalin story was making a wreckage of Trudeau’s assiduously cultivated brand: Canada’s magnificently progressive, feminist Prime Minister, the champion of Indigenous rights, the Davos hero on the cover of Rolling Stone magazine. And from the outset, Singh was itching to challenge Trudeau’s brand by seeing him and raising him.

If Trudeau was young—he’s 47—Singh was younger—he’s 40. If Trudeau was progressive in the fashionable “woke” mode, Singh was the real article—a natty, bicycle-riding, full-bearded Sikh, a crusading lawyer, and now the first person from what Statistics Canada calls a visible minority to lead a federal political party. Trudeau has his stylish socks, but Singh has his colourful turbans. He’s edgier. And he’s a better dancer, especially when it comes to bhangra.

But is this really what the NDP is supposed to be about?

It wasn’t that long ago that the NDP had a much clearer sense of what it was there for, what it stood for, and who it spoke for. It was a socialist party, or at the very least a social-democratic party, and it was rooted in the working class and in the labour movement. It arose from the social-gospel churches of the Prairies. It extended its reach into the great social justice struggles of 20th century. But then came the 21st century and the debilitating incoherence that ran straight across the “left” following the al-Qaeda attacks of 9-11. Meanwhile, the old industrial working class withered in the maelstrom of globalization and free trade. And then came the rise of identity politics.

New Democrats thought they’d finally hit the right notes with Jack Layton, who won the job of Official Opposition leader for the first time in the party’s history. But the fluke at the root of his success was conveniently overlooked: it was the collapse of the Bloc Québécois. More than half of the NDP’s 103-member parliamentary caucus came from Quebec ridings that had never voted NDP.

By the 2015 election, after a decade of Stephen Harper, voters wanted a change, and they wanted it fast. Along came the dashing Trudeau, who swept into power after outflanking Thomas Mulcair’s budget-balancing NDP from the left.

Mulcair was ignominiously ousted at the NDP’s April 2016 national convention in Edmonton, owing mainly to getting caught in the middle of an identity crisis that pitted ultra-green Leap Manifesto enthusiasts in one corner against Alberta Premier Rachel Notley’s pragmatists in the other. The party was rudderless and adrift until the federal NDP convention of October 2017, when Singh won the leadership race on the first ballot.

In the early innings, his performance wasn’t promising. The awkwardness began with a strangely evasive interview he gave to the CBC’s Terry Milewski. Singh couldn’t bring himself to denounce fringe extremists in certain Sikh temples who continue to lionize Talwinder Singh Parmar, the terrorist mastermind of the 1985 Air India bombing. Singh later insinuated that Milewski’s questioning was racist. It took him weeks to back down and properly distance himself from Parmar’s admirers.

Then there was the time Singh asserted that judges appointed to the Supreme Court needn’t be required to speak French so long as they can speak an Indigenous language, and was forced to reverse himself after learning the NDP’s policy on Supreme Court appointments.

More recently, Singh found himself publicly at odds with NDP foreign affairs critic Hélène Laverdière and caucus chair Matthew Dubé on whether Juan Guaidó should be recognized as Venezuela’s interim president. It was another case of not knowing, apparently, what his own party’s position was on a subject of immediate concern in Parliament.

Several MPs had made it clearly but quietly known that Singh had to get himself a Commons seat, and that if he failed, he’d be pressured to resign as leader. So it was welcome news when the Trudeau government finally got around to declaring a by-election date for Burnaby South. Singh finally had his chance to run for the House of Commons.

Burnaby South wasn’t going to be a slam dunk, but the NDP had the upper hand, and it expended a great effort to get Singh elected. Singh’s campaign was short on detail and issues (housing, the environment, health care) and long on principles and rhetoric. But it was also something of a rerun of his leadership campaign, with its emphasis on Singh’s background and identity—the struggles of his immigrant parents, the bullying he put up with as a child, and his own up-by-the-bootstraps story of growing up in Newfoundland, Scarborough and Windsor.

This is all fair enough, and it might make an impression in Quebec, where voters are burdened by a weird aversion to religious symbols like turbans. But there was nothing novel in Burnaby about Singh’s candidacy as a person of colour. In 1972, the voters of what was then a mostly white, working-class constituency—Burnaby–Edmonds—elected the NDP’s Rosemary Brown as their MLA. Brown was the first Black woman elected to a Canadian legislature. In 1975, Brown ran for the leadership of the NDP, coming in a close second behind Ed Broadbent. 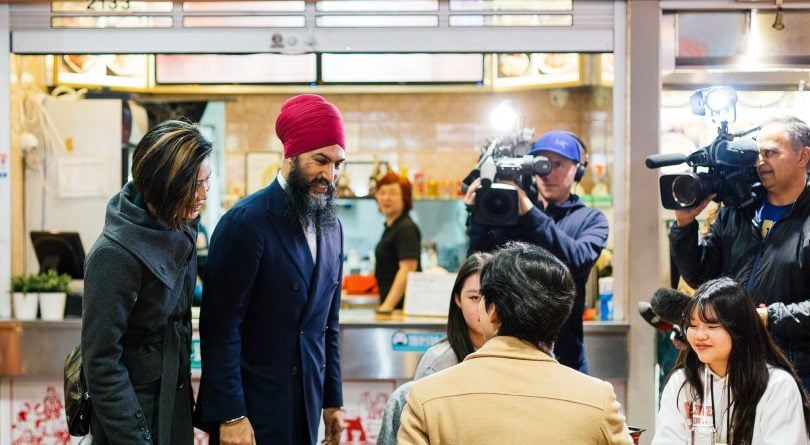 In Burnaby South, it’s practically impossible to not be a member of a minority group. Census Canada reports that 38.7 of the riding’s residents identify as being of Chinese origin, 32.2 per cent say they’re of European extraction, and the final 29.1 per cent identify as South Asian, Filipino, Korean, Black, West Asian and so on. Neither will Singh be particularly remarkable in Parliament as a turbaned Sikh. In 2015, 20 Sikhs were elected to the House of Commons.

During the by-election campaign, “race” erupted in nasty ways, twice, but neither occasion turned to Singh’s disadvantage.

Liberal candidate Karen Wang caused an uproar when it was revealed that she’d posted on the Chinese social media network WeChat that she was the candidate to back because she was Chinese and therefore had a head start on Singh, who she identified as being “of Indian descent.” Liberal headquarters ended up replacing her with Richard T. Lee, a longtime B.C. MLA whose associations with former B.C. premier Christy Clark’s government probably didn’t do him any favours. Lee came in second, trailing Singh by nearly 3,000 votes.

The second incident occurred at an all-candidates meeting, when Laura-Lynn Tyler Thompson of Maxime Bernier’s right-wing People’s Party raised the lighting-rod subject of the murder of Burnaby teenager Marrisa Shen. A Syrian refugee has been charged with her murder. Thompson used the case to raise alarms about proper refugee “vetting.” There was a lot of shouting.

Thompson’s entourage throughout the by-election campaign did not consist of the stereotypical white yobs who like to shout about refugees. They were mostly Chinese-Canadians.

READ MORE: What if Jagmeet Singh really did have a $5.5 million mansion? Should we care?

Much of Thompson’s 2,242 vote tally may or may not have bled away from Conservative third-place finisher Jay Shin (5,147 votes), and Singh is fortunate that Green Leader Elizabeth May invoked a traditional “leader’s courtesy” and declined to run a candidate against him.

Singh’s profile likely gave him an edge in the race, but he isn’t even the first NDP leader to launch his federal career in a Burnaby by-election. That title goes to Tommy Douglas, the Saskatchewan premier and leader of the NDP’s pioneering predecessor, the Co-operative Commonwealth Federation, back in 1962. As leader of the NDP, Douglas won three elections in a row in the riding of Burnaby–Coquitlam.

Going back further, Burnaby was also once the home of the Army of the Common Good, a radical workers’ co-operative during the 1930s that ran its own stores, farms and logging operations. It even printed its own currency, known formally as labour units, but usually called “lulus.” At the time, one of the army’s closest allies was Burnaby’s mayor, the crusading socialist William Pritchard, one of seven men convicted for sedition in the Winnipeg General Strike of 1919.

Nobody saw it coming when the SNC-Lavalin volcano erupted underneath Trudeau’s Liberals, and a great many voters might decide to give Singh’s New Democrats a try when October comes around. Or Singh might just put his foot in something, leaving the Liberals safe from harm. Or the liberal-left vote might split sideways to the electoral advantage of Andrew Scheer’s Conservatives, leaving everybody to lament about vote-splitting.

Either way you slice it, the NDP is Jagmeet Singh’s party now. It is what it is. 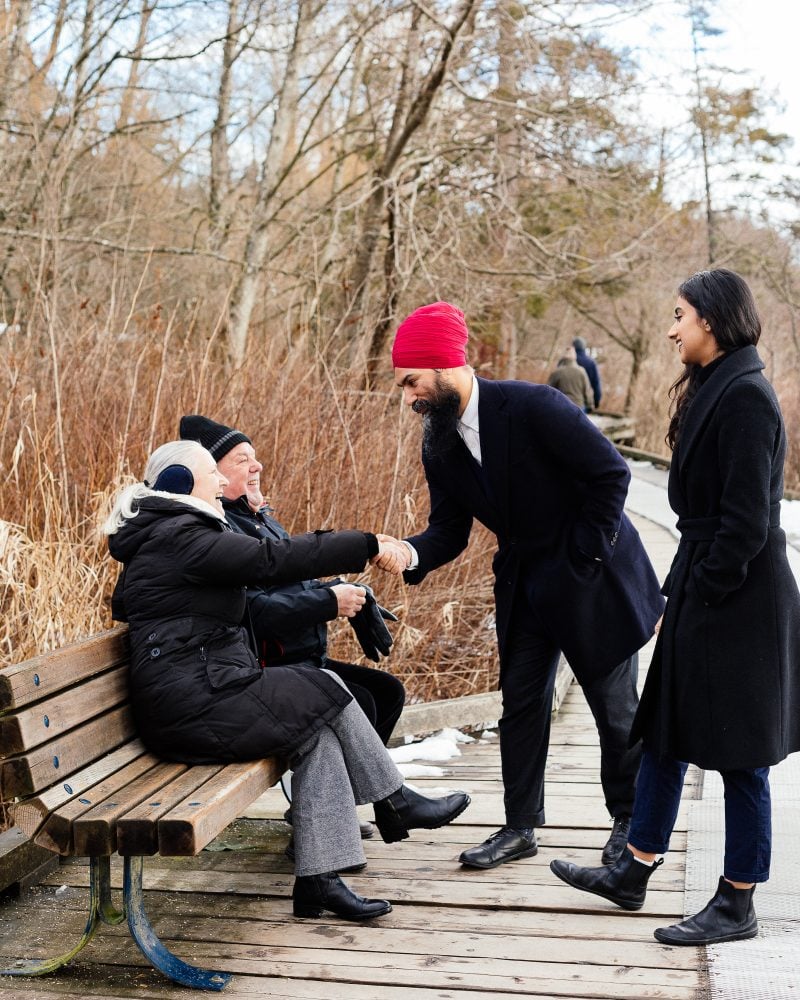