America's own Marie Antoinette? Not so fast 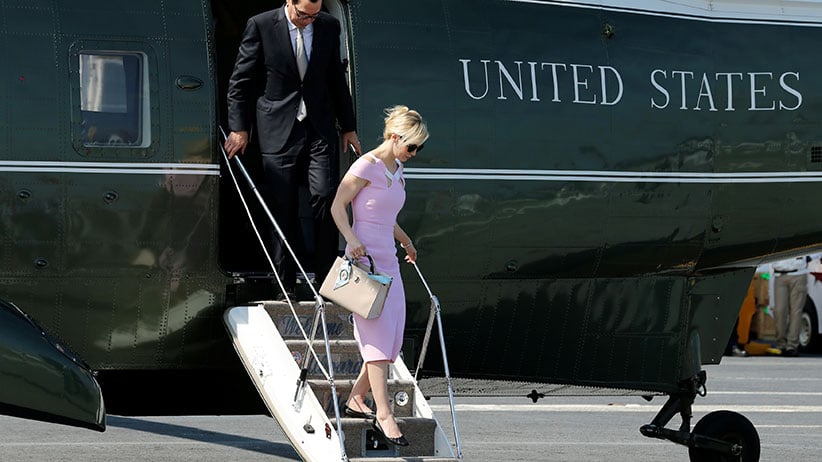 Linton and husband Steve Mnuchin, the U.S. treasury secretary, step off the Marine One helicopter, with President Donald Trump, on the deck of the aircraft carrier USS Gerald R. Ford  (Jonathan Ernst/Reuters)

Sadly, Louise Linton didn’t post an Instagram photo of a world plunged into darkness as she and her husband, U.S. Treasury Secretary Steve Mnuchin, stood atop the nation’s gold at Fort Knox on Monday watching the solar eclipse on the American taxpayer’s dime. Thus we’re forced to visualize that perfect metaphor for the Trump presidency disclosed on Friday—one that captures the wilful blindness of both Trump’s base and Republicans to the self-enrichment rife in the Trump administration against a backdrop of percolating class war.

Donald Trump is a man of many cons. None has been as successful as the way he harnessed his alleged wealth, marked by a third-world dictator’s taste for gold leaf, as a tool to cement loyalty with his economically disenfranchised base. As the humorist Fran Lebowitz famously put it: “[Trump’s] a poor person’s idea of a rich person”… “All that stuff he shows you in his house—the gold faucets—if you won the lottery, that’s what you’d buy.” His followers bought the millionaire’s son claim that he was “one of them.” Trump’s alleged wealth allowed them to cleave to the delusion that the businessman would be immune from financial corruption in office because he didn’t need the money; he even made a show of donating his $400,000 annual salary to charity. Trump’s “us” versus “them” populist message had particular resonance amid mounting national income inequity;  the One Percent now earn more than nine times more income on average than the bottom 90 per cent.  Trump’s followers could also dream that somehow the alleged billionaire’s gilt-dust would rub off on them.

This base also swallowed Trump’s “drain he swamp” promise even as he installed a private swimming pool, metaphorically speaking; the net worth of his top-feeding cabinet is estimated at $4.5 billion. Many were Goldman Sachs veterans; all stood to benefit mightily from tax cuts for the rich, removing industry protections, even a major war if it came to that. One was Steve Mnuchin, who like Trump, had daddy pave his professional path (his father was a Goldman Sachs partner). Mnuchin later branched out—producing Hollywood movies, running a hedge fund, and gaining infamy for aggressively foreclosing on mortgages after the 2008 downturn. He’s estimated to be worth $300 million, but who knows? Mnuchin failed  to report close to $100-million in real estate assets, as well as his position as a director of a Cayman Island holding corporation, on financial disclosure forms before his confirmation hearing. His family was one of the few to benefit from Bernie Madoff’s pyramid scam.

RELATED: In Donald Trump they trust

Yet it wasn’t Donald Trump or his privileged male inner circle or Steve Mnuchin who’d be tarred with allusions to the court of Louis XVI when they inevitably came. Instead, comments made by Mnuchin’s wife, Louise Linton, on Instagram on Monday branded her the Marie Antoinette of the Trump administration. Social media stormed the Bastille after the actress posted an image (since deleted, with her account set to private) of her stepping off a government plane with her husband in Kentucky, the fifth poorest state in the union. She used the trip, in which her husband was scheduled to discuss Trump’s tax reform, to rhyme off the expensive clothing she was wearing: “#hermes scarf, #valentino rockstudheels, #rolandmourette pants, #tomford ‘sunnies’.”

When  called out by commenter Jenni Miller for travelling on government coffers (“Glad we could pay for your little getaway. #deplorable”), Linton responded by wealth-shaming her: “I’m pretty sure we paid more taxes toward our day trip than you did,”she wrote, going on to poor-shame the woman as well: “Pretty sure the amount we sacrifice per year is a lot more than you’d be willing to sacrifice if the choice was yours,” a comment that indicates zero understanding of relative tax burdens of the rich and poor. She also boasted of her husband’s contribution to the economy, again tone-deaf to reality. She added a patronizing: “Your life looks cute,” with kiss-blowing emojis.

That it was Linton, and not Trump or his cabinet, that summoned a firestorm over class insensitivity is predictable. Women are more readily painted as social climbers or “gold-diggers,” in part because that’s a time-honoured route to female wealth. Wives routinely serve as mannequins for their partner’s material success: we’ve seen Melania Trump  dining on diamonds on the cover Mexican edition of Vanity Fair and wearing a $51,000 Dolce and Gabanna jacket at the G-7 in Italy. (That said, Marie Antoinette comparisons have not dogged FLOTUS the same way, perhaps because she already appears to be in her own version of La Conciergerie prison. The comparisons also can be taken too far when applied to Trump: the Queen of France may have been a showy, profligate spender but she also influenced national decision-making, something you can’t say about any woman in the court of Donald I).

RELATED: Trump has no intention of releasing his tax return

It isn’t the first time Linton, an Edinburgh native whose privileged childhood included boarding schools and weekends at the family castle, sparked a national cause célèbre. Last year, in her self-published memoir, In Congo’s Shadow: One Girl’s Perilous Journey to the Heart of Africa, Linton recounted escaping attacks by Congolese rebels when she did a volunteer stint in Africa at age 18, and referred to herself in third person: “A ‘skinny white muzungu with long angel hair,’ Louise was an anomaly in darkest Africa.” The book’s white-saviour complex and factual inaccuracies were denounced by the Zambian High Commission in London and summoned the hashtag  #LintonLies. Linton apologized on Twitter; the book was pulled.

Linton, who claims to hold a B.A. in journalism from Pepperdine, a Christian university in Malibu, Cal. and also a Juris Doctorate in Law from the University of West Los Angeles (a school accredited by the State Bar of California but not the American Bar Association), also fits nicely into the reality TV construct shaped by the hugely successful, ridiculous “Real Housewives of” franchise, one that presents women fighting with one another when they’re not shopping or grasping for money. Linton didn’t allow her avowed vegetarianism to stand in the way of her being named “inaugural Brand Ambassador for a British leather goods company which launched a handbag line “The Linton Collection” in her name.

Linton became Mrs. Steve Mnuchin III a few months ago in a lavish ceremony officiated by Mike Pence. Shortly after, Town & Country ran a story,“All the Jewels Louise Linton wore to her wedding,” in which the bride bragged about her 12 jewelry changes. Of one necklace, she gushed, “It fills me with awe to consider that before they were found, these diamonds had been sitting undisturbed beneath us for hundreds of millions of years over 100 kilometers deep in the earth’s mantle,” again oblivious to horrific conditions required to extract the raw gems.

This week, the upscale magazine received Linton’s “exclusive statement” of regret over her Instagram post: “I apologize for my post on social media yesterday as well as my response. It was inappropriate and highly insensitive.” Linton also denied being paid to promote the designers she tagged on Instagram, a common practice. No matter. She’s now persona non grata in the world she so desperately craves to inhabit. The designers she boasted of wearing want nothing to do with her; she’s banned from New York fashion week.

The Instagram furor hit just as excessive costs of the Trump presidency were trickling out: Secret Service being unable to afford to pay agents to protect the extended Trump family (the costs of the large family of Louis XVI was also a sore point) and  the  $13,500 on golf cart rentals and $7,100 for portable toilets the Secret Service required to protect the president during his recent vacation at his golf course. Trump’s them-versus-us comparisons are also becoming unhinged: “I think we’re the elites. They’re not the elites,” he told the crowd this week in Phoenix. Seconds earlier he betrayed his own social insecurity. “I went to better schools than they did,” he ranted. “I live in a bigger, more beautiful apartment, and I live in the White House, too, which is really great.”

Whether the Mnuchins ill-fated Fort Knox jaunt will be the beginning of a larger class backlash or whether they’ll be singularly vilified remains to be seen. Tax legislation structured to benefit the rich is boring. But the $12,000 worth of clothing Louise Linton was estimated to be wearing, a long list of luxury brand names most of America are familiar with but couldn’t buy without going into deep debt, or settling for knock-offs, is destined to strike a nerve.  So will her class snobbery, in a nation that pretends to be class-free. Is “Let them wear Valentino’s “Rock Stud Heels” the latest version of Marie Antoinette’s apocryphal “Let them eat cake”? We will see.