May 22: The NDP are now neck and neck with the PCs in the Ontario election and pot legalization could mean serious trouble for some immigrants.

The orange wave may overtake much of Ontario

Andrea who? Polls show the Ontario NDP has The Big Mo on its side, with the lead of the presumed government-in-waiting Progressive Conservatives down to as little as a point.

Paul Wells rode the Proletariat Chariot for a few days and found “something fascinating in Horwath’s old-fashioned willingness to answer a question in detail.” The third-election leader is hoping that Ontarians will decide against either/or and vote for more—necessary programs or unsustainable debt, depending on who you ask—this time. [Maclean’s story]

Speaking of PC problems, Elections Ontario is looking into the possible unsanctioned use of GTA highway drivers’ personal information in nomination contests during the time of Patrick Brown. The party—now with more Doug Ford!—said it knows nothing about any candidate selection chicanery. Anyway, if there’s a “mess,” the new leader says, it’s the last guy’s fault. [Globe story]

Across party lines, a Liberal candidate turned out to be a 9/11 truther—reformed, she claims. Her party, meanwhile, prefers to focus on the NDP’s supposed difficulty with sums. Les oranges’ seem to have minused instead of plussing right at the end of their platform tabulations, leading to $1.4 billion in misplaced fiscal forecasts. [iPolitics story, Canadian Press story, Ottawa Citizen story]

Over at Maclean’s, colleague Terra Ciolfe is charting and mapping the three possible premiers as they traverse the far corners of the province. [Maclean’sleader tracker] 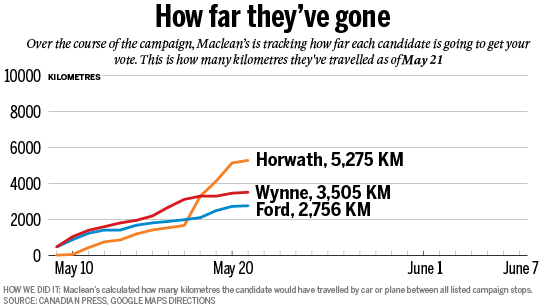 Back at it: MPs take their seats today for the longest single stretch of sitting scheduled on this year’s House of Commons calendar. The lower chamber doesn’t lift until the start of the summer recess, slated for June 22.

Andrew Scheer speaks today at a civic event in the city of his birth. The Conservative leader will be a few blocks away from Parliament Hill for his star turn at this month’s installment of Ottawa Mayor Jim Watson’s breakfast series.

Elsewhere in the capital, Dominic LeBlanc is being investigated by the ethics commissioner for his choice of Arctic surf clam source. A quota to fish the pearly commodity was given to a consortium linked at various points to a former Liberal MP, the brother of a current one, and the fisheries minister’s cuz by marriage. [Globe story]

Cabinet colleague Ahmed Hussen was in Nigeria last week, where the government undertook to do more to dissuade its citizens from attempting the U.S.-Canada crossing irregularly, and to swiftly deploy deportation-enabling documents. Closer to home, communication dissemination experts who looked at the government’s stay-away online advertising are asking, “Do you even Facebook?” [CTV story, CBC story, Global News story]

The government’s show of sternness as it prepares to legalize marijuana has a serious, presumably unintended, consequence: Pre-citizenship immigrants convicted of impaired driving could be deported because of the new, decade-long maximum sentence for the offence. Tourists travelling to Canada could also suffer side-effects from the change. [iPolitics story]

Some good news to start your short week: The “everybody” who hates Toronto includes Torontonians. Researchers found that farm-country Canadians are happier than urbanites. Whatever, at least we have Starbucks. [Toronto Star story]

For whom the bells toil

The House of Commons may be set for a parliamentary marathon of sitting days, but the dominion carillonneur who makes the Peace Tower sing may be expressing some polite skepticism from the sky.

Andrea McCrady’s noontime set today includes such upbeat tunes as “Song of the Vagabond, “The Happy Wanderer,” and “I Got Plenty o’ Nuttin’.” Asked about the theme, McCrady tells Maclean’s it’s a short version of an upcoming summer recital called “Working Hard, or Hardly Working?“

In the lazy days of an Ottawa summer, that makes for an innocuous title. With parliamentarians working below, it’s a lunchtime gut check.