Oct. 19: The Conservative leader refused to say if he'd keep marijuana legal if he wins the next election, even as others argue Ottawa should now decriminalize hard drugs, too 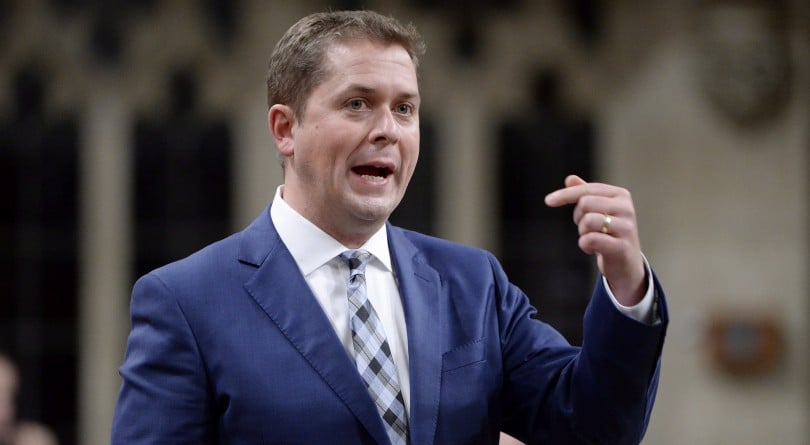 Conservative Leader Andrew Scheer speaks during question period in the House of Commons on Parliament Hill, in Ottawa on Tuesday, Oct. 16, 2018. THE CANADIAN PRESS/Adrian Wyld

In Ontario the only place to legally buy marijuana is through the government’s own online shop. Yet illegal marijuana dispensaries continue to dominate the landscape of Ontario’s Tyendinaga Mohawk Territory, with dozens of stores selling marijuana on the reserve. And if the police attempt to shut them down, it would be “an act of war,” Jamie Kunkel, owner of one cannabis dispensary, tells Kyle Edwards. “The police would not pull it off. It will take the military to pull off a raid in our community. I don’t see that happening.” (Maclean’s)

Now that pot is legal, the Federal government should turn its attention to the next logical step of decriminalizing hard drugs, writes Stephen Maher. But one thing stands in the way: America’s harsh war on drugs.

That American influence might make it harder to take the desirable next step, which would be to pursue a policy like the one in Portugal, where hard drugs have been decriminalized and the government tries to help addicts rather than throwing them in prison.

We have excellent reasons to change our approach. We are losing thousands of Canadians to accidental opiate overdoses every year, an accelerating crisis that is steadily spreading misery. (Maclean’s)

Would a Prime Minister Andrew Scheer wage war on Trudeau’s legalization of pot? The Conservative leader is refusing to commit to keeping cannabis legal if he wins the next election: “The Conservative Party will do our due diligence, examine the consequences of this decision, and we’ll examine the reality on the ground.” (CTV News)

Beijing bound: Trade Minister Jim Carr and Finance Minister Bill Morneau will visit China next month to look at “deepening and broadening our trading relationship with China, sector by sector” but they won’t be negotiating a free trade deal, because of course, if they were, they’d have to notify Washington under the terms of the new NAFTA deal. (Canadian Press)

Donald Trump‘s trade war with China has already led to a boom in exports for Canadian farmers. Now that group is urging Canada’s Senate to quickly pass the legislation to enact the Comprehensive and Progressive Trans-Pacific Partnership (CPTPP) trade agreement so farmers can enjoy first-mover advantage in building out Canadian supply chains. Notes one observer: “There is huge benefit to us joining the agreement. This isn’t theoretical. It’s taking market share out of the pockets of the Americans. It simply doesn’t get any better for us on the trade front.” (CBC News)

Today in snarky Liberals #1: Intergovernmental Affairs Minister Dominic LeBlanc took a run at Doug Ford after being asked about the Premier’s ambitions for national office: “You get a four-year job, and you’re 10 per cent into it, and you’re already looking to upgrade? I can’t imagine that that’s very constructive.” (Huffington Post)

Today in snarky Liberals #2: A former Liberal candidate in the riding of Burnaby South, where NDP Leader Jagmeet Singh is running for a seat, says the Liberals should ditch the “leader’s courtesy,” a long-standing parliamentary custom of not running candidates in a by-election when a party leader is a candidate. “If you have a chance to beat up on a federal leader, then you do it,” says UBC business prof Adam Pankratz. “I don’t think it’s any secret that Jagmeet Singh is pretty widely considered a weak federal leader.” (Toronto Star)

For several days Conservative leader Andrew Scheer has gone after the Liberals about the fate of Jack Letts, a British-Canadian convert to Islam known as Jahidi Jack who went to Syria in 2014 and has been accused of fighting alongside ISIS. Scheer demanded to know why Federal officials had “proactively reached out to try to bring this individual … to Canada.” Now Lett’s father, Canadian-born John Letts, and his wife  Sally Lane have gone after Scheer, accusing him of lying about their son. “I am writing to you because I have to do something to challenge the misinformation that has appeared in the Canadian media recently — lies repeated and exaggerated by Mr. Andrew Scheer.” (CBC News)

Ottawa announced new rules to ban asbestos which will take effect at the end of the year, but the ban has several holes in it to accommodate Quebec businesses that extract magnesium from asbestos mining waste. Earlier this year the Quebec government gave one of those companies, Alliance Magnesium, more than $30 million in assistance in the form of loans and investment. (CTV News)