Andrew Scheer calls it 'NAFTA 0.5' but could he have done better?

Oct. 4: Scheer is focusing on the concessions the Trudeau government made to come to a deal, but some say the Conservatives would've been in the same boat 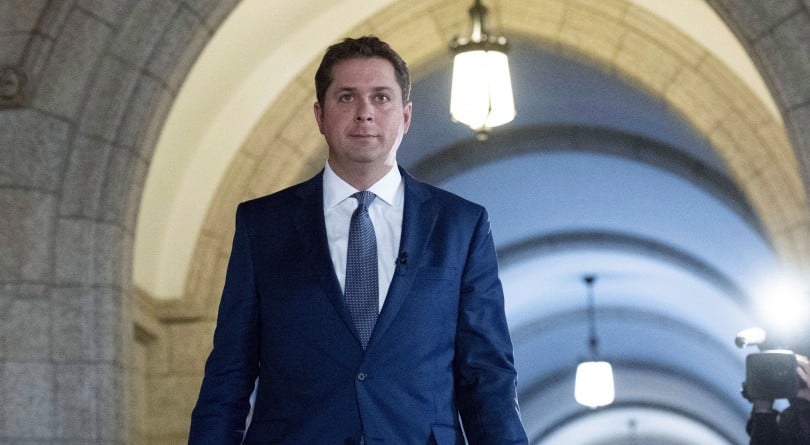 Conservative Leader Andrew Scheer makes his way to speak to media in response to the USMCA trade deal, in the foyer of the House of Commons on Parliament Hill, in Ottawa on Monday, Oct. 1, 2018. THE CANADIAN PRESS/Justin Tang

Ottawa opts for a do-over. The Trudeau government confirmed it won’t appeal a court ruling that blocked the Trans Mountain pipeline expansion and instead has opted to restart talks with Indigenous groups over the project. To that end Ottawa tapped retired Supreme Court justice Frank Iacobucci to lead the consultation. (CBC News)

Manitoba has scrapped it plan for a carbon tax, adding to the growing list of provinces vowing to fight Ottawa on the issue. Premier Brian Pallister said he made the decision because the Trudeau government has not respected Manitoba’s right to come up with its own plan at a lower rate: “We fought hard to try to get certainty with our plan, we haven’t been able to get it and now we have no choice, in my estimation to stand up and say no.”  (Global News)

When the $40-billion LNG Canada project got the go ahead to build a liquefied natural gas terminal on B.C.’s coast, Prime Minister Justin Trudeau and B.C. Premier John Horgan hailed the project for its potential to lower emissions. Many environmentalists beg to differ. So will Canada’s LNG exports to Asia help or hinder the effort to fight climate change? Economist Blake Shaffer argues the answer to that question is complex: “What we really want to know is which power source, or future power source, will no longer be needed as a result of LNG deliveries. Or, in economics speak: what is the marginal source of power? Will a future coal plant be shelved, or will plans to expand renewables be curtailed? (Maclean’s)

Donald Trump would not approve. Despite a clause in the new USMCA trade deal that would give the U.S. a veto over any possible future trade deal between Canada and a “non-market” country like China, Prime Minister Justin Trudeau says his government is set on pursuing closer economic ties with Beijing: “Obviously, China is a significant, growing player on global trade, and as always, we’ll look for ways to engage, deepen and improve our trading relationship with them.” Maybe, say experts, the way forward is with a non-trade-deal trade pact. (Globe and Mail)

To some on the right, the Trudeau government’s insistence on including a progressive agenda in the trade negotiations was a mistake that set Canada back. To many on the left, the fact chapters on gender rights and Indigenous people were dropped from the final USMCA deal was also a mistake that sets Canada back. But a close reading of the deal shows many of the progressive principles Chrystia Freeland championed at the outset found their way into the agreement. (Canadian Press)

With a new president, Mexico badly needed a trade deal with America, but the ‘new NAFTA’ has so far elicited a collective shrug, and isn’t expected to change much, writes David Agren:

The name of the newly minted United States—Mexico—Canada Agreement doesn’t exactly roll off the tongue in English—much less in Spanish. And unlike the old NAFTA acronym in Spanish, TLCAN (pronounced: tele-CAN), the new USMCA is an especially tortured tongue-twister. In fact, there still isn’t an official Spanish acronym—something Mexicans had fun with on Twitter as they mocked it, proposing everything from the alphabet soupish AEUMC to the tawdry-seeming yet clever MEXICANUS (which translates to “pertaining to Mexico”).

But even though the new trade deal topped political and business agendas, and was so important that the Mexican government—which reached a deal with America first—was willing to cut Canada loose to do so, Mexicans largely met the news with a shrug.

By the way, if you haven’t seen it, try the Maclean’s ranking tool to choose what name you think we should call USMCA.

Andrew Scheer has called the new agreement “Nafta 0.5” because of the concessions the Trudeau government made to get the deal done. But at least one former Tory prime minister isn’t sure Scheer could have done any better. “I think that it’s a bit cheeky for the Conservative leader to suggest that his party could have done better,” Kim Campbell told CBC during a Q&A. “To the extent that we’ve managed to dodge the bullet, I think all parties should take credit for it and not nit-pick.” (CBC News)