Annamie Paul finally has something to smile about

Election Image of the Day: Will positive results in a key internal party vote allow the Green Party leader to shake the blues? 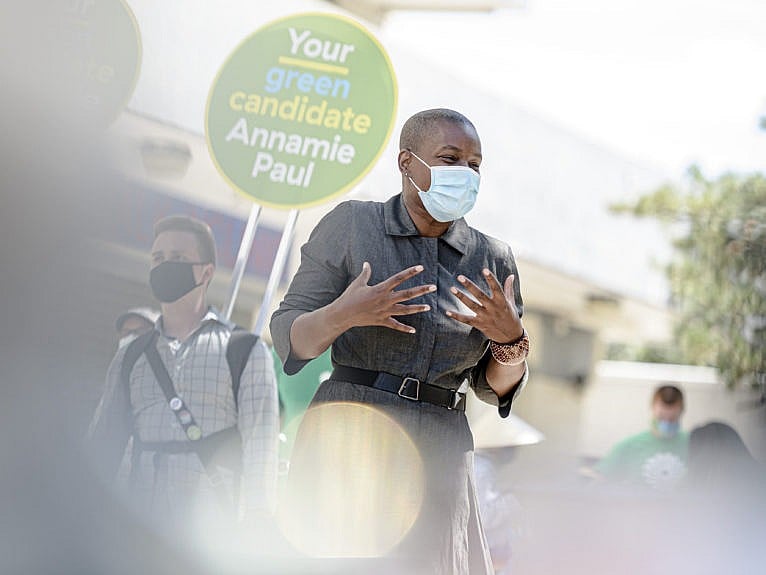 Paul canvasses a neighbourhood after launching her election campaign in the riding of Toronto Centre. (Christopher Katsarov/CP)

Annamie Paul hasn’t enjoyed many wins lately. Back in May, conflict between Israel and Hamas spiralled into a watershed moment for the federal Greens: the massive foreign policy question of how to deal with the Middle Eastern conflict cost them one of their three sitting MPs and sparked a movement to oust Paul as leader. Those calls subsided only a few weeks ago, and the party has mostly been quiet since then. Perhaps the sense of peace was because Paul and her supporters were planning how to secure a more tenable position. Yesterday, the results of an internal vote were announced, adding more Paul supporters to the Greens’ 18-member federal council, including Matthew Piggott, who worked on her leadership campaign, and candidate Clément Badra, who was recently promoted to Paul’s shadow cabinet for youth. An uphill climb remains for the fractured party in the election. But the results mean, for now, no more attempts to withhold her finances or hold a non-confidence vote. Maybe Paul sensed the good news when this photo was taken on Sunday. On the surface, at least, it’s all smiles from the Greens.