Another good night for Justin Trudeau

So the Liberals won Trinity-Spadina. So what? 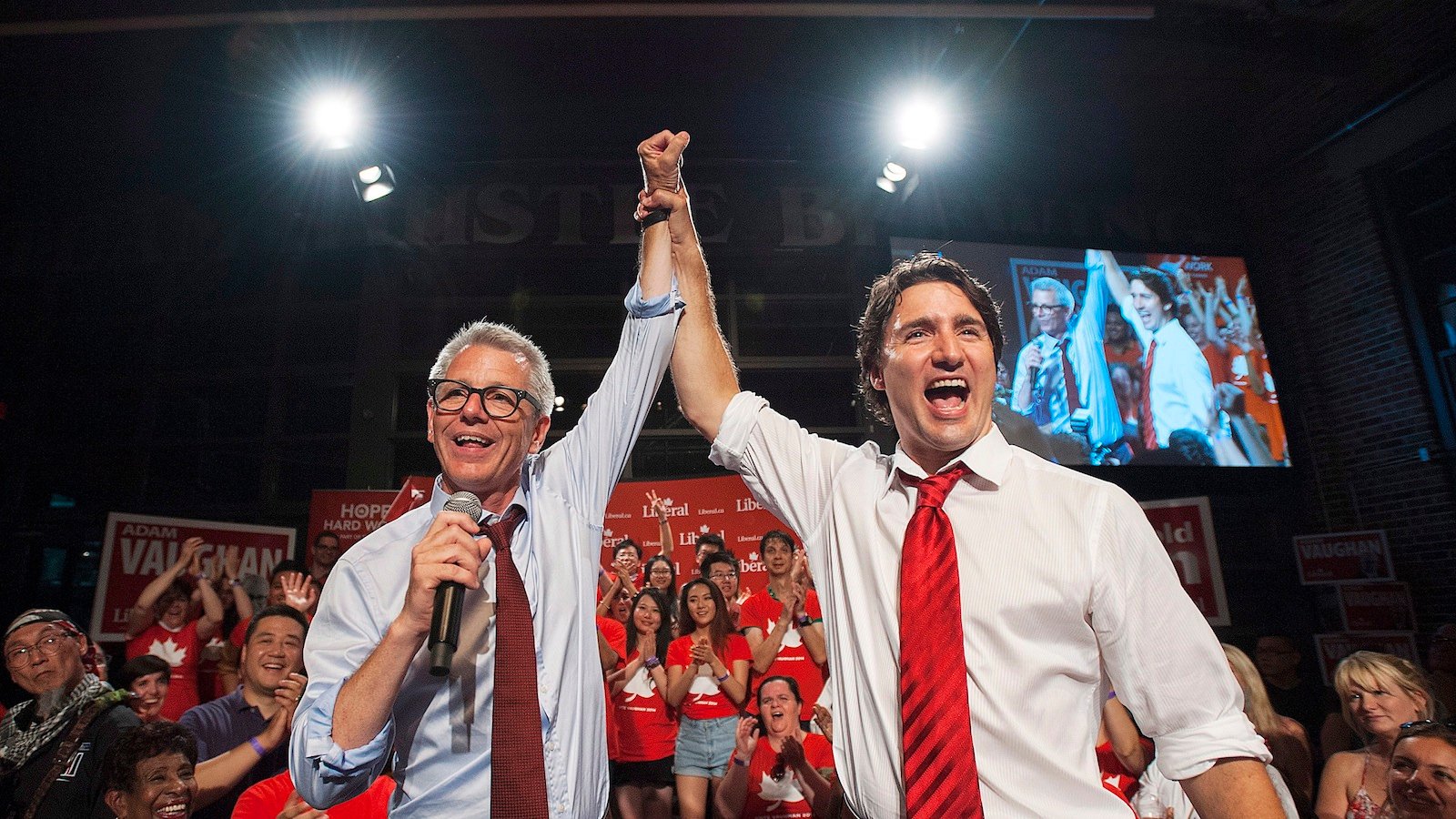 Each in a dress shirt and tie with rolled up sleeves and no jacket, Liberal Leader Justin Trudeau and newly minted MP Adam Vaughan, two sons of public men, stood on a stage in a converted locomotive roundhouse in downtown Toronto at the end of a sweltering day, a set of young Liberals arranged behind them, a crowd of happy Liberals before them, the candidate giddy, the leader exultant. What few voters could be found in the middle of an unofficial long weekend had broken decisively and decidedly to Vaughan. Trudeau, top button of his shirt undone, appropriately red tie around his neck, cheekbones glistening in the stage lights, was serious, but wound up, a victorious baby face fulfilled by the moment.

This Liberal victory in Trinity-Spadina might come to nothing. But for at least a night, it is something better than nothing.

Coupled with a win in Scarborough-Agincourt, the Liberal caucus now numbers 37 members, precisely three more than its number on May 3, 2011, the day after the worst electoral showing in the party’s history. And, for the second time in the 41st Parliament, after last year’s win in Labrador, the Liberals have won a seat they hadn’t claimed in 2011 (the other additional member of the caucus is Lise St. Denis, a New Democrat who wandered over to the Liberal corner eight months after her election in the NDP’s dramatic sweep of Quebec).

Scarborough-Agincourt has been with the Liberals since Brian Mulroney was prime minister, but Trinity-Spadina has been a minor bellwether—Liberal during years of Liberal government, New Democrat during years of Conservative government. And, in the most recent case, it had been the domain of Olivia Chow, the former first lady of the NDP and the current favourite to be the next mayor of Toronto. In 2011, she took it by 31 points. On Monday night, Vaughan took it by 19 points. Even with a dismal turnout, Vaughan still managed 3,000 more votes than the previous Liberal candidate.

The prelude to that involved an odd debate about oil, and a strong Liberal candidate and a strong New Democrat shadow-boxing the fight that Trudeau and NDP Leader Thomas Mulcair are having and will have to be the primary alternative to Stephen Harper. When the riding is carved up for 2015, Vaughan will slide to the southern portion—where he apparently did particularly well this time—while NDP candidate Joe Cressy will apparently go to the northern portion, where he’ll have to beat Chrystia Freeland, another Liberal star, who won a by-election last year.

For the purposes of qualifying the Trinity-Spadina result, it is probably worth considering the counter-factual. After Trudeau’s team rejected the application of Christine Innes, that previous candidate, he stood to be second-guessed if the Liberals failed to win here. Whatever would have been the reasons for that loss, it would have been too easy to wonder whether the fiasco of that rejection had hurt Liberal chances. (Even after Trudeau had pulled Vaughan out of his hat, there were new complaints about the probity of the nomination contest.) There is still a lawsuit to settle, but winning has a way of soothing almost all other partisan concerns.

In Vaughan, Trudeau found perhaps the best-positioned individual to win this riding—the son of a well-regarded politician and journalist, a celebrity two-term city councillor in his own right, whose former ward covers a good chunk of the federal riding and who won 75 per cent of the vote there in 2010. If Trudeau can find another 300 or so like Vaughan, Trudeau’s party should sweep the 2015 election.

Otherwise, what might be said about the meaning of Monday night? Other than launching Vaughan’s federal political career, the precise significance is debatable.

It is an imperfect measure, but you might imagine this as another mini-election. Across the four ridings contested—Trinity-Spadina, Macleod, Fort McMurray-Athabasca and Scarborough-Agincourt—the Liberals finished a distant third in 2011, taking just 20.9 per cent of the vote. Three years later, with a few stray polls still to report, the numbers suggest a resounding swing in favour of the red team.

That’s not everything, but it’s not nothing. It is, in fact, the third straight round of by-elections to see a Liberal bounce of some kind. In November 2012, a month after Trudeau announced his candidacy for the Liberal leadership, it was a bump of 3.5 points across three ridings. Last November, seven months after Trudeau was elected Liberal leader, it was a bump of 17.5 points across four ridings. (In between those nights was a win for the Liberals in Labrador.) On each of these nights, the Conservatives and New Democrats have suffered, while the Liberals have gained seats and managed strong second-place finishes in typically Conservative locales such as Calgary, Brandon and Fort McMurray.

So that’s something. But so what? A strong second place is, ultimately, worth exactly as much as a distant third, at least, unless it is a prelude to victory in 2015. And to improve the Liberal share of the vote is to surpass the low bar of that historically miserable showing in 2011. If the priest was on call to deliver last rites a few years ago, the patient is now up and walking around. But it still feels precarious. There are still 15 months between now and the real test of 2015. There is still a national campaign to be waged, a platform to be formulated, televised debates to survive and so many more television ads to be aired. There are still many ways this could go wrong for Trudeau; still so much to prove.

Still, a win in Trinity-Spadina beats the alternative. I heard a boxing coach say recently that he judged rounds on the basis of which fighter he would have rather been for those two or three minutes in the ring. You would have rather been Trudeau on Monday night—a victory over Mulcair in hand, another new star candidate by his side.

As the projection screen near the ceiling in the right corner of the room showed silent footage of Mulcair and Cressy conceding at a dance club on Toronto’s College Street—this was no doubt a less-than-splendid night for the NDP, but Liberals eager to make this the NDP’s Outremont are perhaps overextending themselves—the Liberals danced to thumping pop music and waved their arms above their heads. As Trudeau spoke, a knot of Liberal lieutenants beamed at the back of the room. Trudeau enthused about hope and hard work. And Vaughan, quieter, but still comfortable with this stuff, talked about how his father had believed that ideas could change the world. When the speeches were done, Trudeau bounced up and down to the music and clapped and called the audience to join in.

Even if he can still seem a bit less serious, he is still winning and he is another riding closer to forming government. Now he just needs to find another 150 or so more victories like this and he’ll really have something.