Bob McLeod says he is disappointed by Ottawa's "unilateral" move 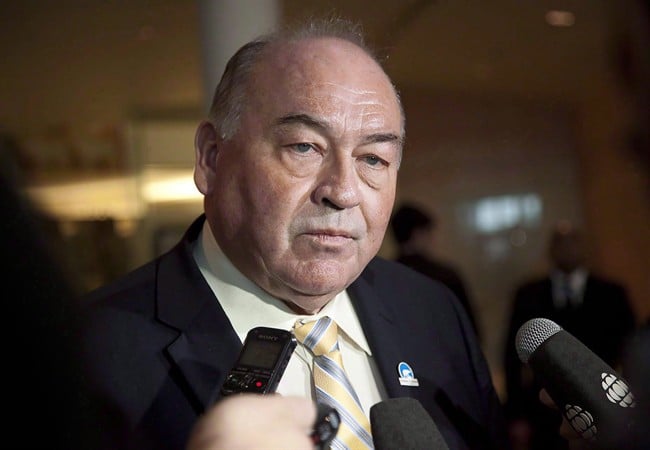 Northwest Territories Premier Bob McLeod talks to media after being picked as premier for a second term in Yellowknife, Northwest Territories, Wednesday, Dec.16, 2015. McLeod says a federal decision to stop issuing offshore oil and gas licences in the Arctic was made without consultation with the people whose economy stands to pay the price THE CANADIAN PRESS/Bill Braden

CALGARY – A federal decision to stop issuing offshore oil and gas licences in the Arctic was made without consultation with the people whose economy stands to pay the price, Northwest Territories Premier Bob McLeod said Wednesday.

The leader of the territory south of the oil-rich Beaufort Sea said he heard about the new policy just two hours before it was made public Tuesday in a joint statement by Prime Minister Justin Trudeau and U.S. President Barack Obama.

McLeod said he is disappointed by Ottawa’s “unilateral” move, which he said has set back recent initiatives by Ottawa to give Canada’s territories more autonomy.

“We need to have northerners making decisions about the North that affect them,” McLeod said in an interview.

“We live here, we want to protect the environment. … In order to appease opposition to resource development in the south, they’re looking at using the North to put in protected areas and stopping development.”

Trudeau defended the decision Wednesday while in Calgary, saying the measure represents a “historic” moment that will protect the Arctic for generations to come from a devastating oil spill under sea ice.

“We have been engaged in significant northern consultations over the past months,” he said.

“We have had Mary Simon (a special representative from Indigenous and Northern Affairs) and a number of top people engaged with consultations on economic development in the North.”

Trudeau said he called the territorial premiers and northern indigenous leaders “over the past few days” to tell them about the licence ban, which would be reviewed every five years, and explain federal commitments to invest in marine infrastructure while providing opportunities for fishing, science and other economic activities.

There is no drilling or production currently in Canada’s Arctic waters, nor is any planned in the near future, so the economic impact of the ban will be muted, he added.

But Cory Vanthuyne, chairman of the legislative economic development committee for the Northwest Territories, said the decision could impede new investment into the region’s economy.

“We want to make sure that when times do take a more positive turn that we’re doing the right things to indicate to investors that we’re the right place to come and put your dollars,” he said, pointing out that mining company Dominion Diamond recently decided to move its Yellowknife head office to Calgary.

Imperial Oil is also trying to sell its 11,000-barrel-a-day Norman Wells oilfield after nearly a century of operating in the Northwest Territories.

McLeod said the licensing ban cuts off the territory from a potential bounty of seven billion barrels of oil and 92 trillion cubic feet of natural gas. He said he will continue to press Trudeau for economic solutions during a promised meeting with him and other territorial premiers early next year.

Steven Rowe, a spokesman for the National Energy Board, said there hasn’t been any drilling in the Arctic offshore in the past 10 years.

He added, however, that several companies including Repsol, Chevron, Imperial Oil, Husky Oil, Suncor Energy and BP Canada have “significant discovery” licences, issued after drilling programs in the past found oil and gas pools.

He said those licences don’t have expiry dates and would in theory allow the company to re-enter the oilfield with a development drilling program.