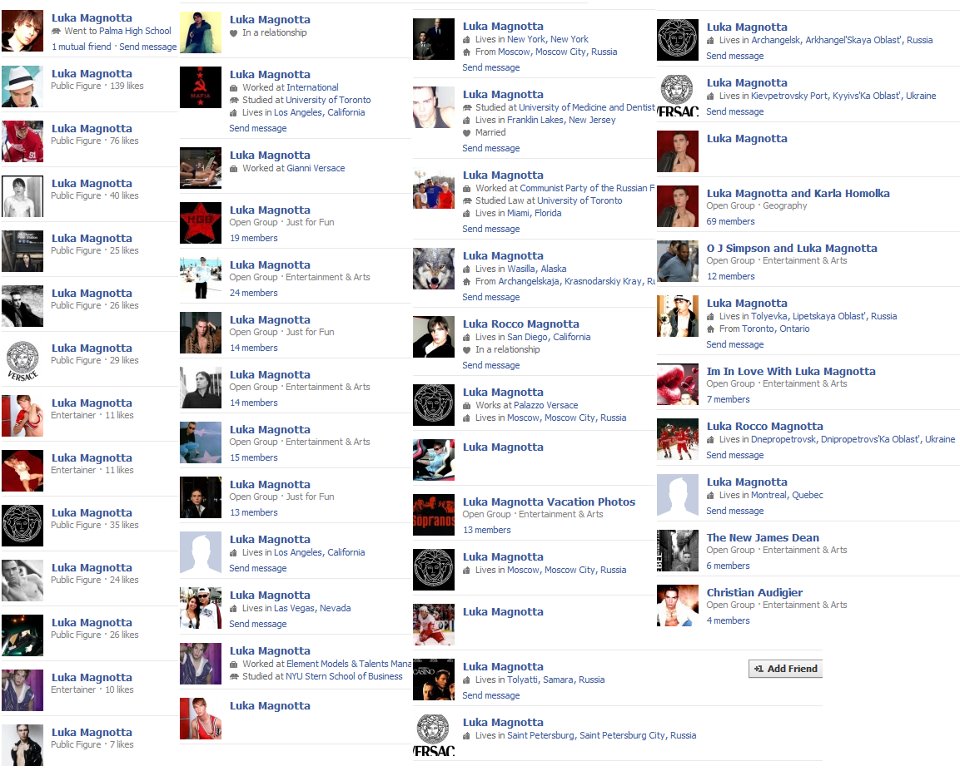 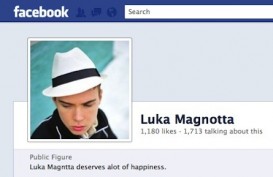 If you’ve ever accepted Facebook friend requests from people you don’t know personally, there’s a possibility you’ve been FB friends with accused cannibal killer Luka Magnotta in one of his many, many guises.

But the number of false identities Magnotta created online is far higher — in the hundreds and still counting — according to the group of animal lovers and digital detectives known as For Great Justice who first raised the alarm about Luka Magnotta when they accused him of making several kitten-killing videos in 2010 and 2011.

Some of the inventions linked to Magnotta were fanciful alternate versions of himself with different names, backgrounds and locales — but always featuring photos of Luka Magnotta. Far more were creations known as “sock puppets,” avatars with completely separate — but non-existent — identities that Magnotta is thought to have used to sing his own praises, attack his enemies and send up clouds of misinformation to disguise his online activities.

Some of these sock puppets had only one or two invented Facebook friends (enough to establish a minimal identity if they were playing a minor supporting role) while others had FB friends in the hundreds and thousands.

The latter were usually attached to fantasy lives built online and assembled before sending out mass befriending requests to real people linked to activities and interests — such as yachting or high-end sports cars — that the various personas craved to share.

That is how at least one of my Facebook friends ended up being friends with Luka Magnotta in one of his favourite guises, “Vladimir Romanov.”

I’ll tell you later what a few dozen — just some confirmed ones, not all by far — of Luka Magnotta’s many, many Facebook personas were.

Many of the identified Magnotta Facebook pages have been taken down, but they’re still there behind the digital curtain being examined by police. And many others have yet to be identified.

At least one of the “Vladimir Romanovs” still on Facebook is probably a Luka Magnotta invention. That one has more than 500 friends ranging from members of the European Parliament to wannabe aristocrats, some of whom also appear to be Magnotta fictive monsters.

(Not everyone who has the same name as a Luka Magnotta sock puppet Facebook account is fictional. If their accounts are still up on Facebook right now, chances are very good that they are real people–or, at least, not Magnotta creations.)

The sock puppets linked to Magnotta range in complexity and reach.

“Louise Rebecca Sanchez,” for example, described herself as “Just a mom, wife and caring individual all around.” Yet this caring Detroit mother and spouse had absolutely no pictures of her family on her almost-blank Facebook page, had zero communication with anyone in the Facebook universe and listed only one item under Activities & Interests — Luka Magnotta.

Her musical taste (like Magnotta’s) ran to Madonna, Britney Spears, Lady Gaga and Jayne Mansfield and her profile photo was a picture of Madonna. On Sept. 6, 2011, she shared a YouTube video of a 1960 Jayne Mansfield interview with one of Luka Magnotta’s Facebook pages.

“Louise Rebecca Sanchez” was a very simple, not very believable character, but she didn’t have to be more than a sketchy background player: Her main role was to make a supporting comment for a post by a more significant sock puppet, “Rebecca White,” on that same Luka Magnotta Facebook page.

“Rebecca White” was one of Magnotta’s strongest online supporters during the summer of 2011, a time when the For Great Justice animal activists were trying to get various police forces to take action against Magnotta.

“Rebecca White” first appeared, as far as I can tell, on July 4, 2011, when she added a long comment to a May 1 post by another sock puppet, “Anton Himmler,” attacking Magnotta’s accusers as “nothing more than bored teenagers and internet mischief makers” who “decided it would be funny to insert Magnotta into the situation, simply because he looks like the perp.”

In her July 4 comment, “Rebecca White” condemned the actions of the animal rights activists and decried the Toronto police being involved: “Why wouldn’t the Paris police or the Moscow police be involved since he lived in those citys (sic) after 2008?”

Magnotta was living in Toronto at that time, not Paris or Moscow — but you couldn’t tell that from his various Facebook pages which had him living everywhere from Los Angeles and Las Vegas to St. Petersburg and Samara Oblast, Russia.

“Rebecca White” had a very nice Facebook profile photo of a confident middle-aged society matron, but she was also one of those people who withholds all information about themselves on their Facebook pages.

The next day, July 5, “Rebecca White” was back on Magnotta’s Facebook page with a post of her own attacking the animal activists and linking to a YouTube video entitled “Don’t Talk to Police.”

On July 6, another sock puppet, “Adrian Valencia,” reposted a commentary he had first put on Magnotta’s FB page on June 20 branding the accusations against Magnotta as “unmitigated horse$hit.” That post got six likes — five of which were from confirmed Magnotta sock puppets. (The sixth was probably a sock puppet, as well, but I have not confirmed that identity yet.)

(“Adrian Valencia,” by the way, uses a movie poster of Disney’s The Little Mermaid as his profile photo. Magnotta used movie posters frequently as the photo identifier for his background Facebook characters.)

“Rebecca White” was back on the Luka Magnotta Facebook page again Aug. 1 with a warning that “stalking is dangerous, unhealthy and needs to be taken very seriously … I don’t think this guy had anything to do with that stupid video (of kittens being suffocated to death — more “horrible” than “stupid,” one might think) and you people are the onse (sic) who are sick.”

That posting attracted six comments before Facebook took down the page — five outraged citizens venting after Magnotta was identified as the Montreal dismemberment murder suspect on May 30, but only one from before.

That one comment was the role minor sock puppet “Louise Rebecca Sanchez” of Detroit was born to play — remember her, the “caring mom” who didn’t plaster photos of her kids all over her Facebook page, the loving wife whose only interest and activity was Luka Magnotta? On Sept. 6, “Louise Rebecca Sanchez” added the following ambivalent comment to the Aug. 1 posting of “Rebecca White”: “I agree people shouldn’t stalk him but I hate him.” If Magnotta was himself writing those words, they exhibit a strong degree of self-loathing.

“Joey Alexis Lui” was apparently born in Shanghai but the names and identities of his supposed relatives would suggest a much stronger tie to the Philippines or Mexico than to China.

“Joey Alexis Lui” said he lived in Miami but “will work at Canadian sociaty (sic) wrestling starting in Sep 2013.” “Joey Alexis Lui” was a huge wrestling fan, specifically the Lucha Libre style of masked, high-flying wrestling developed in Mexico. Not surprisingly, all of his 609 Facebook friends are also Lucha Libre fans. It’s almost as if he mass-mailed the entire membership of a Facebook Lucha Libre group page. And was accepted. “Joey Alexis Lui” never, ever had a single Internet conversation with a single one of his new “friends.” But he was there–connected.

And those are just a few of the sock puppets (with their own Facebook pages) thought to be created by Luka Magnotta since he joined Facebook on May 16, 2009.

If he created false trails and tried to make himself appear to be rich, successful, cultured and well-travelled, Magnotta also used his Facebook creations to reinforce a compulsive campaign to link himself with schoolgirl killer Karla Homolka.

Part of this delusional campaign (which also involved repeated attempts to alter Homolka’s Wikipedia entry to list Luka Magnotta as her husband) was the creation of a false Facebook page in the name “Logan Valentini” using a photo of Karla Homolka’s sister, Lori.

Among this “Logan Valentini”‘s small circle of Facebook friends was one incarnation of “Vladimir Romanov” with photos of Magnotta.

Another fabricated friend on the “Logan Valentini” page was one “Kriss Bordelais” who was supposedly employed by the Manganao Hotel-Club (a real resort) on the island of Guadeloupe in the French Antilles. When Homolka left Canada in 2007 with her husband, Thierry Bordelais (brother of Homolka’s lawyer) and their young son, their destination was “the French Antilles,” home of the Bordelais family.

For good measure a few other real people were befriended by “Logan Valentini,” including one completely unsuspecting middle-aged man with the last name of Magnotta. He was probably baffled why an attractive blonde woman named “Logan Valentini” wanted to be his Facebook friend, even though she apparently had no interaction with the handful of people who were already her FB friends.

But Mr. Magnotta did his part by accepting the friend request: Anyone who Googled “Magnotta” and “Bordelais” would find the “Logan Valentini” Facebook page — and probably recognize the Lori Homolka profile photo and the Luka Magnotta photos on the “Vladimir Romanov” page. Putting two and two together, the logical conclusion would be that Luka Magnotta was part of the Homolka inner circle, even though they were trying to disguise the relationship. Many people came to that entirely false conclusion.

That Facebook page has been taken down now, but another “Logan Valentini” still exists — “Logan Bathier Valentini” of Staten Island, New York. That young man is almost certainly another Magnotta fiction, one which was never used, as far as I can tell. This young New Yorker has no Facebook friends, conducts zero Facebook activity, and has a photo of a dog as the main picture across the top of his page. He’s not a real person, just a vague shadow of a Facebook ghost.

His photo was also on group Facebook pages with names like “The New James Dean,” “Luka Magnotta and Karla Homolka,” “OJ Simpson and Luka Magnotta” and “Im (sic) In Love With Luka Magnotta.”

Based on my research and two years of detective work by the For Great Justice animal rights group, here are some — just some — of the many fictitious Facebook sock-puppet identities Magnotta is thought to have created:

And we haven’t touched on his activity on MySpace and other social networks.

But perhaps Luka Magnotta’s scariest social networking presence is on vKontakt.ru — the Russian equivalent of Facebook — which is still online.

The page was created May 12, 2011. On Jan. 18, 2012, a post appeared with a link to luka-magnotta.com along with an album of 27 photos — 25 solo shots of Magnotta, one a Photoshopped image that appears to place Magnotta and Karla Homolka in a hot tub, and a photo of a Toronto Sun front page during the 1995 Paul Bernardo murder trial with a headline based on Homolka testimony: “Paul strangled them…” 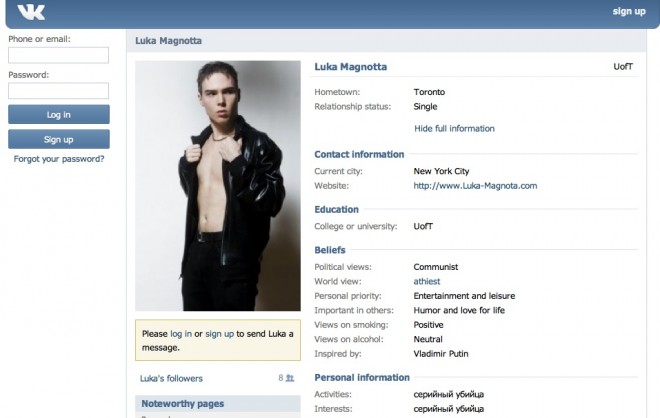 If you open the full information on the VK page, it suggests Magnotta’s current city is New York City, his political views are Communist and “humor and love for life” are important in others.

Then, under Personal Information — activities, interests, favorite music and so on —the same phrase appears over and over and over in Russian Cyrillic script: