As Nunavut turns 20, Inuit rethink their own governance

Nunavut's progress has been marred by missed deadlines and slow starts caused by unproductive discussions, backsliding and funding disputes. What can be done? 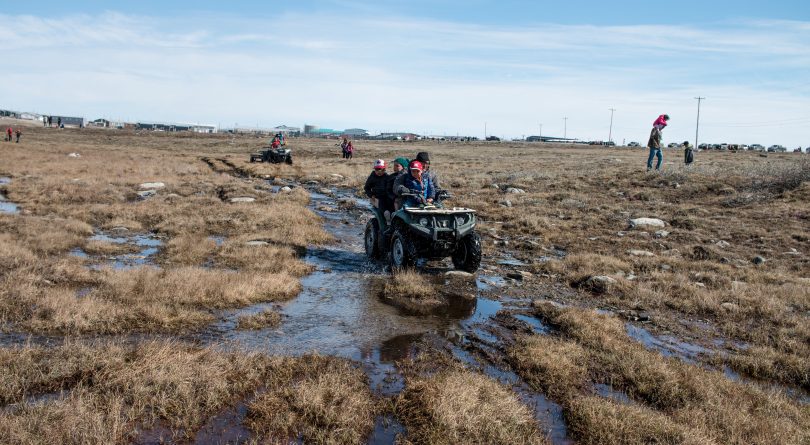 Children ride on an ATV with an elder just outside of Rankin Inlet on Canada Day 2018. (Cody Punter)

It was around midnight on Dec. 15, 1991, when a tray of chicken salad sandwiches arrived at the boardroom on Parliament Hill. Around the U-shaped table, Inuit leaders and federal and territorial government officials were on hour 15 of their 80th day of hammering out plans that would result in the formation of Nunavut. “We were all frayed and nerves were jumpy,” recalls Malachi Arreak, an Inuit negotiator who was then in his 20s. “Inuit were starting to show their warrior side toward government, something we had never done previously. That comes out in life-and-death situations, where survival is the only priority.”

On one side of the table was Tom Siddon, then minister of Indian affairs and northern development, and federal civil servants; on the other, Inuit elders and negotiators, along with officials from the Northwest Territories. The breakthrough came at around 12:40 a.m., when all parties agreed to the timing for a new eastern Arctic territory and to work on a political accord for a Nunavut government. Cheers erupted and everyone stood and shook hands, says Arreak—some more vigorously than others.

“It was like seeing the camp after you’ve been in the woods hunting for a week,” says the 54-year-old from his home in Pond Inlet in northern Baffin Island. “It was like constant, non-stop work. You’re carrying all this meat, but then you see the camp and you no longer feel tired. You feel rejuvenated.”

April 1, 2019, will mark the 20th anniversary of Nunavut being added to the map of Canada. That triumphant moment came six years after the Nunavut Land Claims Agreement received royal assent, fulfilling a long-time dream for the Inuit of the eastern Arctic by recognizing their land rights, granting political control and setting the road map for the formation of a new territorial government.

But over the past two decades, the initial euphoria among Inuit for Nunavut has faded. Many aspects of the ambitious project remain unfulfilled, leading many Inuit, who make up 85 per cent of the population, to doubt they can still realize their aspirations through the territorial public government.

Nunavut Tunngavik Inc. (NTI), an organization responsible for ensuring the other levels of government fulfill promises made under the 1993 settlement, is now considering an alternative path. In October, its board passed a resolution to explore potential models for Inuit self-government. “We’re being reflective: what are ways in which we can ensure Inuit needs and points of view are being looked at and engaged in, not in a superficial way?” says Aluki Kotierk, the president of NTI. “Is there a better way in which we can serve Inuit? If the territorial public government isn’t meeting the needs of Inuit, is there another way in which we can do that?”

At the centre of their concerns: employment, language and education. The historic agreement stipulates that the majority of government employees be Inuit, but Kotierk says that’s still not the case. “It’s been stagnant at 50 per cent, and the vast majority of Inuit who are employed are in administrative-level positions.” The agreement, if fully implemented, was supposed to ensure Inuit “would be in control and in a position to influence how programs and services would develop for Inuit,” she says.

Issues around language rights have added to the sense of powerlessness. Inuktitut is the mother tongue of 70 per cent of Nunavut’s population, but it’s been slowly declining, with each census showing English being used in more Nunavummiut homes. Most teachers in Nunavut’s schools do not speak Inuktitut, and last year, the territorial government proposed a controversial bill that would have delayed rolling out Inuktitut instruction to 2030. It failed, but raised anxiety among Inuit for the survival of their language and culture. “Children should be able to go to school and learn in their language from materials that are relevant to their lives,” says Kotierk. “At this point, that’s not happening.”

RELATED: Nunavut is growing faster than any other province or territory

There are some signs of change. A record-high 93 students—many of them Inuit—are enrolled in a Nunavut teacher training college, with 23 expected to graduate this year. But Kotierk says this still doesn’t meet the need, while the broader task of implementing all 42 articles of the Nunavut Land Claims Agreement has been aptly characterized by former Nunavut commissioner Ann Meekitjuk Hanson as being “as daunting as the opportunities have been promising.”

Over the years, independent reviews of the project have described a pattern of missed deadlines and slow starts caused by unproductive discussions, backsliding, funding disputes and lack of monitoring. Things came to a head in December 2006, when NTI filed a lawsuit seeking $1 billion in damages for alleged breach of contract by the federal government and claiming Ottawa keeps the Inuit dependent in a state of financial and emotional despair. Then, in May 2015, progress. An out-of-court settlement set $50 million aside for Inuit job training and re-emphasized the spirit of the original agreement. Yet several years in, says Kotierk, there is still no employment plan.

Nunavut’s historic land claims agreement exchanges title to the land for Inuit rights and benefits, including ownership of 18 per cent of the land—350,000 sq. km—in Nunavut; mineral rights to two per cent of those lands; more than $1.173 billion over 14 years; and the creation of the territory, which changed the map of Canada for the first time in 50 years.

Its intention was to protect the Inuit rights to fish, hunt and trap while ensuring more jobs and training. Inuit would benefit from opportunities in oil, gas and mining, and have guaranteed participation in making decisions on managing land and resources.

Some pieces of the plan have come to pass, but they’ve been overshadowed by social challenges facing the young territory. Many Inuit believe they are at a crisis point. Alcohol and substance abuse persists; crime, family violence and suicide rates are above the national average. Arson is a serious problem—recently, a fire burned part of the largest supermarket in the capital, Iqaluit. (A 17-year-old was charged.)

Nunavut has the highest infant mortality rate in Canada—17.7 per 1,000 live births, compared to the Canadian average of 4.7, according to a recent report. Yet its population grows faster than any province or territory—12.7 per cent between 2011 and 2016, and 40 per cent since the territory formed 20 years ago.

The expansion has caused growing pains and exposed poor planning, not least a looming water shortage in Iqaluit. And the problems might seem less pressing if chaos hadn’t lately reigned at the territorial legislature, with premiers and ministers constantly coming and going. In June, Nunavut Premier Paul Quassa was ousted as leader in a historic non-confidence vote. In October, MLA Pat Angnakak resigned from cabinet after she was stripped of her duties as minister responsible for housing and the energy corporation.

To be sure, the territory has also had successes. A deep-sea port in Iqaluit sought for decades is now finally under construction, and a new, $300-million airport terminal in the capital eight times larger than the previous one opened in 2017. Inuit culture and arts, meanwhile, have never been more revered, with internationally renowned artists’ work now on display as part of a Nunavut fine art collection at the Winnipeg Art Gallery. Some 3,000 Nunavut residents now earn some income from arts sales, contributing $33 million annually to the territory’s economy.

Whether a self-governing Inuit territory could fulfill the political aspirations of Nunavut, and how that might work, remain open questions (Kotierk hopes to report back in October on her people’s options.) So does the level of support among Inuit for going their own way—though frustration among elders and leaders is easy to find. Arreak, for one, laments the lost time and lack of political commitment to following through on the land claims agreement. “It’s becoming a tit-for-tat between Inuit and the government, which is not what the negotiators wanted,” he says. “If we had done what we as the negotiators wanted to implement, it would be a 180-degree difference from where it’s going now.”

These days, Arreak visits schools to tell children the story of the land claims agreement, urging them to pursue the opportunities he believes the territorial model could provide. Kotierk, too, says the unfulfilled promise of the Nunavut project should not take away from the “great feat” that led to it. “It was Inuit who changed the map of Canada, all in a peaceful manner,” she says. “When you look at how maps are changed around the world, it often involves war or civil strife. Yet we were able to do that within Canada with no war. It’s important that we remember that—particularly that it was young Inuit that got together to have this big dream.”