Is anyone in Canada really ready for the Motoring Enthusiast Party? 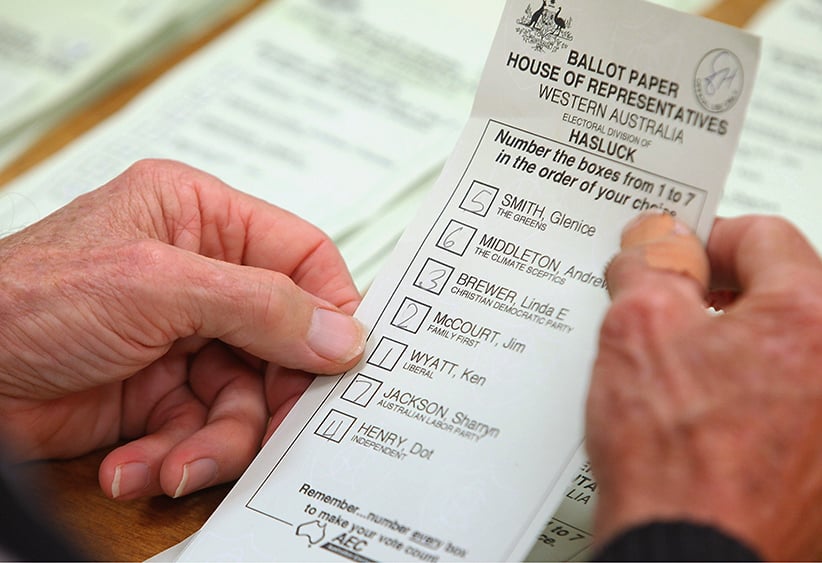 Canada may have beaten Australia out of the starting gate with Confederation in 1867; it wasn’t until 1901 that our colonial cousin managed the same feat. But there’s still much we can learn from our younger Antipodean relation—particularly when it comes to electoral reform. There’s no reason for us to make the same mistakes they’ve made.

The 76 members of the Australian Senate are elected using a preferential, or ranked, ballot. Such a system is much in fashion. Here in Canada, Prime Minister Justin Trudeau has famously vowed that 2015’s federal election will be the last carried out using our traditional first-past-the-post method. Of the many possible replacement options, it’s widely speculated Trudeau favours ranked ballots because it ensures every vote counts. The Liberals have also said they don’t believe this sort of change requires public approval via referendum, arguing a political agreement should be sufficient.

So are we ready for MPs from the Canadian Motoring Enthusiast Party?

Electing the Australian Senate—an upper house with considerably more prestige and power than in Canada—is a time-consuming and complex task. Every three years, voters must choose six senators per state using a ballot the size of a dinner placemat. In New South Wales, for example, the most recent Senate election included 110 individual candidates. Voters are required to express their preferences on all of them. This can be done by either labouriously ranking each candidate from No. 1 to No. 110, or by voting once for a preferred party. In this latter option, used by more than 95 per cent of all voters because of its simplicity, the party itself takes care of the ranking procedure through what’s called a “group ticket,” with its own candidates at the top. Once the votes are cast, the candidate with the fewest votes is eliminated and the group ticket dictates how those votes are to be distributed among the remaining candidates (through a mysterious and complicated process that space precludes us from explaining here). This process continues until six winners per state are declared.

In recent elections, a legion of micro-parties, often with provocative names and platforms such as the Sex Party, Sports Party or No Carbon Tax Climate Skeptics Party, have turned group tickets into a political lottery. By carefully allocating their preferences amongst themselves for maximum effect, it is possible for these micro-parties to send at least one of their kind to the upper house. This is what happened in the 2013 election, when the Australian Motoring Enthusiast Party elected its first senator, Ricky Muir. He received just 0.5 per cent of the popular vote, but thanks to the combined preferences of 22 other obscure parties, he now has a seat in Canberra.

Given the Byzantine nature of preferential ballots and group tickets, many Australian voters have no idea how their preferences are allocated. Many votes ultimately go to parties entirely contrary to the original voter’s political beliefs. For example, among the parties that threw their weight behind Muir were the Animal Justice Party and the Bullet Train for Australia Party, neither of which seems aligned with the “motoring enthusiasts lifestyle” advocated by Muir. In this way, ranked ballots represent a complete perversion of the democratic process.

The absurdity of Australia’s preferential ballot system has the government of Malcolm Turnbull pushing for reform. This week the conservative-minded prime minister proposed an end to the group ticket, plus other changes designed to make elections tougher on micro-parties. And he has the support of the opposition Australian Greens. “You know the system is broken when someone polls 0.5 per cent at an election and returns one candidate,” said Green Leader Richard di Natale. “It’s been gamed by these backroom preference dealers.” The larger opposition Labor Party is split on the proposal.

The final implications of Turnbull’s reform package are uncertain, as it could trigger a snap election and an entirely new Senate. For Canadians, the mess created by preference brokers and micro-parties should be considered a cautionary tale on electoral reform at home. Crass manipulation of ranked ballots through group tickets was never an objective of Australia’s “progressive” electoral system. But it became the logical outcome, given the presence of opportunistic politicians. Why should such a scenario hold any attraction for Canada? The Trudeau government’s plan to cobble together a backroom political deal on electoral reform could unleash similar unpleasant and unintended consequences. And with voter turnout rising dramatically in the last federal election—including a surprising 12 percentage point boost among young voters—there’s no evidence our voting system is broken, or in need of wholesale replacement.

Finally and most important, it remains essential that Canadian voters themselves have the final say on any plan to recast the foundation of Canada’s democracy. A referendum is a necessary defence against political manipulation of our electoral system.