If James Comey had not been fired, Bannon told 60 Minutes, 'We would not have the Robert Mueller investigation.' 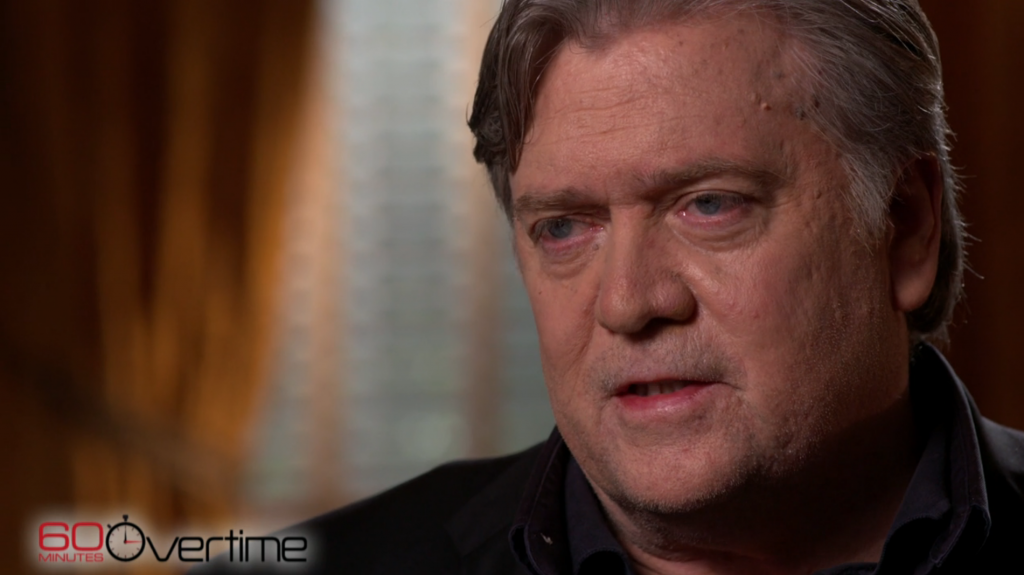 Donald Trump’s ex-strategist and campaign manager insisted he will continue to support the president’s agenda against the pro-trade, pro-globalization Republican establishment they both deeply disdain.

But Steve Bannon made clear his view that Trump set in motion a damaging chain-reaction by firing the former FBI director this spring. He offered a no comment when asked whether the firing was supported by one of his political nemeses: Trump son-in-law Jared Kushner.

“The media has reported I was adamantly opposed to that,” Bannon told a “60 Minutes” interview, in an exchange left out of Sunday’s broadcast.

When asked about media reports that Bannon supposedly viewed the firing as the biggest mistake in political history, he at first called that slightly bombastic, then added a caveat: “Maybe modern political history.”

The tumult caused by the FBI director’s firing prompted Justice Department officials to name a special investigator. The investigator, Mueller, is now reportedly examining a range of alleged incidents including obstruction of justice and money-laundering, and numerous White House staff and presidential associates have hired lawyers.

Bannon was asked whether he agreed with some Trump allies who want to try firing Mueller. He said: “No, I do not.” When asked about media reports that Kushner pushed for Comey’s firing, he said: “You will have to find that out either through the media or through the investigation.”

Kushner is among the numerous rivals he clashed with in the White House.

In the “60 Minutes” interview, he sought to settle scores with a few of them. He suggested economic adviser and Democrat Gary Cohn should resign, rather than complaining publicly about the way Trump handled the racial incident in Charlottesville.

He also accused the Republican party leadership of trying to block Trump’s agenda.

The congressional wing of the party is more supportive of trade deals like NAFTA, more favourable to immigration, and less supportive of funding a wall with Mexico, than Trump is.

“The Republican establishment is trying to nullify the 2016 election,” Bannon told the interviewer Charlie Rose.

“That’s a brutal fact we have to face… I think (Senate Leader) Mitch McConnell, and to a degree, (House Leader) Paul Ryan, they do not want Donald Trump’s populist, economic nationalist agenda to be implemented. It’s very obvious.”

He suggested a current split over undocumented children could rip the party apart. He predicted a nationalist, populist movement will prevail in American politics – but it’s not yet clear whether it will be of a left-wing or right-wing variety.

Bannon said that depends on whether Republicans or Democrats take up the cause of trade-skepticism.