As the Obamas say goodbye, they're busier on the campaign trail than Hillary Clinton 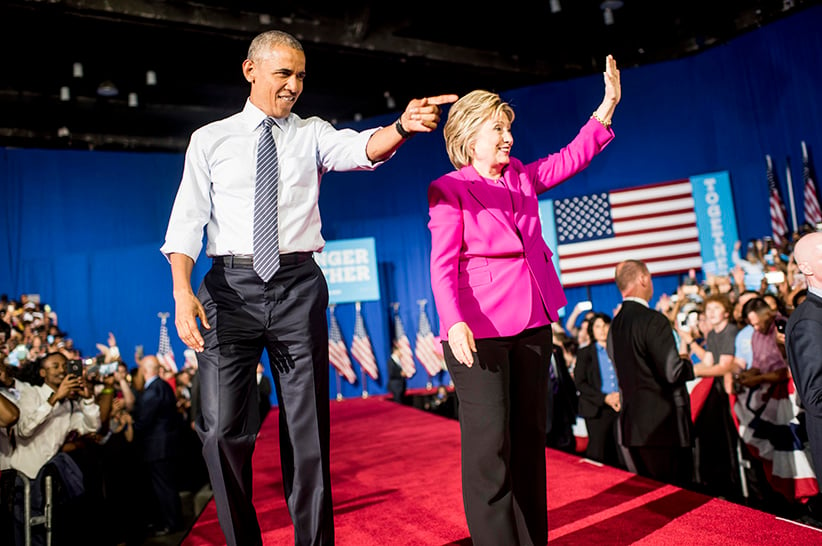 The last days of POTUS and FLOTUS are playing out in a flagrantly partisan pas-de-deux in support of the woman they once demeaned and defeated, then redeemed to be their successor. A whiplashed electorate finds Barack and Michelle Obama almost everywhere this autumn, lauding Hillary Clinton, careering through the climactic weeks of the most execrable political campaign in American history on a final crusade of voter arousal, racial appeal and unabashed self-praise.

Appearing where they already are adored, avoiding the back streets of Trumpville, the Obamas are the Tragically Hip without the heart-wrenching tragedy; the Who making a career of goodbyes.

In less than three weeks, when Clinton will begin her move back to her old Pennsylvania Avenue address—or, when Trump, his wife Melania and little Barron Trump will be forced to lower themselves from a Central Park penthouse to a 220-year-old shack—the Obamas will be reduced to mere obstacles, packing their trunks and tipping the servants, awaiting a move-out date of Jan. 20, 2017.

“We’re already looking around making sure we haven’t broken any china or messed anything up,” the President says. 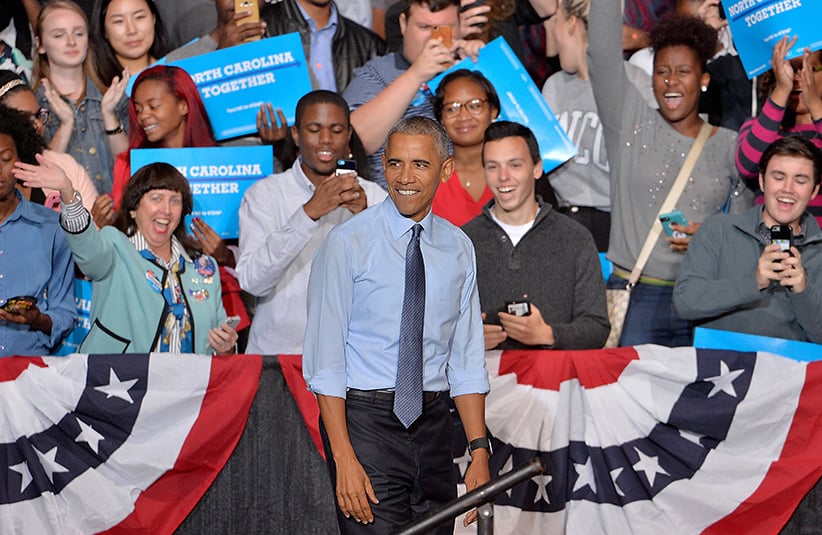 The latest polls show Clinton on the cusp of a landslide, but the formality of an election remains to be conducted. So, at a sun-kissed amphitheatre in Greensboro, N.C., here is POTUS—the President of the United States, who is leaving the Oval Office with his approval rating cresting at 50 per cent, which is a healthy 10 times the unemployment rate.

Obama is about to take the stage to defame Trump with dripping sarcasm and uncontained delight—“The guy says stuff nobody would find tolerable if they were applying for a job at 7-Eleven”—and to recommend as his successor the woman of whom he said during the 2008 Democratic primary campaign, “While I was working on those streets watching those folks see their jobs shift overseas, you were a corporate lawyer sitting on the board at Wal-Mart.”

(“The sky will open, the light will come down, celestial choirs will be singing . . . and the world would be perfect,” Clinton retorted, way back then. “Maybe I’ve just lived a little long, but I have no illusions about how hard this will be. You are not going to wave a magic wand.” But that unlovely history is invisible now, obscured by conspicuous displays of bonhomie and sisterhood wherever the first family travels.)

In Greensboro, where, in 1960, four courageous African-American freshmen from the North Carolina Agricultural and Technical University demanded the right to be seated at the whites-only lunch counter of Woolworth’s five-and-ten-cent store, the vast majority of the President’s audience is black. But when a young woman from A&T steps on stage to recite the Pledge of Allegiance in advance of the President’s speech, about one-third of the members of the Blue & Gold Marching Machine band from the “historically black” institution stage a sit-in of their own on the grass, and when she comes to the concluding line about “liberty and justice for all,” many of them can be heard to mutter, “not for all, ain’t no justice.”

This, too, is the America that Barack Obama is leaving behind, but he has not come to Carolina to nickel-and-dime his own accomplishments. “Incomes are rising. Poverty is falling. Uninsured rate at an all-time low,” he boasts, and he affirms that Clinton is the only person who can sustain this ledger of success, even though she had little or nothing to do with economic affairs during her time as secretary of state.

“If you want a leader who actually values hard work and values working Americans; if you want higher wages and better benefits and a fairer tax code, and equal pay for equal work for women, and stronger regulations on Wall Street—then you’ve got to vote for Hillary,” the President proclaims. 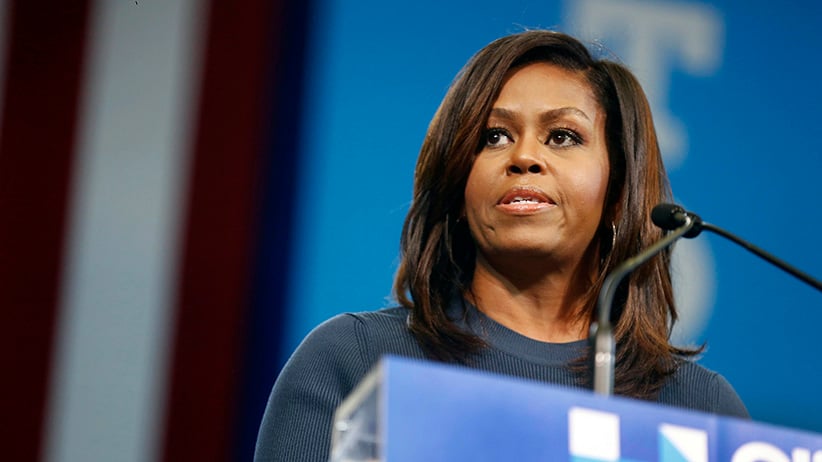 Two days later, in Manchester, N.H., there is FLOTUS, the first lady of the United States, who has spent the past eight years lobbying on behalf of students, spinach and sit-ups, rising at a college auditorium in praise of the woman of whom she once snarled, “If you can’t run your own house, you certainly can’t run the White House.”

(Left at home in Washington are the two teenaged daughters whom the Obamas have steered through eight full years in fame’s cruel crucible without a hint of scandal or impropriety—perhaps their most extraordinary accomplishment of all.)

The President, who began his quest in 2008 while conspicuously not wearing an American flag pin in his lapel, and the first lady, who famously and unguardedly said of her husband’s ascent, “For the first time in my adult life, I am really proud of my country,” are not the only distinguished surrogates whom Clinton—and her campaign’s bottomless treasury—have sent into the field.

In Colorado this week, senators Bernie Sanders and Elizabeth Warren, the ageless idols of the underaged Left, have been appearing together as a censorious tag team. Vice-President Joe Biden has been crossing the country, telling anyone who will listen that Trump’s “idea that ‘she lets me do anything because I’m a celebrity’ is just sick.”

In Manchester now, her voice quavering, her eyes moist, the audience hushed and gasping, the first lady delivers an address of exquisite passion and plangent pain.

“The fact is,” she says, “that in this election, we have a candidate for president of the United States who, over the course of his lifetime and the course of this campaign, has said things about women that are so shocking, so demeaning that I simply will not repeat anything here today. Last week, we saw this candidate actually bragging about sexually assaulting women. I can’t believe that I’m saying that a candidate for president of the United States has bragged about sexually assaulting women.

“I have to tell you that I can’t stop thinking about this. It has shaken me to my core in a way that I couldn’t have predicted. So while I’d love nothing more than to pretend like this isn’t happening, and to come out here and do my normal campaign speech, it would be dishonest and disingenuous to me to just move on to the next thing like this was all just a bad dream.

“It is cruel. It’s frightening. And the truth is: it hurts. It hurts.”

Two days later, Michelle Obama enters the gold-trimmed East Room of the White House in a knee-length salt-and-pepper dress. The first lady has come to speak in praise of the 20th-century masterpieces of the visual and decorative arts that have been put on display during the Obamas’ eight-year custodianship—the Rothko and the Bellows and the Rauschenberg, the Art Deco tea service in the Old Family Dining Room—shutting out, for a moment, the slander and the race-baiting of a dark and disturbing campaign.

It is the customary role of the presidential spouse, soon to be filled either by a Slovenian beauty or by an (ex-)president himself, a man whose full-length likeness already hangs in the entrance hall of the executive mansion, facing the formal portrait of George W. Bush. In this way, in a democracy, the generations come and go; in this way, Michelle Obama can speak of Dolley Madison saving a portrait of George Washington from British torches in 1814, of “Lincoln pacing these halls while saving our nation.”

For the Obamas, the valediction on the stump is passionate and political; at home, it is personal and blue. The tenants on the second floor are at the end of their lease.

“After all,” says FLOTUS, “we’re moving out soon, and we’ve got to get our security deposit back.”