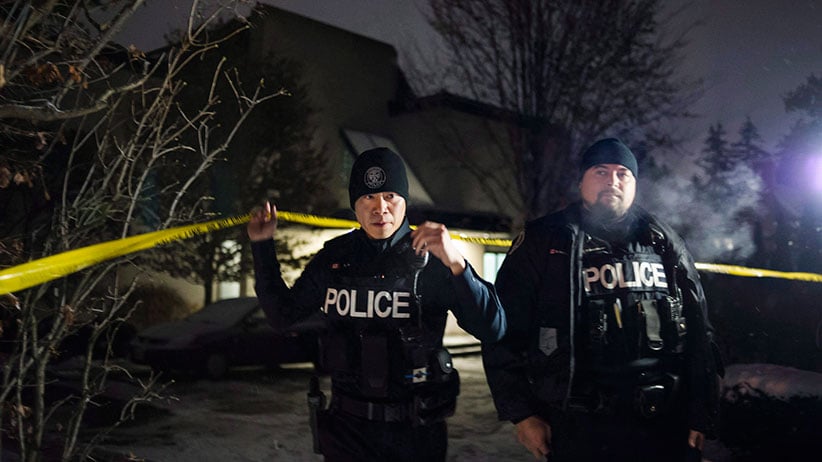 Police secured the home of Apotex founder Barry Sherman and wife, Honey Sherman after they were found dead on Dec. 15 (Christopher Katsarov/CP)

The federal lobbying commissioner says she will soon decide—by Feb. 2, at the latest—whether to continue her office’s high-profile investigation into Apotex founder Barry Sherman, the pharmaceutical billionaire who was discovered dead five weeks ago alongside his wife Honey.

The chairman of Canada’s largest drug firm, Sherman was the target of Ottawa’s lobbying watchdog in the months before he died because of an exclusive Liberal fundraiser he hosted in August 2015—featuring soon-to-be Prime Minister Justin Trudeau as the guest of honour. The Lobbyists’ Code of Conduct prohibits registered lobbyists (which Sherman was at the time, as chair of his company) from placing elected officials in a potential conflict of interest that could make them feel “a sense of obligation.”

Sherman promptly fought back, filing a Federal Court challenge last May in hope of quashing the investigation before it even finished. The case marked a first: never had someone gone to court to try to derail an active probe by the lobbying commissioner.

After the Shermans’ bodies were discovered on Dec. 15, outgoing commissioner Karen Shepherd said she was “assessing” the fate of her investigation; a spokeswoman for the new lobbying commissioner, Nancy Bélanger, reiterated that message when contacted last week by Maclean’s. In the meantime, the court challenge inched ahead. Lawyers for both sides filed fresh written arguments on Dec. 29—the same day, by chance, that Rideau Hall announced Sherman’s posthumous appointment to the Order of Canada—and a hearing was scheduled for Feb. 8 in Ottawa.

But this week, both sides agreed to pause the well-publicized court action while the commissioner contemplates the most obvious question: Should her office even bother with the investigation now that Sherman is dead? According to the court’s written order, rendered Wednesday, Bélanger has agreed to answer that question by Feb. 2. “In light of Dr. Sherman’s death the newly appointed Commissioner of Lobbying is considering what steps to take with respect to the investigation that is the subject of the within proceeding,” the order reads. “The mutual intent of the parties [is] simply to give the Commissioner further time to consider her position in respect of the investigation.”

The lobbying saga dates back to October 2016, when the advocacy group Democracy Watch filed a formal complaint against Sherman in connection with a cash-for-access fundraiser featuring Finance Minister Bill Morneau. Sherman was among those reportedly selling $500 tickets to the event, scheduled for Nov. 7, 2016.

A few days before the fundraiser, an investigator from the commissioner’s office visited Apotex headquarters in Toronto, where Sherman agreed to a tape-recorded interview. During the conversation, he openly discussed the other fundraiser held at his house on August 26, 2015, which featured then-Liberal candidate Michael Levitt, now an MP, along with Trudeau. Sherman said his wife Honey organized the logistics, that the guest list was somewhere between 100 and 150 people and that he believed the proceeds were split between the Liberal Party of Canada and Levitt’s electoral district association. A ticket reportedly cost $1,500.

The day after the interview, Democracy Watch filed a second complaint, this one alleging Sherman breached the lobbyists’ code when he hosted his 2015 fundraiser. Although an administrative review found insufficient evidence to support the first complaint, the commissioner’s director of investigations, Phil McIntosh, did conclude there was reason to believe Sherman’s at-home fundraiser created “a sense of obligation on the part of one or more public office holders.” He recommended last January that Shepherd commence a full investigation. She agreed.

RELATED: Liberals detail measures to ensure no conflict at fundraisers

A few months later, the commissioner issued subpoenas against two senior Apotex officials: president and CEO Jeremy Desai, and Elie Betito, a former director of government relations who was among the guests at the 2015 fundraiser. That’s when lawyers for Sherman and Apotex turned to Federal Court, decrying the ongoing investigation as “an unanchored fishing expedition” launched in “bad faith.” Faced with mounting legal bills, Shepherd was eventually forced to request $400,000 from a parliamentary committee or risk conceding defeat.

For the chairman of Apotex, the stakes were undoubtedly high. Although a breach of the lobbying code does not carry fines or jail time, it does trigger a public rebuke in a report to Parliament. And because a person who campaigns or fundraises for a political party is barred from lobbying that same party for five years, Sherman faced the possibility of being stripped of his status on the lobbyist registry until at least 2020. It’s not clear whether the commissioner’s investigation, if it continues, could result in wider sanctions against Apotex and or the company’s other lobbyists. Again, the fall-out would be considerable. Apotex representatives are active lobbyists on the Hill,  which isn’t surprising. The generic drug company can benefit from—or be penalized by—government decisions and regulatory changes pertaining to drug patents and approvals.

Jordan Berman, an Apotex spokesman, declined to comment on the court challenge or the investigation. “At this point we have nothing further to say about this matter,” he wrote in an email.

RELATED: What you don’t know about a leading morning-sickness drug

Duff Conacher, co-founder of Democracy Watch, says the investigations of both the Morneau and Trudeau fundraising dinners should continue because Sherman’s actions placed Apotex in a conflict of interest. “Sherman was not lobbying Trudeau or Morneau—Apotex was,” he says. “And Apotex is still lobbying. He did a huge favour for the Liberals while he was chair of Apotex. The fact he’s gone doesn’t mean the conflict of interest is gone.”

As the commissioner ponders how to proceed, Toronto police continue to investigate the Shermans’ deaths, which they’ve termed “suspicious.” Autopsies revealed that both Barry and Honey died of ligature neck compression, with unconfirmed reports saying they were found hanging side-by-side from a rail near their indoor swimming pool. Although the homicide unit is leading the investigation—and officers continue to guard the home, more than a month later—the case has yet to be officially classified as murder. On Tuesday, a silver Mustang was towed from the scene, presumably for forensic examination.

The Shermans’ four surviving children, who are adamant that both their parents were murdered, have enlisted private investigators to conduct a parallel probe. Leading that effort is Tom Klatt, a retired Toronto homicide detective who is well-respected in the law-enforcement community. Klatt was recently hired by the prestigious Lakefield College School to investigate sexual abuse revelations against a former chaplain.