Newsmakers of 2013: Bashar al-Assad marches on in Syria 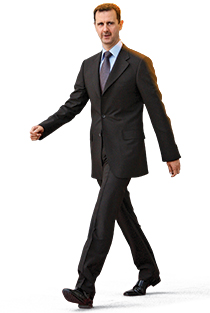 It is impossible to know if the horrors of Syria’s seemingly unrelenting agony might have been mitigated but for a freak high-speed car accident on the road to Damascus International Airport 20 years ago.

The crash, involving a luxury car and a concrete barrier, killed then Syrian president Hafez al-Assad’s eldest and most favoured son, Basil, and meant that the comparatively unknown and less glamorous son, Bashar, then studying ophthalmology in London, would succeed Hafez instead.

Basil might have responded to the first anti-government protests in Syria, in March 2011, with a willingness to bend and compromise. Bashar chose repression. The protests grew into an uprising. And Bashar seemed on his way to sharing the fate of another thuggish dictator confronted by the Arab Spring, Libya’s Moammar Gadhafi: defeat and likely death.

His “days are numbered,” U.S. officials said that summer, a claim repeated by President Barack Obama in March 2012. And why wouldn’t they be? Defections from Assad’s armed forces were steady. Territory was slipping out of his grasp.

But Gadhafi fell to rebels backed by NATO air strikes and foreign special forces. Bashar Assad faced no similar threats. And Russia, which felt hoodwinked by a United Nations Security Council resolution that authorized the use of force in Libya to protect civilians (and was then used to justify regime change), was determined not to abandon Assad. Iran, too, knew it had much to lose in Syria. Assad is Tehran’s most loyal Middle Eastern ally, and Syria gives Iran access to Lebanon, where the Iranian proxy militia Hezbollah can directly threaten Israel.

Iran dispatched advisers and fighters from the Revolutionary Guards to fight for Assad. And this spring Hezbollah fighters joined the war in force, playing a key role in the government capture of al-Qusayr, a strategically important city near Lebanon. Hezbollah’s role was also significant in recent regime victories against rebels in Damascus suburbs.

And so Assad hangs on. His country is shattered, quite possibly beyond repair. More than 100,000 are dead. Millions are displaced. Survivors are starving, eating cats and dogs. The war fuelling all this shows no signs of ending. Assad’s opponents—who now count jihadist sadists among them—are proving difficult to vanquish. But if Assad is not on the cusp of victory, no one in the White House still predicts his days are numbered.

On Aug. 21, more than 1,400 Syrians—the vast majority of them civilians—died in chemical weapons attacks on a rebel-held suburb of Damascus. The United States and its allies blamed Assad’s regime. He denied responsibility. Human Rights Watch, relying in part on evidence from United Nations inspectors indicating where the sarin gas-filled rockets originated, concluded government forces were likely responsible.

According to Barack Obama’s own rhetoric, this should have triggered an American military response that at the very least would have weakened Assad. The use of chemical weapons would be a “red line,” one that would “change my calculus,” Obama had warned in 2012. Instead, when Assad trampled over this red line on his way to slaughtering so many children, Obama struck a deal with the Russians that allowed Assad to continue his slaughter, so long as he gave up the chemical weapons he had until then denied possessing. This is what passes for a diplomatic victory in Washington.

Assad is in rare company. The world has been plagued with an impressively grotesque array of tyrants and dictators since the Second World War. But even among them, only Iraq’s Saddam Hussein used poison gas on a similar scale against his own country’s civilians—murdering some 5,000 Iraqi Kurds in the town of Halabja in 1988.

Saddam is dead. Gadhafi is dead. Hosni Mubarak of Egypt and Zine al-Abidine Ben Ali of Tunisia—both rulers far less blood-soaked than Assad—are deposed. Assad has been luckier. His friends in Moscow and Tehran are unwilling to turn their backs on him. And he confronts the West, and especially Washington, at a time when it is deeply reluctant to intervene militarily in the Middle East.

And so Assad hangs on. Until his brother died, it’s unlikely Assad ever imagined he would one day have to wrestle with the question of how a dictator might hold on to power when his grip on it is loosening. When that time came, he gambled everything on escalating force and cruelty. It’s not entirely accurate to say he’s won. Assad was the president of Syria. He’s now the most powerful warlord in a broken country. But his defeat appears ever more distant.