Behind the PPC’s 'legitimate chance' at winning two seats

How did Maxime Bernier get into the commission debates? Believe it or not, it all starts with Brad Trost. 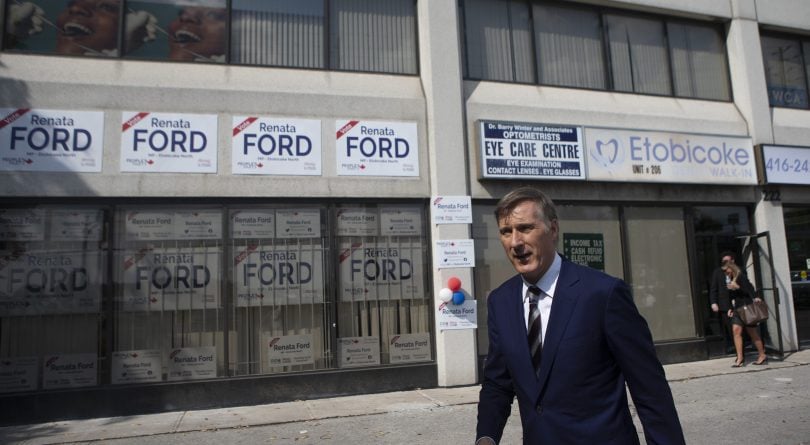 If Andrew Scheer and the Conservatives want to vent over Maxime Bernier getting invited to the official federal leaders debates, they might direct some of their frustration toward one of Scheer’s fellow Tories, who once won a nail-biter of an election: the former MP Brad Trost.

Understanding the importance of Trost’s win 15 years ago in Saskatchewan requires a journey down a winding road traveled by the newly formed Debates Commission, led by former governor general David Johnston.

But it’s an instructive trip, because for Scheer and the other party leaders, what the commission learned, and what it did with that information, may prove pivotal.

The commission, you’ll recall, initially denied Bernier, the Peoples Party of Canada leader, a debate invitation. Yet it tempered that rebuff by offering the PPC the chance to submit several ridings where it believed it had a “legitimate chance” of winning. If the fledgling far-right party could prove based on polling data that it has a reasonable chance to elect more than one MP, that would garner an invite.

With Bernier himself polling neck-and-neck to win re-election in his Quebec seat of Beauce, the PPC leader needed only to prove one fellow party member had a shot his his or her riding.

What, though, is a “legitimate chance?”

RELATED: The case for (some) Max Bernier in the commission debates

To find an answer, the commission tasked Nanos Research to look at every federal election result back to 2004 and find the average, median and minimum percentages attained by winning candidates, regardless of party. Nanos reported back that the average vote to win ridings was around 49 per cent of the total count, while the median hovered around 47.

But the lowest win percentage during the period? That was a feat achieved in 2004 by Trost, a Saskatchewan backbencher known for his socially conservative views. The vote that year in Saskatoon-Humboldt finished with a rare, near-perfectly even four-way vote split between Trost, a Liberal candidate, a New Democrat and an incumbent MP who was running as an independent. Trost beat out his competitors with a mere 26.8 per cent of valid ballots cast.

“Our report said it does not look like it’s possible for anyone to win a riding with less than 25 per cent support,” says Nik Nanos, chief data scientist and founder of Nanos Research, in an interview. “Below that, you could empirically say, there’s no chance. As soon as you get to 26 per cent, you can say there is a chance, regardless of how remote it might be.” (Nanos stresses that his firm did not do any polling or analysis for the commission related to the PPC.)

The commission then concluded that a party required one of every four voters to consider voting for it to have a “reasonable chance to elect its candidate.”

RELATED: The long history of ‘go back to where you came from’ in Canada

So Trost, who lost his nomination race last March and is not running in the current election, set the bar low for what came next.

For the PPC’s best shots at victory, Bernier had proposed the commission look at the Ontario ridings of Nipissing-Timiskaming, Etobicoke North and Pickering-Uxbridge, as well as the Manitoba riding of Charleswood-St.-James-Assiniboia-Headingley.

Never mind that no publicly available poll suggested the PPC were running first or second in those ridings. They are rated “safe” or “likely” wins for the Liberals, according to projections from 338Canada, with the exception of the Charleswood-St.-James-Assiniboia-Headingley, which is considered a toss up between the Liberals and Conservatives. There, the PPC trails both parties by 30 percentage points.

The debates commission then tasked Ekos Research Associates to conduct polls in the four ridings suggested by Bernier. But the commission, as a federal agency, did not want Ekos to poll with a straight ballot question asking which party someone intends to vote for, recalls the firm’s president, Frank Graves. Instead, it merely wanted to gauge the plausibility of PPC being competitive in the ridings.

So Ekos opted for a broader question, probing how likely someone is to vote for the People’s Party of Canada candidate in their riding. “Basically, it was: Are you going to [vote PPC]? Would you be likely to? Would you consider? Or you’re just not considering them at all,” says Graves, “Those were the four choices.”

When Ekos came back with the data, the highest “certain” vote share for a PPC candidate in any of the ridings was 15 per cent. But when combined with respondents saying they were likely to, or could possibly, vote PPC, the number of people who could be said to be “considering” the party rose as high as 34.1 per cent in Nipissing-Timiskaming, and 29.9 per cent in Etobicoke North. Higher, in short, than the share Trost pulled in 2004.

RELATED: 338Canada: The very long odds for the PPC

“We don’t think the candidates in those ridings are the most likely winners,” says Graves. “We don’t think that at all and we told the commission that.” But Graves did inform them that, given how many respondents said they would consider voting PPC, it would be implausible to say they couldn’t possibly win.

That’s a lot of negatives and qualifiers. But with several ridings now notionally above the 25 per cent threshold, Bernier was offered a debate invite—much to the dismay of the Conservatives, who fear his presence in the race could splinter the right-wing vote.

“It’s no big surprise that Justin Trudeau’s hand-picked debate panel used a Liberal-friendly pollster who attacks Andrew Scheer to ultimately justify Mr. Bernier’s attendance at the debate,” groused Daniel Schow, press secretary to the Conservative leader, in a veiled reference to Graves and his sometimes pointed criticism of the Conservative leader on Twitter.

Graves calls the charge “offensive,” saying: “We’ve been in business for 40 years. Whatever the political outcomes of this would have been for any party had zero to do with how we conducted the analysis and the conclusions we’ve drawn.”

Graves adds his firm did not consult with the commission on the question of whether the PPC should be invited to the debate; rather, it simply provided the polling data and analysis.

Suffice to say, the path the commission took to its decision has come into question. Using the lowest recent historical bar to win a riding, and then polling for the highest possible vote consideration for the PPCs, has divided pollsters. And what constitutes a “legitimate chance” at getting elected remains a live issue. (The commission did not return a request for comment.)

“There’s no evidence to suggest [the PPC can win two seats]. Right now, in our polling, they’re running at two per cent. That’s tied with ‘other,’ ” says Darrell Bricker, CEO of the public opinion research firm Ipsos. “We don’t see the PPC having a strong national presence. We don’t see them with a strong regional presence.”

As for whether Bernier and the PPC has a chance of winning in another riding, Bricker—whose firm was not contacted by the commission for input—has his doubts: “If you just asked the normal vote question, I’d be hard pressed to find that other riding.”

“There is a probability, but probability ranges from zero to 100,” adds Christian Bourque, the executive vice-president of the polling firm Léger. “I don’t know how you can say it’s not possible. I’m answering the question backwards.”

Indeed, if there is any consensus, it is that the PPC faces long odds. “It’s either zero or very close to zero in terms of his chances to win, based on our numbers,” says Quito Maggi, the president and CEO of the polling firm Mainstreet Research, who also did not speak with the commission. “But remember, all the greatest mathematicians in the world gave Donald Trump between zero and one per cent [chance] to win the presidency.”

Maggi does agree with Ekos’s approach of not asking a straight ballot question, and instead trying to determine the top-end “considered” vote. And he defends the veteran pollster in the face of Tory attacks: “I fully support that Frank Graves can be opinionated on social media, but all pollsters have opinions. It doesn’t change their math skills.”