Ben Harper, son of Stephen, has been wetting his political feet in Alberta

The 24-year-old is working in the office of Premier Jason Kenney, after holding a couple of different roles in the UCP government 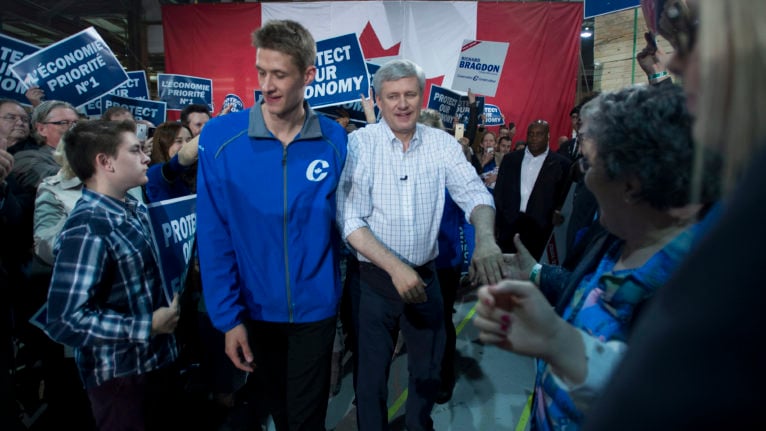 Ben Harper, centre left, on a 2015 campaign stop with his father in Fredericton. (Jonathan Hayward/CP)

Add one more to the long Canadian list of political offspring who follow their parents into government life. Ben Harper, the eldest child of former prime minister Stephen Harper, is now an aide in Alberta Premier Jason Kenney’s office, Maclean’s has confirmed.

The 24-year-old had in fact been quietly working in the Alberta legislature since June, briefly holding aide positions in the offices of Alberta’s finance minister and economic development minister before Kenney hired him to the premier’s team last month, spokeswoman Christine Myatt wrote in an email Thursday. Alberta’s government directory lists Harper as the junior of two policy advisors to Kenney.

Harper is serving on Kenney’s political staff while also remotely completing his second year of a master’s degree in economics at Columbia University, a program for which he moved to New York last fall.

RELATED: What on earth is Stephen Harper up to?

It’s not clear if the former prime minister’s son has plans to seek elected office; he has not spoken publicly about his political ambitions. He could not immediately be reached for comment for this story. But there is a long history in Canada of  senior politicians begetting more politicians, including Prime Minister Justin Trudeau, son of former PM Pierre Trudeau. Brian Mulroney’s oldest daughter, Caroline, is Ontario’s transportation minister under Premier Doug Ford, who himself is the son of a former MPP. Former Alberta premier Rachel Notley’s dad was a longtime NDP leader in the province. Preston Manning, Jack Layton—a list could fill this whole page.

Kenney is familiar both with the Harpers, and with working his way up beneath the eye of an approving leader. He served as parliamentary secretary and then as a cabinet minister in various portfolios throughout the former PM’s nine-year tenure, during which the Harpers—Stephen, his wife Laureen and their children Ben and Rachel—lived at 24 Sussex.

Ben was last in the public eye during the 2015 election, when he and his sister toured extensively with the Conservative leader’s campaign, which his party lost to the Liberals and Justin Trudeau. The then-teenager was said to pitch in with advice, and was present during his father’s debate prep.

Ben apparently also shares his father keenness to discuss government finances: four years ago, as an undergrad at Queen’s University, he co-wrote an Ottawa Citizen opinion piece on the perils of large deficits. The article referred to several past Canadian prime ministers, but not the one he’s related to.

“My relationship with my son is with another adult,” Stephen Harper told Today’s Parent in 2015. “And actually, to be frank about it, he’s actually a good source of advice. I think he’s wise beyond his years. Or maybe I’m not as wise as I think because he seems smarter than me on some of these things.” The former leader has since moved back to Calgary, where he runs the business consultancy Harper & Associates.

Ben Harper’s salary falls below the $111,395 level that requires it be publicly disclosed, Myatt said.