Though officially apolitical, the Guides become tough cookies when their values are threatened 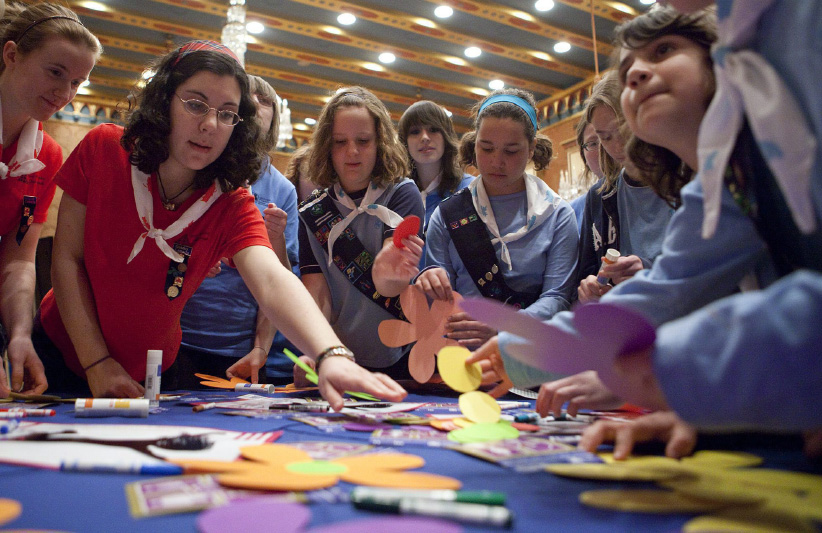 Guides, at the Girl Empower Challenge in Ottawa (Pawel Dwulit/CP)

The words were written in bold: “Girl Guides of Canada will not be approving any new travel to the United States until further notice.” Announced in a statement Monday, the organization cancelled a trip to a camp in California this summer, forfeiting plans to paddle kayaks and saddle ponies, decamping instead to a different country that lets all their girls cross the border.

The Guides insist the move is non-political, but some Canadians are hailing the travel ban as a stance against U.S. President Donald Trump’s travel ban of people from six majority-Muslim countries. The announcement can be seen as part of the Girl Guides’ long history—or “herstory,” as they would call it—of advocacy, feminism, LGBT rights and “STEMinism” (promoting women’s involvement in science, tech, engineering and math). Their recent stance has led many Canadians to applaud, while a few critics have vowed to stop buying what they suddenly see as politically-flavoured cookies.

“Absolutely, categorically, I would say it has nothing to do with the political situation at all,” responds Myrtle Corkum, former Chief Commissioner of Girl Guides Canada. “There couldn’t be a more apolitical organization.” As a registered charity, Girl Guides of Canada cannot hold political ties, instead justifying the announcement with concern that girls from the six listed countries could get left behind. “One of the ultimate goals,” says Corkum, “and why parents trust their girls with us, is we always say we will keep the girls safe.”

Still, the organization appears to be pushing its non-political requirements as far as tax-deductibility allows. The Guides recently tweeted a photo of a Spark (the youngest category of guides, ages 5 to 6) with a picket sign at a march, with the text: “Girls and women are embracing feminism in a new way—and so are we.” The organization unapologetically identifies as “STEMinist,” sending delegates to women’s conferences in Malaysia and beyond. They now welcome trans-gendered youth, opening their doors to “all persons who live their lives as female.” Such activities, Corkum concedes, amount to “a little bit of a small-A advocacy role.”

RELATED: Revenge of the teenage girl

Girl Guides have good reason to advocate, though, with affiliates in four of the six listed countries. The Girl Guides of Syria include both Muslims and Christians and were banned in the late 1900s; after reawakening in 2000, some 2,500 members now recite the oath: “on my honour, I promise that I will do my best to do my duty to God and to my country, to help others and to obey the Girl Scouts/Guides law.” Yemen, Sudan and Libya also have Guiding groups, although Sharron Callahan, international commissioner for Girl Guides of Canada, says members from certain countries have faced trouble travelling to international camps or jamborees, either due to a denial by customs or poor planning. “A country may not be granted a visa,” she says. “That’s usually dealt with behind the scenes by administrators.”

Public protesting also lies at the very origins of Girl Guides. In 1909, the movement began when a girl in England showed up at a Scouts meeting and demanded to join—“she crashed a party, so to speak,” says Corkum. Women and girls then held a rally in London, which led the founder, Lord Baden-Powell, to ask his sister to establish an equivalent organization for girls. The first handbook was called, “How Girls Can Help to Build Up the Empire,” and the earliest badges included not only “house orderly,” featuring a broom stick, and “hostess,” picturing a cup and saucer, but also bee-farming and aeronautics.

Canadians are now praising Girl Guides for effectively protesting against Trump, even if the travel boycott implicates girls as young as kindergarteners. “Everybody has the right to make a political move,” says Greg Bellefontaine, a social media manager in Guelph. “Obviously Girl Guides is run by adults. I believe it’s a teachable moment, for adults who are in charge of these Girl Guides to give the girls a lesson.” Meanwhile, a few critics are attacking the organization on Facebook. One user based in Ottawa, under the name of Scott Mccanna, writes, “because of your stance on travel to the USA I will not be buying cookies anymore … they are using children for pawns.” From Calgary, a profile under the name Blain Maller writes: “Not sure the U.S. is inclusive? On what basis do you make that claim and drag the girls into your political rhetoric?”

Corkum writes off the critics. “If that’s the way they can strike back, they’ll do it,” she says. “I don’t know that we’ll lose a lot of cookie sales over it.”