Big changes in store for B.C. under NDP and Greens

From proportional representation to provincial day care, John Horgan and Andrew Weaver want to close the book on the Clark era. Is the province ready? 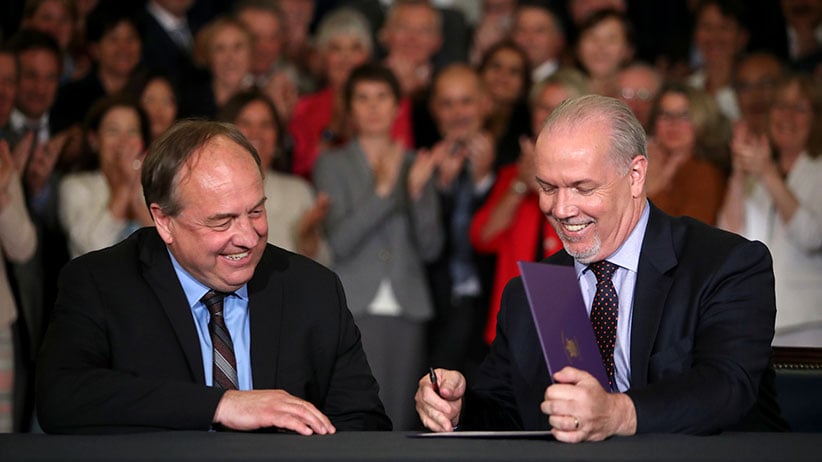 You say you want a revolution, British Columbia. Well, it looks like one begins Wednesday.

The difference between Liberal leader Christy Clark’s funereal press conference in Vancouver and the jubilant one headed Tuesday by the leaders of the New Democrats and Greens in Victoria could not have been more different—in substance, style and just about everything else. And in that tonal shift was an indication, more than three weeks after B.C.’s May 12 vote, that the province may finally have a new premier-in-waiting.

Yesterday’s declaration of victory by NDP leader John Horgan—the fourth since election night, when each of the three party leaders claimed it—seems, at this point anyway, to be the final word. It bookends an extraordinary post-election period for the province. After weeks of exhaustive negotiations, the Greens’ Andrew Weaver, made kingmaker when neither of B.C.’s two main political parties took a majority of seats, chose the New Democrats as partners in government yesterday morning. This came the morning after a marathon negotiating session with the Liberals that ended at 11 p.m., and that Lib negotiators thought went their way. They woke up to a different reality. Green negotiator Norman Spector, limited in what he can say by a non-disclosure agreement, came as close to an explanation for the Liberal failure as can be found, at this point. Clark’s people were “ragging the puck,” he told CKNW, a local radio news station. The NDP, one would surmise, offered a clear alternative.

READ MORE: What the B.C. NDP-Green deal means to the rest of Canada

Sure, some pundits and political scientists are still screaming over each other on Twitter, claiming this isn’t the end for Clark. But even she, a fighter who almost singlehandedly took a 2013 election no one thought she stood a chance of winning, acknowledged as much on Tuesday. The apparent outgoing premier, choking back tears, told a tiny Vancouver audience that a “transition” in government “sure looks” imminent. She didn’t resign, but appeared resigned to reality: no, she would not ask the lieutenant-governor to call a new election. Yes, she was willing to remain on as leader of the Opposition. Her Liberal caucus wants it that way. 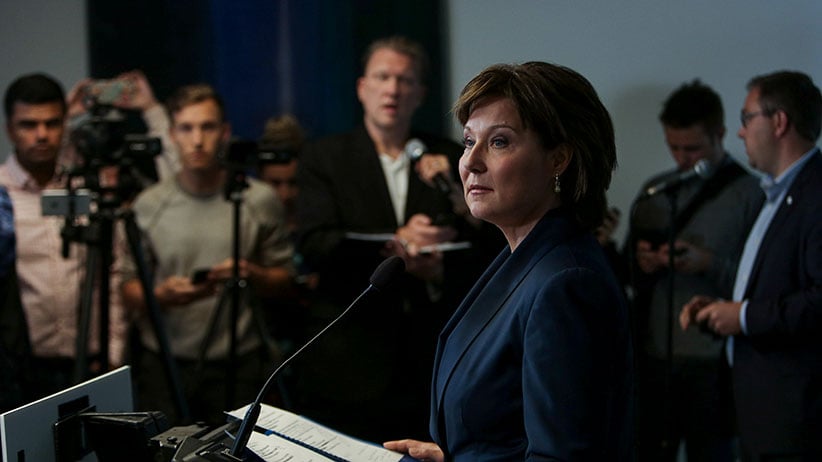 An emotional Clark, at a news conference in Vancouver, conceded likely defeat when the provincial assembly reconvenes (CP)

For the first time in years, the action was in Victoria, B.C.’s actual capital, at the provincial legislature. There, John Horgan, the apparent premier-in-waiting, and Weaver, flanked by their entire caucuses—standing together, of course, united behind their leaders—put the pen to a surprise accord first announced on Monday. Their members came up one after the other to sign it in turn. For political theatre, they get top marks.

This is no coalition, as the leaders keep repeating. The deal would see Weaver backstop a Horgan government on confidence motions only. On everything else, and in keeping with the Greens’ idealistic vision of democracy, the three people in the Green caucus are free to vote any which way they please.

The vibe was joyous. Weaver, grinning wildly, deft on his feet, had reporters howling more than once. By the end, he was red-faced and sweating at the collar. It was quite the performance. On the subject of Alberta Premier Rachel Notley, who took a shot at the government-in-waiting’s belief they can stop the expansion of the Kinder Morgan pipeline, he grew furious, pointing his finger, as if at the Alberta premier: “If Notley thinks there is no way for B.C. to stop Kinder Morgan, I suggest she look at Section 35 of the Constitution,” he thundered. Here was Captain B.C., ready to defend the coast from dirty Alberta bitumen.

RELATED: On pipeline, Horgan and Weaver can do little but posture

Then he shot down Notley’s claim this would kill B.C. jobs as “classic fear-mongering.” The “idea that somehow a pipeline in a market that doesn’t exist is going to create jobs in British Columbia is nothing more than a myth. For Ms. Notley to tell British Columbia that somehow chasing the 20th century is the way for our future is not a good sign for her and her economy in Alberta. Frankly I think she should get with the program and embrace the 21st century.”

It was also a dramatic illustration of the risk inherent in the arrangement for the NDP. Weaver, a Cambridge-trained climate scientist who can lay claim to being co-winner of a Nobel Peace Prize, can be a formidable speaker—particularly when challenged. Horgan was outshone by his Green partner on several answers. Yet the backdrop of the event, the united Green-NDP caucus, was a dramatic illustration of the risk for the smaller party: few reporters in the room knew which new MLAs were Greens.

As for the meat of the deal, revolutionary doesn’t quite capture it. If implemented, B.C. is mandating a $15-an-hour minimum wage and bringing in a Quebec-style provincial daycare system (how much parents might be expected to pay has yet to be determined). The new government will purportedly deploy “every tool available” to stop Kinder Morgan. The controversial Site C Hydro dam would be immediately punted to the provincial utilities commission, who would study its economic viability. B.C. would get a new minister of addictions and mental health, tasked with developing an immediate response to the fentanyl crisis. Proportional representation would be put to a referendum in fall 2018 (both leaders promise to campaign vigorously for it).

RELATED: Is electoral reform dying out?

Campaign financing and lobbying would be overhauled: corporate, union, outside donations and dark money would be immediately banned. Political contributions would be capped. Lobbyists would be reined in. The carbon tax, which has been frozen by the Liberals, negating the entire point of the thing—when drivers stop noticing the gas tax, it stops affecting behaviour—will be hiked by $5 a tonne per year, hitting $50 by 2021. And on it goes.

It’s quite the plan. And it’s diametrically opposed to the direction the Liberals have taken B.C. over the past 16 years. But the two Victoria-raised fathers-of-two tasked with implementing it, who stand exactly the same height; who share the same, slight, middle-aged spread; who were born within 12 months of the other; who grew up within a few kilometres of the other; who chose the same light-blue shade of shirt for today’s presser, seem ready for the challenging road ahead. It begins tomorrow, when they deliver their signed accord to Lieut.-Gov. Judith Guichon, and tell her just how ready they are to form government.