By Michael Biesecker, Jill Colvin and Steve Peoples, The Associated Press May 31, 2016 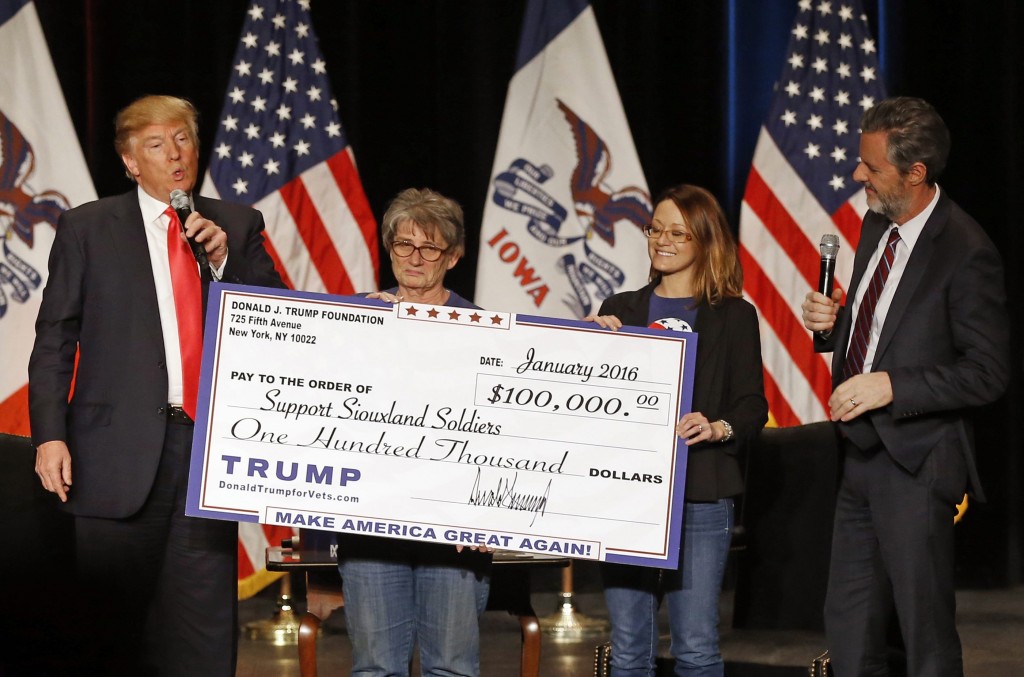 FILE – In this Jan. 31, 2016 file photo, Republican presidential candidate Donald Trump, left, presents a check to members of Support Siouxland Soldiers during a campaign event at the Orpheum Theatre in Sioux City, Iowa. Under pressure to account for money he claimed to raise for veterans, an angry and irritated Donald Trump listed charities Tuesday, May 31, 2016, he says have now received millions of dollars from a fundraiser he held in January. (AP Photo/Patrick Semansky, File)

NEW YORK – More than a dozen big checks flowed out of New York last week, bound for veterans’ charities from Donald Trump. On Tuesday, he announced he had made good on his promise of last January to give the groups millions of dollars from a highly publicized fundraiser.

The announcement by the presumptive Republican presidential candidate came in the midst of a 40-minute rant against “dishonest” and “sleazy” reporters who have been pressing the issue.

The largest donation, a $1 million check dated May 24 and drawn from Donald J. Trump’s personal account, was addressed to a small Tuckahoe, New York, group that provides scholarships to the children of fallen Marines.

Trump had been interviewed that same day by The Washington Post, which for weeks had been raising questions about where the promised money was, urging him to disclose recipients of the millions raised during a splashy telethon-style fundraiser he held in Iowa in January in place of a Fox debate he was boycotting.

At a news conference Tuesday, Trump released a list of 41 groups he said had received $5.6 million.

“Most of the money went out quite a while ago,” Trump said. “Some of it went out more recently. But all of this has gone out.”

Throughout Tuesday’s confrontational event, Trump repeatedly slammed the media as “unbelievably dishonest” for its treatment of the issue and dismissed an ABC reporter as “a sleaze.” He said many times that he didn’t want credit for the fundraising but seemed peeved that he wasn’t thanked for it.

The Associated Press spoke or left messages with each of the organizations Trump named. Of the 30 groups that responded by Tuesday, about half said they had received checks from Trump just last week.

Several said the checks were dated May 24 – the same date as Trump’s interview with The Post, and shipped out overnight express.

Among them was the big check from Trump himself, written to the Marine Corps-Law Enforcement Foundation. Trump’s campaign had previously told the newspaper that his promised $1 million personal donation had already been distributed.

Though the foundation had received a $100,000 check from Trump’s charity in March, last week’s $1 million donation came as something of a surprise.

“It is obviously a wonderful donation,” said Sue Boulhosa, the group’s executive director and sole employee. She said the group had “an inkling” that more might come but the amount was a happy surprise.

Trump has a longstanding relationship with the group, which Boulhosa said typically raises a total of between $2 million and $3 million a year. The foundation had presented Trump with an award at its 2015 gala held at a New York hotel.

Appearing on CNN Tuesday, Democratic presidential front-runner Hillary Clinton said she was glad that Trump had given out the promised money.

“The problem here is the difference between what Donald Trump says and what Donald Trump does,” Clinton said. “He’s bragged for months about raising $6 million for vets and donating $1 million himself, but it took a reporter to shame him into actually making the contribution.”

Trump’s campaign manager Corey Lewandowski had originally told the Post that the event had raised about $4.5 million – less than the $6 million originally announced by Trump – because some who’d pledged had backed out. Lewandowski also said all the money had been given out.

Trump had claimed during the fundraiser that he’d raised $6 million through a combination of pledges from wealthy friends, the public and $1 million from himself.

But the campaign refused for months to disclose which charities had received the money, leading to questions about whether the money raised was less than he had said.

“It was very unfair that the press treated us so badly,” Trump complained Tuesday.

He suggested he had hoped to keep the donations private. However, Trump hadn’t appeared shy about giving away poster-sized checks at campaign events in the weeks after the fundraiser.

On Jan. 30, just before the campaign’s leadoff caucuses in Iowa, he gave a $100,000 check to the Puppy Jake Foundation, which provides service dogs to wounded veterans. Representatives from the foundation, accompanies by several service dogs, accepted the check at the Adler Theater in Davenport, Iowa, where Trump was being interviewed on stage by Jerry Falwell Jr.

The next day, in Council Bluffs, Trump presented another check, also for $100,000, to Partners for Patriots, which also provides service dogs to disabled veterans.

The public presentations trickled off within days, though some of the groups contacted by AP did report receiving checks in February, March and April.

But the biggest batch appeared to have gone out May 24, with several of the groups saying they had no contact with the Trump organization before that.

Trump spokeswoman Hope Hicks denied Tuesday that timing had anything to do with questions from the media.

“Mr. Trump’s team worked very hard to complete this lengthy process prior to Memorial Day Weekend,” she said. The campaign also said it had taken months to carefully vet each of the groups receiving money.