Bipartisan efforts on NAFTA hurt by divisions over Khadr

Omar Khadr walks to meet the press before a news conference after being released on bail in Edmonton, Alberta, May 7, 2015. Khadr, a Canadian, was once the youngest prisoner held on terror charges at Guantanamo Bay. (Todd Korol/Reuters)

OTTAWA – The bipartisan common front to defend Canadian interests in crucial NAFTA negotiations is being tested by a cross-border Conservative campaign savaging Justin Trudeau for making a generous federal payout to Omar Khadr.

Some senior Liberals, including the prime minister’s principal secretary, have taken to social media to accuse the Conservatives of fanning anti-Trudeau sentiment in the United States just as Canada is preparing for the Aug. 16 launch of talks to overhaul the North American Free Trade Agreement.

However, Conservative Leader Andrew Scheer was unrepentant Thursday, arguing that if there’s any American backlash over the Khadr payment, Trudeau has only himself to blame. He dismissed any linkage to the NAFTA talks as a desperate Liberal tactic.

“It’s no surprise that they’re desperately trying to latch onto another angle of the story to deflect attention from the core of the matter which is that this (Khadr payment) was a personal decision by Justin Trudeau to go above and beyond what any court order ever indicated was the responsibility of the government,” Scheer told a news conference.

Fifteen years ago, the Canadian-born Khadr was imprisoned in the notorious U.S. detention facility Guantanamo, accused of killing an American soldier/medic during a firefight in Afghanistan. Khadr was just 15 years old at the time.

The Supreme Court of Canada ruled in 2010 that Canadian authorities violated Khadr’s charter rights when they interrogated him there, despite the fact he was a minor, had no legal representation and had been tortured.

Khadr subsequently launched a $20-million civil suit against the Canadian government. That was settled earlier this month when the government agreed to pay him compensation – reportedly $10.5 million – rather than pursue what officials said would have been a costly court battle that the government had no hope of winning.

Several Conservative MPs have taken to the airwaves and newspapers in the U.S. to denounce the payment, starting Monday with a scathing column by Peter Kent in the Wall Street Journal entitled “A Terrorist’s Big Payday, Courtesy of Trudeau.” 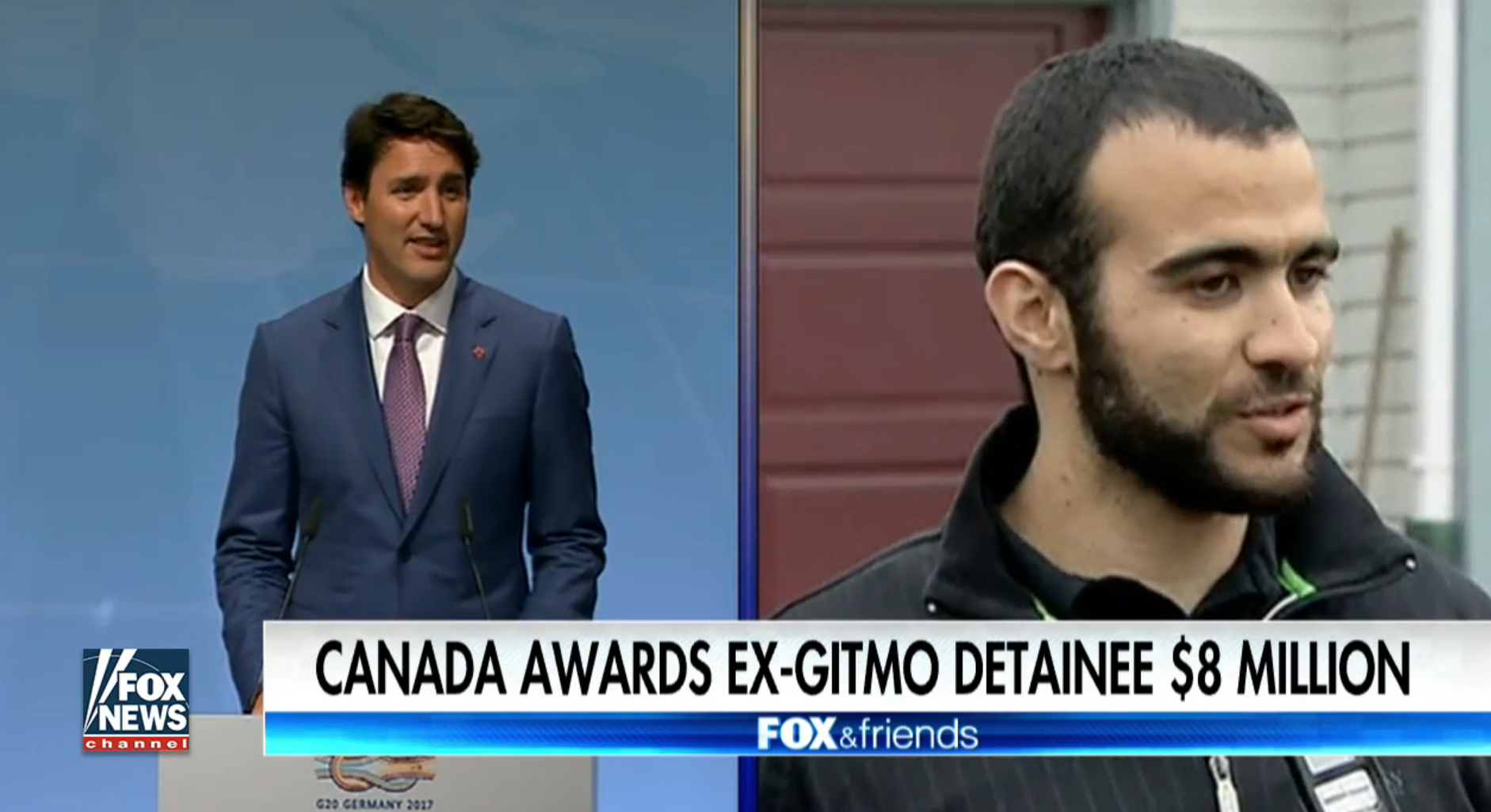 On Thursday, Trudeau did not directly link the two issues when asked if the Conservative campaign in the U.S. is hurting Canada’s position as it prepares to enter NAFTA negotiations.

The trade talks are “too important to fall into partisanship for most people,” he said during a news conference in Barrie, Ont.

“Canadians expect their representatives, whatever party they be part of, to be standing up for Canadian interests and making sure that we are creating the right deal for Canada as we move forward on modernizing NAFTA.”

RELATED: In the Khadr settlement, the Conservatives find their fight

However, Trudeau’s principal secretary, Gerald Butts, has engaged in a Twitter war with several Conservative MPs over the past few days in which he has directly linked the two issues.

“Conservatives mount aggressive anti-PM campaign in the US on the eve of NAFTA renegotiation,” he tweeted at one point.

His tweets Thursday suggested Tories should confine their criticism of the Khadr payment to Canadian soil, advising one Tory MP that even when Liberals “disagreed with your government’s approach to the U.S., we supported you while in the U.S.”

But Scheer dismissed that argument, saying, “It’s not credible to think that somehow the news and commentary somehow stops at the border.”

He said the Khadr issue is completely separate from NAFTA, on which Conservatives will continue to “present a united front” in the U.S. with the governing Liberals on the benefits of free trade.

The partisan quarrel comes as the Commons international trade committee is poised to meet Friday to consider a joint Conservative-NDP request for an emergency summer meeting to grill key ministers on Canada’s approach to the NAFTA negotiations.

A spokesman for Freeland said she has happily accepted the invite.

“We are working with the committee to confirm a date as quickly as possible,” Adam Austen said in an email.