Politics Insider for Sept. 3, 2021: The leaders trade barbs in the French language debate, plus a poll showing voters are still expecting the Liberals to win 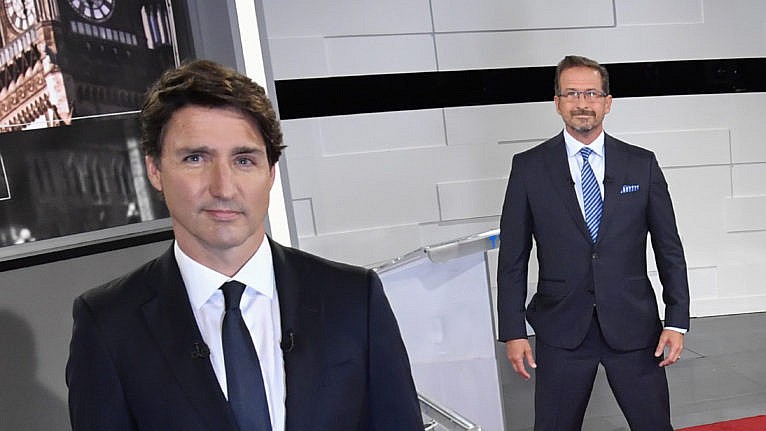 Justin Trudeau, Erin O’Toole, Jean-Yves Blanchet and Jagmeet Singh traded barbs in a vigorous, well-conducted French-language leaders’ debate on TVA on Thursday night. The leaders, who had a lot on the line in the first debate of the election, had pointed exchanges over the pandemic, the election, racism and gun control.

The initial reaction from Quebec pundits after the debate was that Blanchet performed well, Trudeau showed passion, O’Toole managed to avoid huge pitfalls and Singh struggled. The initial consensus seemed to be that Trudeau and Blanchet, debating in their mother tongue, outperformed the other two.

La Presse has a debate-night story up (translation), leading with Trudeau under attack for calling the election, a theme the other leaders returned to through the night. Global has an English story.

Justin Ling was in attendance for Maclean’s, and noted a worrying trend. “For two hours in the TVA studios in Montreal, the four party leaders with representation in Quebec sparred about who was best-placed to, in effect, send the most money while doing the least in Quebec.”

It was particularly evident in Erin O’Toole’s pitch to Quebecers:

O’Toole, for his part, tried to out-Bloc the Bloc. Health-care transfers? You bet. More authority for immigration? Sure thing. Banning religious symbols? Fine with me. O’Toole, who continues to struggle in Quebec even as he rises in the polls elsewhere, made a compelling pitch to Bloc voters: “I agree with him,” O’Toole said of Blanchet at one point. “The difference is that I’m the only one who can be the Prime Minister.”

In the last election, the TVA debate was a significant vote mover. It was not clear to your correspondent that anything as significant happened last night, but we will have to wait for commentary and polls to tell us that.

Lagging indicator? Maclean’s poll decipherer Philippe J. Fournier has a new piece up at Maclean’s, wherein he notes that many voters are still expecting the Liberals to win, based, first, on the most recent Leger poll.

A near majority of voters from other parties also believe Justin Trudeau will remain in power after the election. Indeed, 40 per cent of New Democrat voters, 53 per cent of Bloc Québécois and 45 per cent of Green Party voters still believe that the Liberals will form the next government, proportions more than twice as large as those who believe that the Conservative will win on Sept. 20. This morning, the Angus Reid Institute (ARI) released similar data and that points to a high confidence towards Justin Trudeau and the Liberals, despite their poor poll results since the campaign began. According to ARI, 61 per cent of voters believe Trudeau will win the election, and only 34 per cent believe the CPC will take over (5 per cent say the NDP will win).

The implications of that insight struck your correspondent as so interesting that he called up Fournier for a conversation about that, and other things, trying to figure out where the race sits at the halfway mark.

How was Saini cleared? On Thursday, Conservative MP Michelle Rempel Garner sent a letter to Clerk of the House of Commons asking him for details about a review of Liberal MP Raj Saini’s office, CBC reports. CBC cites seven sources of four different instances of Saini allegedly behaving inappropriately toward Liberal staffers. Saini denies acting inappropriately and Trudeau has defended him, insisting “there have been rigorous processes undertaken.” But, CBC reports, a female staffer who alleges Saini mistreated her said she wasn’t allowed to take part in the workplace assessment. “This does not sound like an actual investigation, and certainly not one conducted under the Policy,” Rempel Garner wrote to the clerk.

Conservatives and New Democrats have accused the Liberals of turning a blind eye to inappropriate behaviour, citing incidents in the Canadian Forces, and Conservatives in particular are frustrated that the Saini story hasn’t been receiving more media coverage.

In Maclean’s, Paul Wells has some questions about the Conservatives’ platform:

Why have two parties managed to get at least part of their platforms costed and cleared for public release, but not the third? For that matter, since the Conservatives’ platform had already “been costed internally”—a normal process for any party, and one which requires no participation by the Parliamentary Budget Officer or anyone else—why have they still not released their own internal costing? The campaign’s half over. Erin O’Toole may be Canada’s next prime minister. Shouldn’t he tell us what that’ll cost?

The party gave him an answer, sort of: it’s on the way.

In the Globe, Konrad Yakabuski has a not-very-cheery column covering similar terrain, although he is grumpy with all the parties for fiscal irresponsibility, ignoring a fiscal crunch that is coming.

No matter which party wins the Sept. 20 election, it is likely to face strong economic headwinds before long. The competitiveness challenges Canada’s economy faced before the pandemic have not disappeared, and they risk becoming more acute as the federal and provincial governments grapple with much higher debt levels.

Passport working: More Ontarians are rolling up their sleeves after Doug Ford announced a provincial vaccine certificate program, Christine Elliott said Thursday on Twitter. The system will require Ontarians to be jabbed to enter theatres, gyms and restaurants, starting on Sept. 22. A spokeswoman for Elliott told the Canadian Press there were 7,125 COVID-19 vaccine appointments booked through the provincial portal alone on Wednesday, compared to 3,479 a day earlier.

Unrest in B.C.: On the other side of the country, in B.C., thousands of people opposed to COVID-19 vaccinations demonstrated outside hospitals  on Wednesday afternoon, CBC reports. Protesters carried signs with slogans criticizing vaccine passports as a form of discrimination and chanted “freedom” and “crimes against humanity.” One health-care worker reported an assault and there were reports of difficulties getting into and out of hospitals. Health Minister Adrian Dix described the protests as “despicable.”

No violation: The elections commissioner has ruled that Chrystia Freeland did not violate the Elections Act when she tweeted a deceptive attack on O’Toole, CBC reports. Freeland’s tweet contained edited video footage of O’Toole discussing health policy, which Twitter labelled “manipulated media.”

Ouch: Green Party Leader Annamie Paul appeared to give a thumbs-up to the Liberals’ plan on climate change during a speech on Thursday, CBC reports. “I’ll tell the people of Canada that if you want a real plan … the only option in this election for you is the Liberals,” Paul said. Paul’s press secretary said she misspoke, and she doesn’t support the Liberal plan.