Boots on the ground in Afghanistan

Politics Insider for Aug. 20: Canadian troops coordinate with the U.S. to help Canadians and Afghans get out, Trudeau promises help for long-term care, and a reprieve for Annamie Paul 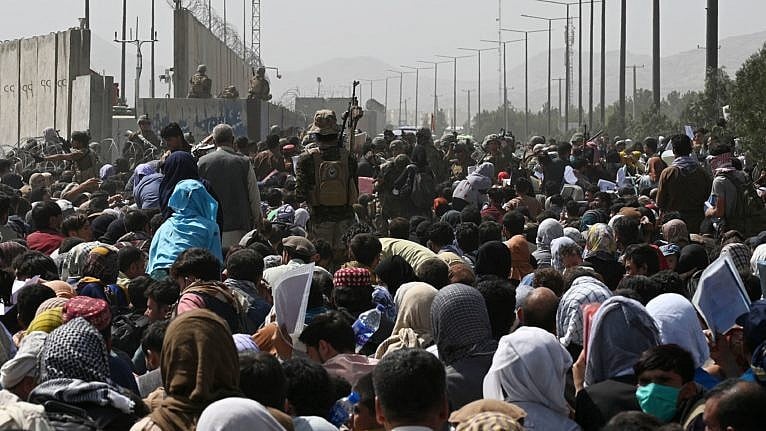 Afghans gather on a roadside near the military part of the airport in Kabul on August 20, 2021, hoping to flee from the country after the Taliban's military takeover of Afghanistan. (Wakil KOHSAR / AFP)

Canadian troops are on the ground in Afghanistan to co-ordinate with the United States to help get Canadians and Afghans out, Justin Trudeau said Thursday, the Globe reports: “Canada has personnel on the ground now and we’ll have more personnel arriving later today to help with the processing.”

He criticized the Taliban for limiting the movements of fleeing Afghans, and warned it would be “almost impossible” to get everyone out: “Unless the Taliban shift their posture significantly, which is something the international community and Canada are working on, it is going to be very difficult to get many people out.”

In Maclean’s, Justin Ling writes about trying to find out what the parties seeking your vote have to say about the collapse of the Afghan government, and doesn’t get much in the way of answers.

For a thousand reasons, it’s worth continuing to press these leaders for clarity on their position. Because it’s one thing to, as Trudeau did, pledge reflection and introspection. It’s quite another to say no to an ally in need of military assistance, or decline an invitation to launch airstrikes against a genocidal regime. If, or maybe more accurately when, we get there, it would be nice to have a government which has already elucidated the principles which govern its engagement. Will Canada put boots on the ground? Will it topple one government in favour of another? Will it stay behind to do counter-insurgency? Will its peacekeeping forces do patrols, or will they stay inside the wire?

In the Ottawa Citizen, David Pugliese goes through his files and reminds us that many important people were totally wrong about the whole thing.

Liberal Senator Colin Kenny warned in 2009 that the Afghan mission was futile. “What we hoped to accomplish in Afghanistan has proved to be impossible,” Kenny noted. “We are hurtling toward a Vietnam ending,” Then Brig.-Gen. Jonathan Vance rebuked Kenny for his “uninformed” opinion.

Long-term care help: Trudeau made his Afghan comments at a campaign stop in Victoria where he unveiled a campaign promise: $9 billion for Canada’s long-term care sector, CBC reports.

Long-term care residents accounted for around 80 per cent of all reported COVID-19 deaths during the first wave of the pandemic, and continued to account for a disproportionate share of deaths until vaccines were made widely available. Trudeau said a Liberal government also would push for a new $25 per hour minimum wage for personal support workers — although achieving that new standard would require cooperation from the provinces and territories.

O’Toole pro-choice: In Ottawa, Erin O’Toole pushed pack against Liberal claims that he’s just “pretending” to support a woman’s right to choose, CBC reports. “Let me be perfectly clear. As a pro-choice leader of this party, I will make sure that we defend the rights of women to make the choice for themselves with respect to their own health. We will make sure abortion services are available from one ocean to the other.”

O’Toole was responding to a tweet thread from Liberal MP Maryam Monsef , who cast doubt on O’Toole’s position, a normal feature of Liberal-Conservative battles in Canadian election campaigns.

All leaders have a scant 35 days to score their points, in an atmosphere of pandemic uncertainty and financial anxiety. If the opposition succeed in dragging the Liberals onto economic terrain, and attacking from both the left and the right on issues of affordability, their incumbent advantage could melt away.

Sinclair speaks: In Maclean’s, Marie-Danielle Smith has a long interview with Murray Sinclair, in which he reveals, among other interesting things, that he was asked if he wanted to be governor general.

Q: The first Indigenous governor general was just appointed. Do you think it’s possible to use a role so deeply imbued with colonialism to advance reconciliation?
A: It’s an open secret, I think, but people know that I was asked early on if I would allow my name to stand for nomination for governor general. And I said no. I’m too old, first of all. And I want to spend time with my family. But I said I never was opposed to an Indigenous person becoming governor general. I said it’s perfectly apt for us to think about it. The governor general should be the one to help repair the relationship between Indigenous people and the Crown. And the Crown is represented by human beings, but the Crown is really a nation, the British Empire, and so the question is: do we really want to be part of the British Empire anymore? I think that’s a realistic question. But if there is merit to maintaining that relationship, then who better to carry out the Crown’s obligations with regard to the treaties than an Indigenous person?

Unvaxed exile: In Toronto, Doug Ford’s ultimatum to two unvaccinated MPPs was to lead to the ejection of a defiant Rick Nicholls, QP briefing reports.

PCs sorry for scam: The Ontario Progressive Conservatives apologized Thursday for mailing out fake “invoices” soliciting cash, the Star reports. The request for payment for the Tories’ “election readiness fund” was designed to look like an overdue bill.

The Bulldog: In other Maclean’s election coverage:

–Philippe J. Fournier looks at the latest Abacus Data poll, which shows an uptick in dissatisfaction with the federal government. The numbers could be troubling for Justin Trudeau.

–Fatima Syed has an election story about a leader’s school yearbook. But don’t worry, this is nothing like that other one. It turns out that in Grade 8, Erin O’Toole (aka ‘Erin O’) had a particular vision for what he might grow up to be.