Stephen Maher: Ontario's premier seems determined to put his friend in charge of the OPP, which is much more worrying than L'affair SNC-Lavalin 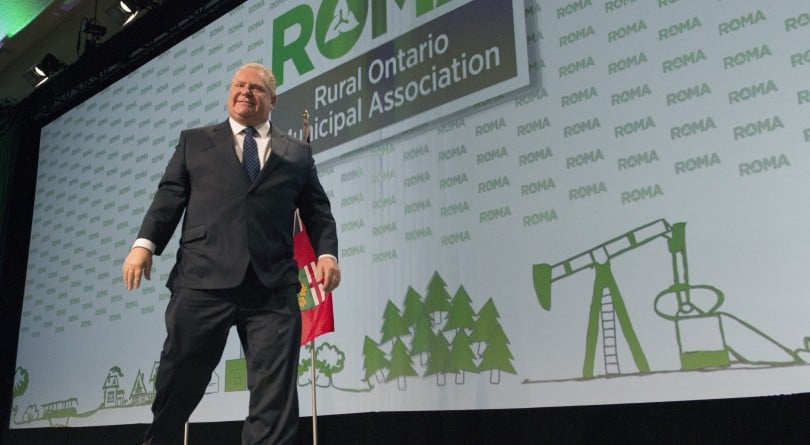 On Monday, after a month in which Justin Trudeau’s government has been tearing itself apart over allegations of interference with the corruption prosecution of SNC-Lavalin, Ontario Premier Doug Ford fired the deputy commissioner of the Ontario Provincial Police.

Trudeau’s government is on the brink of collapse over allegations that he exerted improper pressure, so far as we know, for straightforward political reasons: to save jobs and help politicians who might help him in the upcoming election.

For his arrogance and foolishness, Trudeau is now being brought low by members of his cabinet: Jody Wilson-Raybould and Jane Philpott’s resignations may yet bring him down, since if these front benchers no longer have confidence in him, how can voters?

READ MORE: Ontarians, we’re all living in a Dukes of Hazzard show now

Meanwhile, in Toronto, Ford is acting like the president of a banana republic, or the commissioner of Hazzard County, and his cabinet ministers are apparently all fine with that. They should not be.

Boss Ford is trying to put his friend, 72-year-old Ron Taverner, in charge of the 7,383-strong Ontario Provincial Police, although Taverner’s resume does not compare with his predecessors, or that of Brad Blair, the deputy commissioner.

When Boss Ford’s people decided to give the job to Taverner instead of Blair, Blair sued. In that case, he entered into evidence emails from Ford complaining about his protection detail and seeking an executive van, complete with big chairs and a TV, so he can ride around the province in style and comfort.

On Friday, Boss Ford’s hand-picked deputy minister of community safety, Mario Di Tommaso, wrote a letter firing Blair. Di Tomasso, who was Taverner’s boss in the Toronto Police Service, was on the three-person committee that hired him.

Boss Ford’s people are defending the decision on the grounds that Blair had no right to use Ford’s emails in his lawsuit.

A judge will eventually rule on that. Until that distant day, however, Ontario is being governed by Ford, who seems determined to put his friend in charge of the provincial police.

This is much more worrying than l’affair SNC-Lavalin, because the police must be independent of government, and this government seems not to have any understanding that.

I don’t recall any political leader doing something as dangerous and ham-handed as trying to put a crony at the head of a police force. Jean Chretien was thought to be too close to former RCMP Commissioner Giuliano Zaccardelli—whose intervention in the 2006 election torpedoed the campaign of Chretien’s enemy Paul Martin—but they weren’t drinking buddies.

There are few things more important in a democracy than keeping politicians from interfering in judicial processes and police business. It’s what separates Canada from banana republics, or Hazzard County.

But Boss Ford does not seem to appreciate that there is a line. And, unlike Trudeau, nobody in his cabinet is resigning or speaking out about the importance of the rule of law.

In November, Ford’s chief of staff, Dean French, is reported to have ordered the OPP to raid black market cannabis shops on the day weed became legal because he wanted to show “people in handcuffs,” presumably so the government could deliver a tough-on-crime message on TV.

That was shut down, but would it be next time? Jenni Byrne, the former Stephen Harper staffer who was a counterbalance to French, left Ford’s office in January. Insiders expect staffers close to her may follow her out the door.

French and Ford are now more firmly in control, and if they finally get Taverner into the top job at the OPP, the whole police force will be suspect every time it touches a file with political ramifications. This will be terrible for the public’s perception of the force.

Given the OPP’s crucial role in investigating wrongdoing by politicians, it is not acceptable to have the force run by someone so close to the premier.

And I think it is necessary to point out that there are reasons to wonder if Boss Ford is as personally committed to the rule of law as a premier should be.

Wilson-Raybould has rightly been lauded for standing up to Trudeau in defence of the rule of law. We can only hope that there are people as brave in Boss Ford’s cabinet.