The President renews his attack on Fake Nefefe. Or does he? 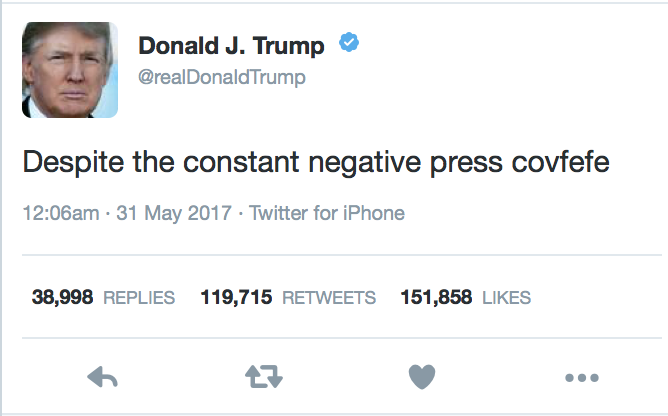 The tweet was not immediately deleted, leading some to believe that “covfefe” was not in fact a typo. But what could it mean?

Across the U.S. and around the world, reaction was swift. On CNN, a solemn Van Jones declared: “This is the moment that Donald Trump became Presifefe.”

Before dawn, Newt Gingrich divorced his wife and married a much younger woman so he could father a child named Covfefe. Senate Leader Mitch McConnell demanded the appointment of a special counsel to see if there was a way to blame Hillary Clinton for this. Vladimir Putin smiled, shook his head and had a good laugh.

In Bozeman, Montana, a mob of loyal Trump supporters burned the town dictionary for failing to anticipate the President’s creation of a new word. The local congressman declared: “We couldn’t find an actual dictionary, but this Applebee’s menu looks pretty much the same when it’s on fire.”

Somewhere near a missile silo in Colorado, a young Army officer double-checked the nuclear codes, breathed a sigh of relief and placed his launch key back around his neck: “Not valid, General,” he said. “It has to be ‘covffefe’ with three f’s.”

Meanwhile, capitalizing on the uncertainty, Paul Ryan introduced a new amendment to the American Health Care Act, stating that the 23 million people destined to lose their health coverage “shall hereafter also receive one (1) kick to the shins.” Ryan pointed out: “A good, firm shin kick embodies both the letter and the spirit of the President’s ongoing commitment to covfefe.”

In Hollywood, filmmakers seized on the mysterious “word.” Did this seemingly accidental configuration of letters hold the key to truly understanding the life of Donald Trump? Certainly there must be deep meaning to anything an older man filled with regrets would utter alone in the dark of night.

Was “Covfefe” something that brought Trump great joy in adolescence? A wooden sled, perhaps?  Or the name of a young black child whose family was denied tenancy in a Trump family building? Alas, we won’t know for certain until the summer of 2019 and the opening of Michael Bay’s $300 million movie Citizen Trump (and Also Several Transformers).

Trump spokesman Sean Spicer told reporters that he’d answer their questions about covfefe “as soon as I can figure out why these trousers feel kind of –– oh, I put them on backwards again. Hang on I just gotta…” [Sounds of him falling over.]

Trump’s tweet also generated a number of official statements, including a terse message from The Glowing Orb of Saudi Arabia.

“This is normal human process after contact with Orb,” said the statement, which was beamed directly to the cerebral cortex of all living things. “Synapses reconfiguring. Transformation soon complete. World soon free of dissent and triangles. ALL HAIL ORB.”

Around 6 o’clock in the morning, the tweet disappeared from Trump’s timeline. The President was awake. It was the start of another new dafefe.