Brian Jean says he is sorry for 'beat Notley' remark 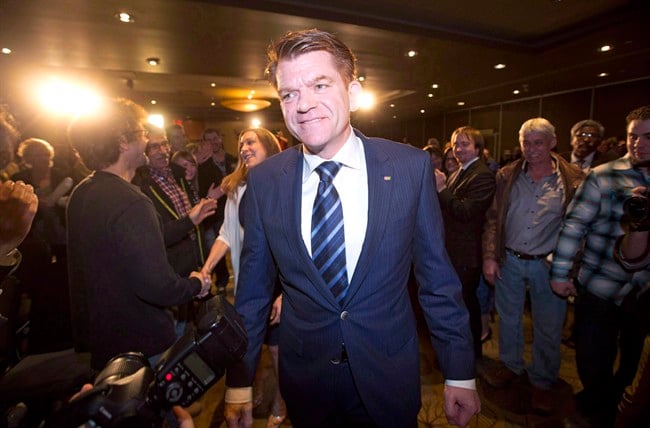 Alberta Wildrose Leader Brian Jean walks through the crowd after being declared the official opposition in Fort McMurray, Alta., on Tuesday May 5, 2015. (Jason Franson/CP)

FORT MCMURRAY, Alta. — Alberta Opposition Wildrose Leader Brian Jean is apologizing for a remark he made at a public meeting that appeared to intimate violence against NDP Premier Rachel Notley.

Jean was at a town hall gathering Tuesday night in Fort McMurray, where the Wildrose has been holding a caucus retreat this week.

At one point, he responded to concerns and complaints from the crowd about the level of seniors care and housing in the northern city.

“Let’s be honest. I’ve been beating this drum for 10, 11, 12 years now, so I will continue to beat it, I promise. But it is against the law to beat Rachel Notley, so …” he said before being cut off by laughter and applause.

Moments later, Jean backtracked on his remark, saying the premier has been accommodating on the issue by switching the policy of the previous Tory government.

“Now, I have to compliment that woman and I shouldn’t have said what I said because I truly admire her for that,” he said.

“That was a very practical thing and not necessarily in her best interest, because she could have easily just let that go as it was and blamed the previous government. She did not, so I think Rachel Notley deserves a round of applause.”

Jean said in a statement issued by his office Wednesday morning that he made an “inappropriate attempt at humour” and quickly apologized for it.

“Jokes of this nature are never acceptable and I hold myself to a higher standard,” he said. “I have reached out to Premier Notley to sincerely apologize directly to her.”

Jean has said in the past that he deplores those who threaten violence against public figures.