Can Canada keep up with a global icebreaker boom?

Russia, China and the United States are racing to build big ships meant to slice through ice in an Arctic region rich in natural resources and new shipping lanes. Canada's backyard is at stake. 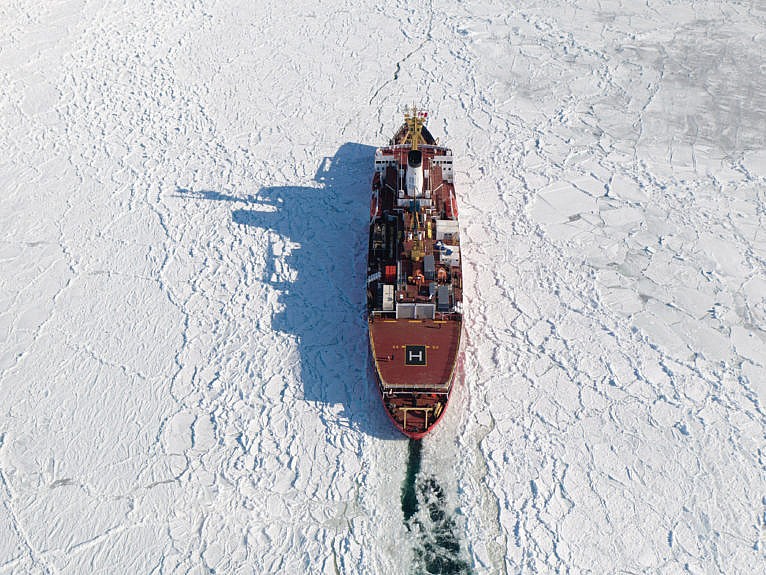 CCGS Louis S. St-Laurent in seen in the Gulf of the St. Lawrence escorting a cargo ship through a path of ice in February 2020 (Courtesy of Canadian Coast Guard)

Joe Clark wasn’t the first Canadian politician to promise the world’s most powerful icebreaker, and he won’t be the last. Clark, as foreign minister in 1985, staked his expensive pledge to build a ship that could slice through ice as thick as 2.5 m on the premise that the federal government was “not about to conclude that Canada cannot afford the Arctic.” That ship never got built. Today, as the climate warms, foreign icebreakers are exploring the Arctic for natural resources and asserting themselves in a region Canadians have long claimed is Canada. Clark’s icebreaker was supposed to replace a 20-year-old workhorse. Thirty-five years later, the CCGS Louis S. St-Laurent is still in service—and the Coast Guard likely won’t replace the country’s lone heavy icebreaker for at least another decade.

Canada’s frustrating, unending quest to build a new heavy icebreaker that can patrol Arctic waters is a mess of budget cuts and delays that no government has cleaned up. In 2008, then-prime minister Stephen Harper promised another ship, the Diefenbaker, first slated to be seaworthy by 2017. But the shipyard that won the contract, Vancouver’s Seaspan, lost the work in 2019 after too many delays. Last February, the feds pegged the new delivery date to the end of 2029 but haven’t officially reopened the bidding process.

No one is waiting for Canada. A U.S. Coast Guard analysis in 2017 counted 93 icebreakers in service or under construction around the world. The Russians, whose icebreaker fleet reportedly numbered 46 in 2017, are adding to their nuclear-powered roster. Their newest ship, the Arktika, set sail last September and marks the country’s latest effort to establish a northern sea route that could rival the Suez Canal. China, a nation with no claim to Arctic waters, has built its own, and growing, fleet of icebreakers. The U.S. Coast Guard has responded with plans to build its own massive ships.

Canada’s major shipyards haven’t twiddled their thumbs. Seaspan just finished its third fisheries science vessel for the Coast Guard—and has teamed up with Ontario-based Heddle Marine to renew an eventual bid for the lost Diefenbaker contract. Irving’s Halifax shipyard is building a new class of Arctic patrol vessels that can cut through 1.2 m of ice, the first of which will be commissioned next summer. And Quebec-based Davie, which is converting three vessels into mid-sized Coast Guard icebreakers, wants to beat out Seaspan-Heddle for the Diefenbaker job.

Canada’s shipbuilders are fiercely competitive. Seaspan and Davie both claim to be the only companies with the shipyards and supply chains to build the Diefenbaker. Both say the others’ claims are misleading. Both have also fallen behind on other jobs. Seaspan’s delivery of two replenishment vessels for the Navy is five years behind schedule, and two of Davie’s converted icebreakers have also faced hurdles.

But the rivals agree on the need for a new icebreaker in what Seaspan CEO Mark Lamarre calls “Canada’s home ice.” More resource exploration, scientific research, commercial shipping and cruise traffic means more work for ice-busting ships. “We’re even seeing 50-foot sailing vessels using the Arctic Ocean as a highway,” says Lamarre. “Canada’s at risk of falling behind, quite frankly.”

Spencer Fraser, the head of Davie’s parent company, Inocea Group, says the feds took a “courageous step” by relaunching the competition for the Diefenbaker work. “What we don’t want to have is a catastrophic failure of a major system on the Louis S. St-Laurent, and then Canada finds itself without an Arctic icebreaker,” he says.

Bob McLeod, Northwest Territories premier until 2019, told Maclean’s before he left office that Canada should build at least three icebreakers and the same number of deep-water ports in the North. Premier Caroline Cochrane hasn’t endorsed those specific priorities, but in a statement to Maclean’s, she did recognize the world’s eyes are looking north: “If Canada wants to retain its effective power and influence in what amounts to its own backyard, it needs to make sure it clearly understands its interests in the Arctic and is prepared to back up those interests with the kind of solid policy and strategic action that other countries are adopting.”

The Department of National Defence is planning to ratchet up its Arctic presence. A spokesperson said the first of the Navy’s Arctic patrol vessels, HMCS Harry DeWolf, will join maritime exercises next summer. Within three years, five more of those ships should be in service. The military is also hoping to finish construction next year on a long-promised deep-water refuelling facility, first announced by Harper in 2008, on the northern tip of Baffin Island.

The spokesperson says the pandemic could cause further delays in opening that port. But anyone who’s kept an eye up north knows that patience is the rule, not the exception. In Canada’s Arctic, 2021 is the new 1985.

This article appears in print in the January 2021 issue of Maclean’s magazine with the headline, “Home ice disadvantage.” Subscribe to the monthly print magazine here.