Can love propel a Democrat to the White House?

If U.S. politics is a sea of rage, Cory Booker and Tulsi Gabbard are swimming against the tide. It sets them apart but ... there be monsters 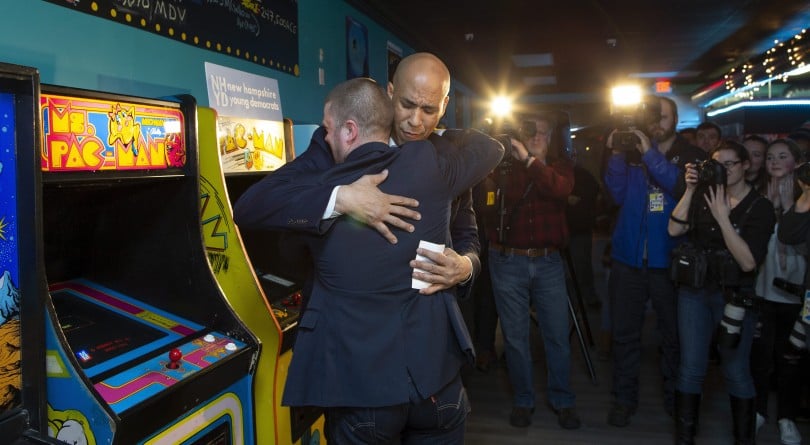 Senator Cory Booker embraces a member of the New Hampshire Young Democrats during a campaign stop at the Electric Avenue Arcade in Manchester, N.H. (EPA/CJ GUNTHER)

There are halls in New Hampshire that are so old that Abraham Lincoln lectured there, but this isn’t one of them. It’s a retro-video arcade and beer bar on a side street in downtown Manchester, which is the largest city in the fifth-smallest state in the U.S.A.

On this frigid February evening, 49-year-old Cory Anthony Booker is standing with his back to an old Pac-Man machine and singing the Eddy Grant song for which this emporium is named: Electric Avenue. (The song itself was named for the street in Brixton, London, where racial tensions exploded into violence in 1981.) Booker is the junior of the two U.S. senators from New Jersey and the former mayor of the city of Newark. The senior senator from New Jersey recently escaped a federal court with a mistrial on eight counts of bribery, three counts of fraud, plus sundry other alleged crimes. Like at least four score and seven dozen other Democratic solons, scions and socialists, Booker is running for president. Most early polls rank him firmly in the top five at the campaign’s infancy.

“I look around and I see my childhood!” the candidate is croaking, beaming at the Tron and Ms. Pac-Man consoles and the ball-and-flipper pinball machines and other King Tut-era antiquities, having already lost his voice with 21 months of campaigning still to come. “You think I’m not a fighter? I will challenge anyone in the Senate to any one of these games!”

“Donkey Kong got nothing on me!” the candidate hollers.

It is Booker’s fourth and last public appearance of the day. Twenty reporters and a dozen camera crews traipse behind the lithe and hairless hopeful—he played tight end at Stanford—from stop to stop to stop. A campaign staffer slumps on a banquette by the entrance; he’s heard all these strident stanzas and hopeful promises before, but the voters here may not have. Only 50 weeks remain until the New Hampshire primary; 620 days until the final faceoff against Donald Trump. Hence the shouting and the orating and the frantic pace reflective—already! —of what the Rev. Dr. Martin Luther King, Jr. King called “the fierce urgency of now.”

“We in this country have all of that common pain,” Booker poetizes to the eager, youngish crowd. “But we’ve lost that sense of common purpose.”

“In this country,” he rues, “people are treated better if they’re rich and guilty than if they’re poor and innocent!”

He talks about how this experimental republic was “founded by imperfect geniuses”—men whose constitution demeaned Native Americans as savages and enumerated slaves as fractional humans, and whose supposedly-enlightened documents never included the word “women” at all. Two and a half centuries later, Cory Booker says, “we still have a poverty of empathy and a poverty of compassion.”

“But the story of America is not done yet,” he avers, as must they all. Otherwise, the republic ends with Donald Trump.

RELATED: Kamala Harris’s father is slamming her for making a ‘travesty’ of her Jamaican heritage

The issues that truly haunt this richest, poorest country—infant mortality, childhood hunger—predate the current president, Booker says, “and if we beat Trump and we say ‘Okay, we’re done,’ then we just go back to 2008 and all the problems are still there.”

He reminds us that he still chooses to live in one of Newark’s grimmest neighbourhoods—one of America’s many Brixtons—and that he partnered with Senate Republicans, and even with Trump-in-law Jared Kushner, a fellow New Jerseyite born to much more comfortable circumstances, on a reform bill that allows some prison inmates to be released earlier for good behaviour.

Now he tells a truly uplifting story about the courageous activists, black and white, who stared down racist redlining so that his own parents could buy a home on a street in white middle-class Newark, half a century ago—men and women who took a stand in the street when they could have sat on their couches. But where is that spirit today, in the age of Trump?

“The fabric of American society,” the senator tells us, “has been torn by the moral vandalism of the moment.” There is only one way to repair that rend.

“You came here tonight because of a conspiracy of love,” the senator says.

A conspiracy of love. It’s a beautiful phrase, a disc that Sly & the Family Stone might have pressed, back in the year when Cory Booker was born, that incredible summer of Woodstock and the first men on the moon. In fact, it is so beautiful that the junior senator from New Jersey has been using it on the stump since 2017, if not earlier.

Thus does the son of Newark intend to differentiate himself in the most numerous and diverse presidential field ever to mount a soapbox. (He also is the only bachelor and one of the only two vegetarians in the Democratic field so far. We’ll meet the other in a moment.) Bernie Sanders and Elizabeth Warren are angry—angry at the banks, angry at the corporations, angry at the millionaires even as they harvest millions of dollars in donations to fuel their fury. Kamala Harris is a ferocious prosecutor of predatory lenders and drunken high-school jocks; Kirsten Gillibrand a fearless advocate for women; Joe Biden a lunch-bucketeer who put in 30 years at the plant; Amy Klobuchar a reasonable Minnesotan mom. When Beto O’Rourke figures out what he stands for, he will let us know.

RELATED: Seven signs Joe Biden is gearing up to run for U.S. president

Cory Booker is going to be all about the love.

“People tell me, ‘If you’re gonna beat Trump,’ you’ve got to bring it,’” he says. “Well, that doesn’t mean you’re got to bring what he brings, because that’s what he wants.”

“You can’t lead people if you don’t love the people,” Cory Booker says, and we all pinball out into the snow.

There are halls in New Hampshire that are so old that Abraham Lincoln lectured there, but this lecturer is no bearded Abe. She’s a young woman, only 36, one year above the constitutional threshold for the presidency.

“I come to you with deep love and respect,” she is saying.

It is earlier on the same day as Cory Booker’s Donkey Kong colloquy, an hour’s drive toward the Atlantic coast, in the 19th-century Centennial Hall in the village of North Hampton, N.H. A crowd of a couple of hundred has come to see Rep. (and Army Major) Tulsi Gabbard, Democrat of Hawaii, bring her own presidential love-in to the Granite State.

No poll that this correspondent has seen ranks Tulsi Gabbard in the top five. But it is early, and she is earnest and experienced and—if it matters, if it even is permissible to say this anymore—she has a very lovely face.

In North Hampton, there’s an elderly woman in the front row on oxygen; the rest of the citizens are breathing optimism and curiosity and abhorrence of the current White House occupant. Thornton Wilder’s Our Town was set in a New Hampshire village like this—This is the way we were: in our growing up and in our marrying and in our living and in our dying …

Like her listeners, Tulsi Gabbard—born in American Samoa, the daughter of a Hawaii state legislator, a Hindu vegetarian by choice, elected to the state assembly at the age of 21 and the veteran of two terms of duty in Iraq with the Army National Guard—blames Donald Trump for “the corruption of spirit that is pervading our country today.” She looks across the American landscape and sees “people seeking more power, people seeking more money, people seeking more fame by fomenting hatred and bigotry between us.” 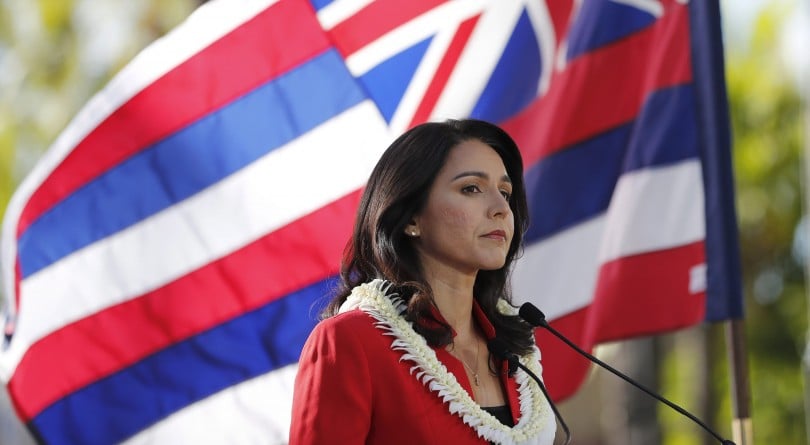 As her state flag flies in the background, U.S. Rep. Tulsi Gabbard, D-Hawaii, announces her candidacy for president in Waikiki on Feb. 2. (AP Photo/Marco Garcia)

“Aloha!” reads a business card that her staff has placed on every chair at Centennial Hall. “There is a wave of kindness spreading across the nation. Join us by committing random acts of kindness for each other!” Every voter entering gets a made-in-China artificial-flower lei.

Like Cory Booker—and unlike the choleric Bernie Sanders, whom she endorsed in 2016—Tulsi is running on love.

“We are all children of God,” she assures us.

Then she scares the heck out of us by saying that “there is a greater risk of nuclear catastrophe than ever before in history.”

“But what could be more domestic than our own existence?”

If twenty-odd Democrats run for the White House, that leaves 330 million other Americans with a choice to make, or at least the minority of those citizens who have reached the age of majority who actually show up to vote.

Patty O’Day-Senior, who is from just over the state line in York, Maine, has endorsed Tulsi Gabbard. She’s regular folk. But like many of her sisters and brothers in this country in this insane electoral season, O’Day-Senior retains the confidence—or the fantasy—that her vote counts as much as the beautiful George Clooney’s or the wealthy Sheldon Adelson’s. She believes that Tulsi is the person to carry the American republic toward 2026, when it will turn 250 years old.

RELATED: The terrifying depths of Donald Trump’s ignorance, in a single quote

“She’s a very quiet peace-talker,” O’Day-Senior says. “She might be able to bridge the gap between all this anger.”

It is not the woman’s first election; she can remember seeing John Fitzgerald Kennedy speak from the tail of a train. “I’ve supported a few people politically who hurt me,” she says. “I’m not pie-in-the-sky anymore.”

Others in North Hampton are not as particular about who will succeed Donald Trump, just as long as someone does, and soon. A elected member of the local Board of Selectmen named Larry Miller echoes this plaint—“I have nothing good to say about Mister Trump,” he says. “He makes me hungry for new ideas and new people. He makes me hungry for anybody else.”

“I bet she could field-strip an M-16 a lot better than I could,” Larry Miller says.

“I think he’s kind of lost,” Patty O’Day-Senior observes of the incumbent. It is a tender, almost charitable sentiment, one that will not often be heard as the contest to depose The Donald gathers momentum, and viciousness and rage.

“Do you feel sorry for him?” she is asked.

“Yes I do, in a way. I don’t feel that he had any good examples growing up.”

“I’m on the board of the Democratic committee,” Patty O’Day-Senior says.

“So you’re an old political hack!” a wanderer gasps. It’s a snowy day in New Hampshire, first steps on the long, long trail.

“No,” says the woman. “I’m the refreshments person.”